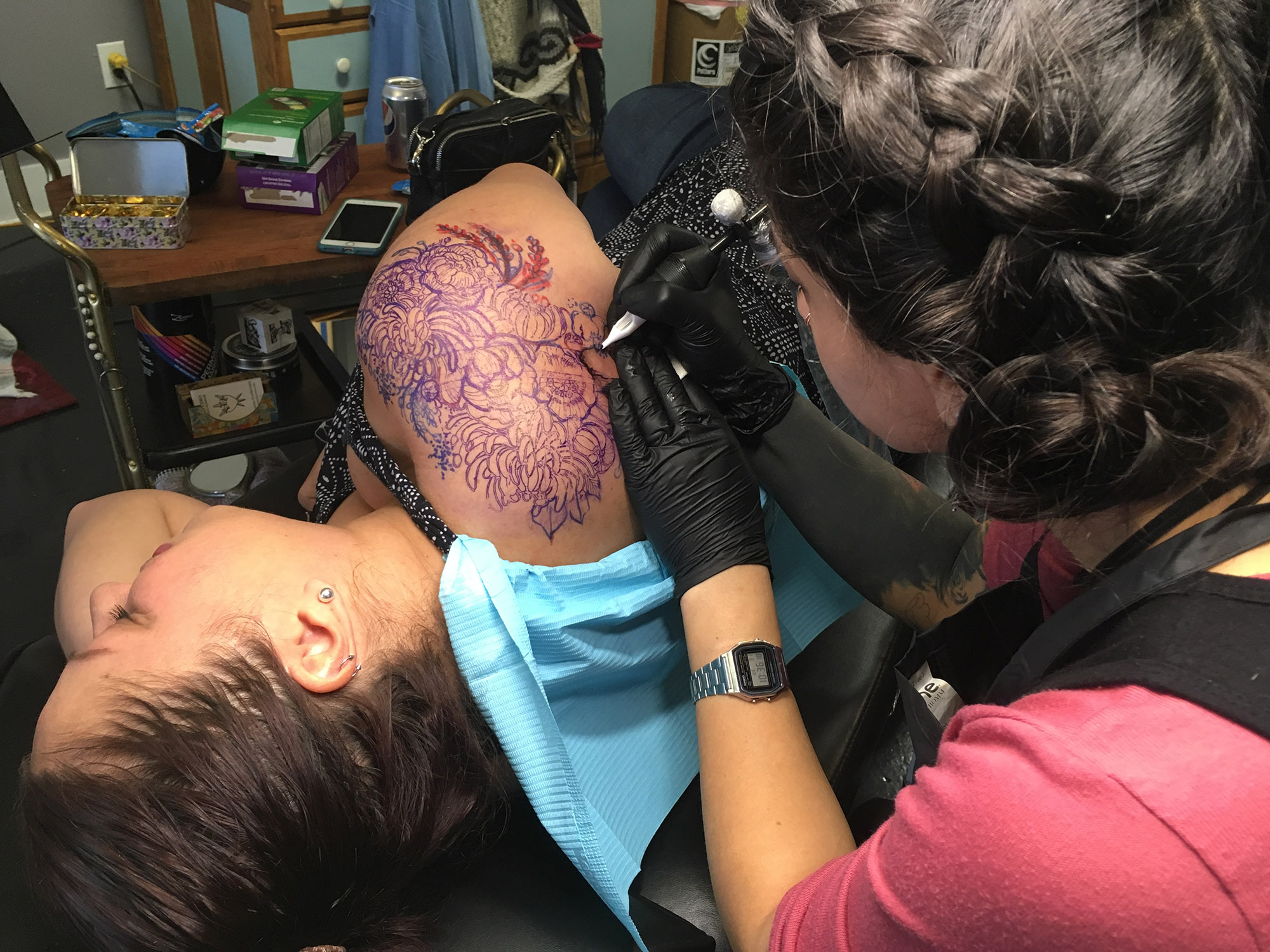 A year ago, 2112 Angier Avenue was an empty storefront sitting next to the local barbershop.

That all changed last May, when Durham native Samantha Castrovinci opened her own private tattoo studio, The Studio, after 10 years of tattooing and months of deliberation.

“I scoured the internet for six months looking for a place to set up,” Castrovinci said. “I actually visited this place four times, and I called to ask if I could look at it one more time, and the lady said that if I paid the down payment, I could look at it as much as I wanted.”

From the street, The Studio does not resemble a tattoo shop. A simple sign depicting its name sits above the large windows. It does not have the neon “TATTOO” sign that most shops display to draw customers in. A sign hangs below the door handle, politely saying “Private session in progress. Do not disturb.”

Inside, the only indication of the large room being a tattoo studio are the tattoo guns on a desk beside a single tattoo chair. An acoustic guitar rests in a stand beside a small piano pushed against the wall. String lights hang from the ceiling. Paintings and large mirrors adorn the walls. A small cooler full of drinks for customers is nestled beside a sink. Gentle music wafts through the room.

“I was a little hesitant about having a storefront at first because I didn’t want to do walk-ins,” Castrovinci said. “With private sessions and uninterrupted quiet, there is a greater flow of creativity between me and my clients. I can focus on each piece and appointment individually.”

Her first customer of the day is Regina Kent from Raleigh, who already has some of Castrovinci’s handiwork on her ankle.

“I’ve wanted it for a long time, but couldn’t find the right person to do it,” Kent said, waiting for Castrovinci to finish creating the stencil of her tattoo. “I looked everywhere, and was willing to fly out to whoever I liked. Then I found ‘Sam’ on Instagram, and was lucky that she was only a 45-minute drive from my house.”

Kent has gotten tattoos in several cities across the U.S., but chose Castrovinci for this tattoo because she enjoys her style.

Booking the appointment in advance only made the experience more exciting for Kent.

“I was also a bit more nervous, because I forgot how much it hurts,” she laughed.

In her nearly 11 years of tattooing, Castrovinci has grown more accustomed to turning down certain tattoo ideas and directing clients toward a better idea.

“My first year had a lot of interesting ones because I didn’t have the courage to tell them it was a bad idea. Now I’ve developed the confidence to tell a client ‘Maybe we should do this instead.’”

The Studio’s next-door neighbor, barber Samuel Jenkins of Samuel and Sons, was quick to offer his admiration of Castrovinci and her work with tattoos, encouraging people from across North Carolina to learn about and reach out to her for their tattoo needs. He recently visited her for a large snake coiled on his upper left arm.

Aside from tattooing, Castrovinci is an artist in many other forms. She creates custom-made skateboard designs and wooden wall art. She also sings and plays guitar in a two-woman band called the Eno River Rats.

For those interested in tattooing, art, or live music, Castrovinci will be hosting The Studio’s one-year anniversary at 2112 Angier Ave, as well as her 11-year anniversary of tattooing, with an open-mic night and art gallery on May 25. She will be offering simple tattoos at varying prices picked from a sheet of quick tattoos. Proceeds will go towards a local charity, but Castrovinci has not yet decided which one.

To book an appointment or see some of Castrovinci’s work, visit creativetattooservice.com