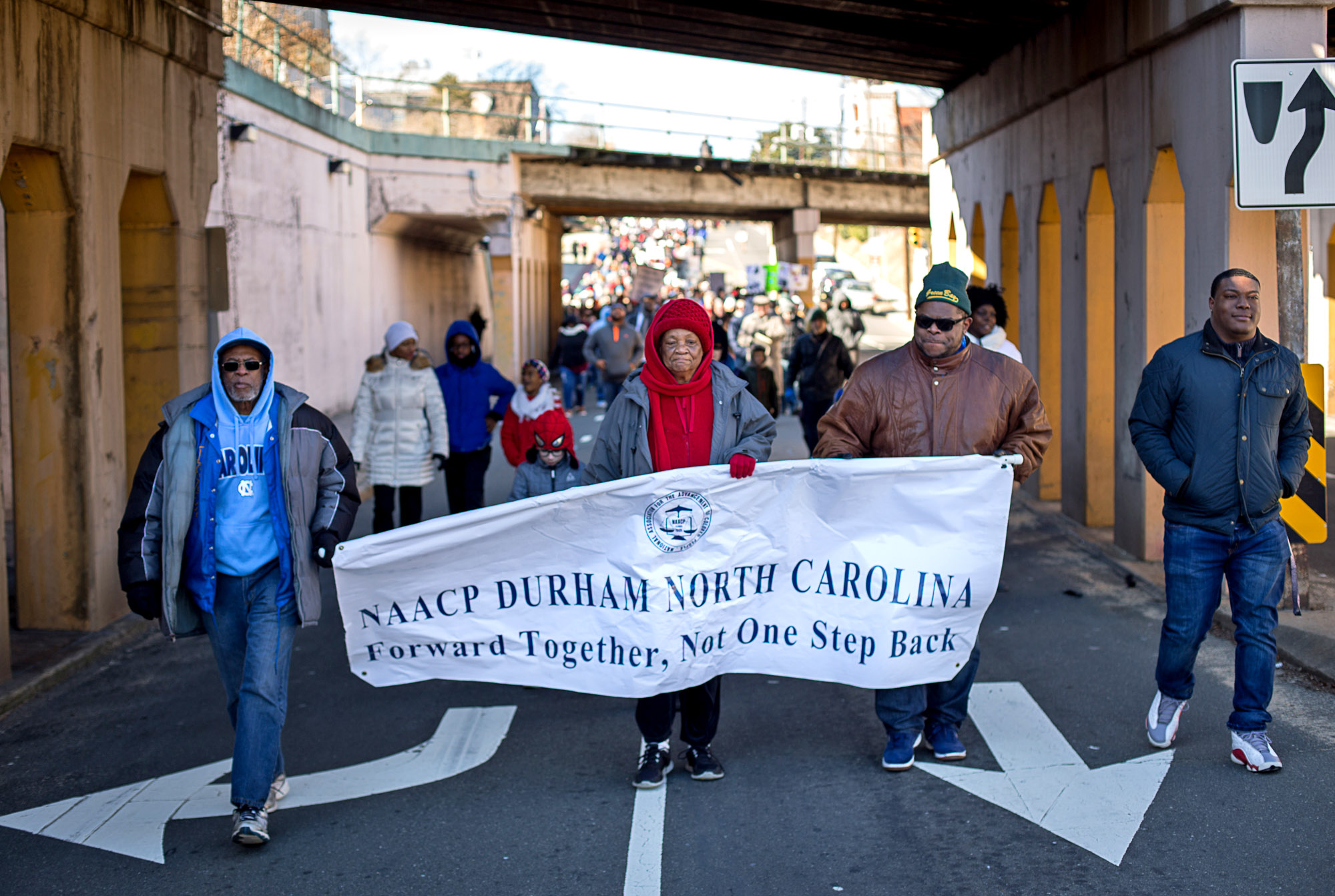 Making its way on a chilly, 17-degree morning through downtown Durham on Martin Luther King, Jr. Day, a mass of a few hundred marchers keeps pace behind a banner for Durham’s National Association for the Advancement of Colored People: “Forward Together, Not One Step Back.” (Staff photo by Tenley Garrett)

It is below freezing, but Antwon Styles grips his daughters’ hands, joining hundreds of marchers in downtown Durham for the Martin Luther King Jr. Day Unity March and Rally on Saturday, Jan. 15. Audrina, Antwon’s fourth-grader, holds a sign that reads “For the Children” adorned with hearts and smiley faces. 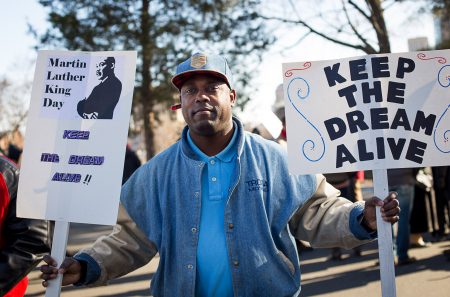 Durham holds a history rooted in civil rights activism. King himself visited Durham many times. Audrina said the march is helping her learn about King, since she does not learn much about him in school.

“We do [the march] every year,” Styles says. “I bring my two daughters. You know, I do it for them, so they can know their history.”

The march began at the North Carolina Mutual Life building, one of the most influential African-American businesses in America, said Kimberly Williams Moore, vice president of marketing and external relations for the North Carolina Mutual Life Insurance Company. Williams Moore said this march saw more groups participating, since the political climate has mobilized many activists.

“I’ve done these marches for several years, I ain’t gonna lie, and it ain’t never looked like this before!” she said. 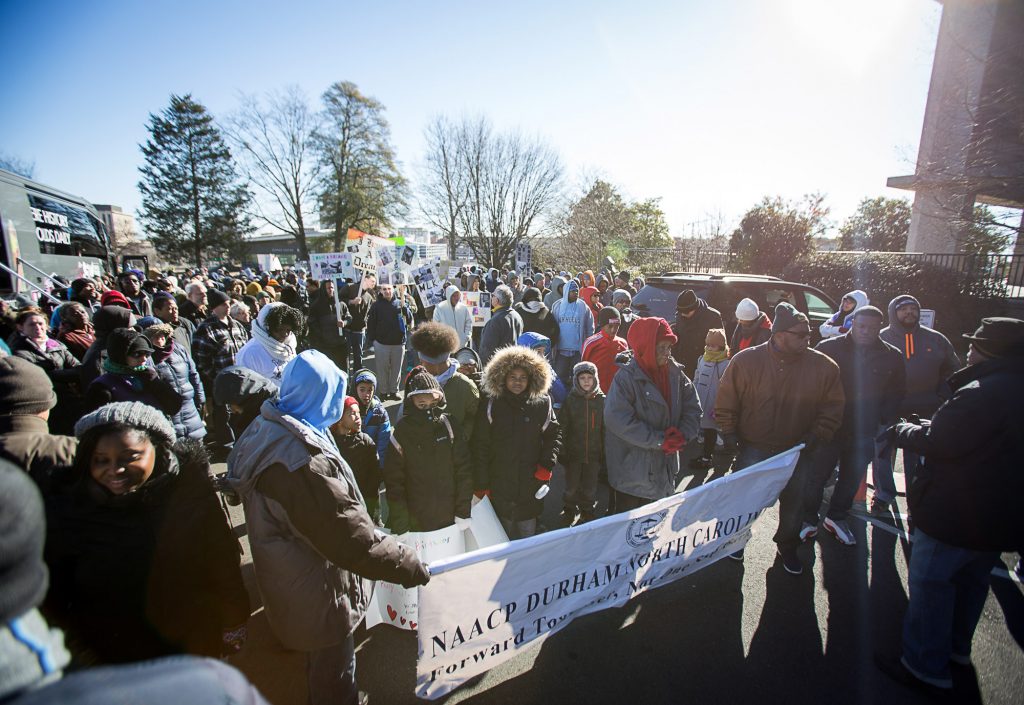 The crowd grows in numbers as the morning’s festivities commence. Among those who spoke at the rally were vice president of NC Mutual Life Kimberly Williams Moore, Durham Board of Education member Mike Lee, Children First preschool founder Donna King, and chairwoman Wendy Jacobs of Durham County Commissioners. Jacobs’ words were brief, but struck at the core of the day’s message: “We know that love is what will conquer hate. That was Dr. Martin Luther King’s message to us, and now more than ever we know that that is the truth. Love over hate!” (Staff photo by Tenley Garrett)

Harvey Ferrell marched with the Alpha Phi Alpha Fraternity alumni, Beta Theta Lambda Chapter, one of the first African-American fraternities. His fraternity, which names King as an alumnus, participates in the march every year.

“I just enjoy the spirit that seems to come with the day,” he said. 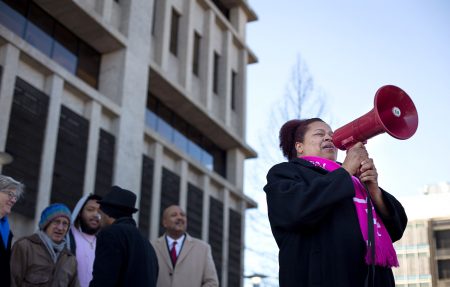 During opening remarks that preceded the march and rally held in downtown Durham on Martin Luther King, Jr. Day on January 15, a rendition of ‘Amazing Grace’ was sung to a crowd of about 800 marchers. (Staff photo by Tenley Garrett)

Before the march began with the singing of “Amazing Grace,” the children were asked to move to the front. As children held up their handmade signs, Mike Lee, chair of the Durham Public Schools Board of Education, spoke to the crowd.

After weaving through the streets of downtown Durham, the march concluded at the First Presbyterian Church on East Main Street where participants attended a rally hosted by the MLK Steering Committee. The Durham Children’s Choir opened the rally by singing “Imagine” by John Lennon.

The service featured state and local politicians who spoke about King’s legacy.

Congressman David Price, whose congressional district includes Durham, called on the crowd to work together to advance King’s vision of progress. Price said America is regressing and people are neglecting certain groups. 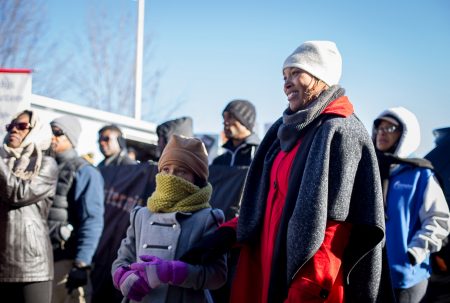 A mother stands beaming with her daughter as Kimberly Williams Moore, vice president of the NC Mutual Life Insurance Company, shares a few words of encouragement on the cold day. (Staff photo by Tenley Garrett)

“This holiday this year is not about nostalgia,” Price said. “It’s not about some vague goodwill. We’ve got to confront these challenges.”

Wendy Jacobs, chair of the Durham County Board of Commissioners, praised Durham for its commemoration of the day.

“We don’t have any other national holiday that we celebrate like we celebrate Dr. King’s birthday,” Jacobs said.

Echoing Price’s sentiment, Jacobs called on the crowd to work together.

“We can draw strength from each other and inspiration, so that we can continue the rest of the year to try to live up to the dream of Martin Luther King,” Jacobs said.

Organizations like Bull City United are advocating for nonviolence in Durham, Jacobs said, and last year Durham saw a reduction in the homicide rate. The city needs to work until that rate reaches zero, she said. 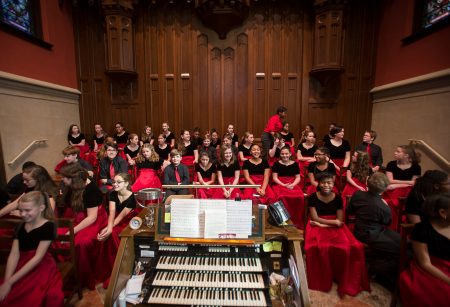 Steve Schewel, the newly elected mayor of Durham, said King had strong ties to Durham and had planned to be there at the time of his assassination but changed his plans.

Schewel asked the community to use the past as motivation to change the future. He called for public monuments to the Confederacy to be removed and replaced with better representations of Durham.

The crowd had clapped for the other speakers, but applauded thunderously in response to Schewel’s statements in particular.

Voices echoed throughout the nave in celebration and King’s words came alive: “All of God’s children, black men and white men, Jews and Gentiles, Protestants and Catholics,” joining hands and singing, pledging to overcome.

“We can keep Dr. King alive by doing this — by the way we live our lives,” Jacobs said. 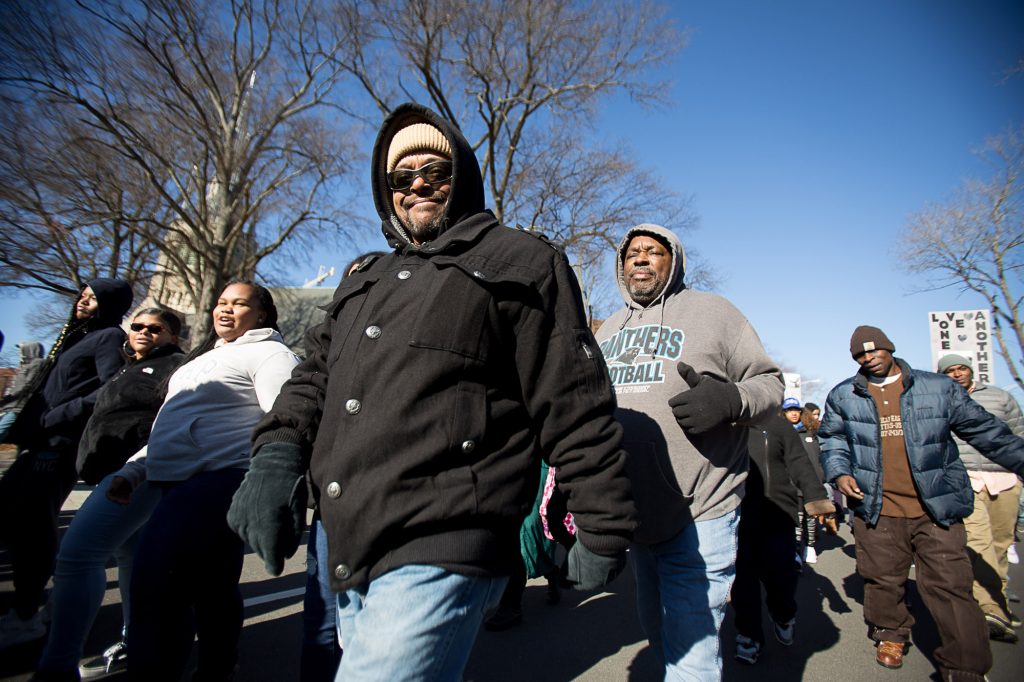 A man stands out among a thronging crowd of a few hundred optimistic marchers on the morning of MLK Day. Despite the clear skies and sunshine, temperatures kept hands deep in coat pockets until the crowd arrived at Durham’s First Presbyterian Church to conclude the march. (Staff photo by Tenley Garrett) 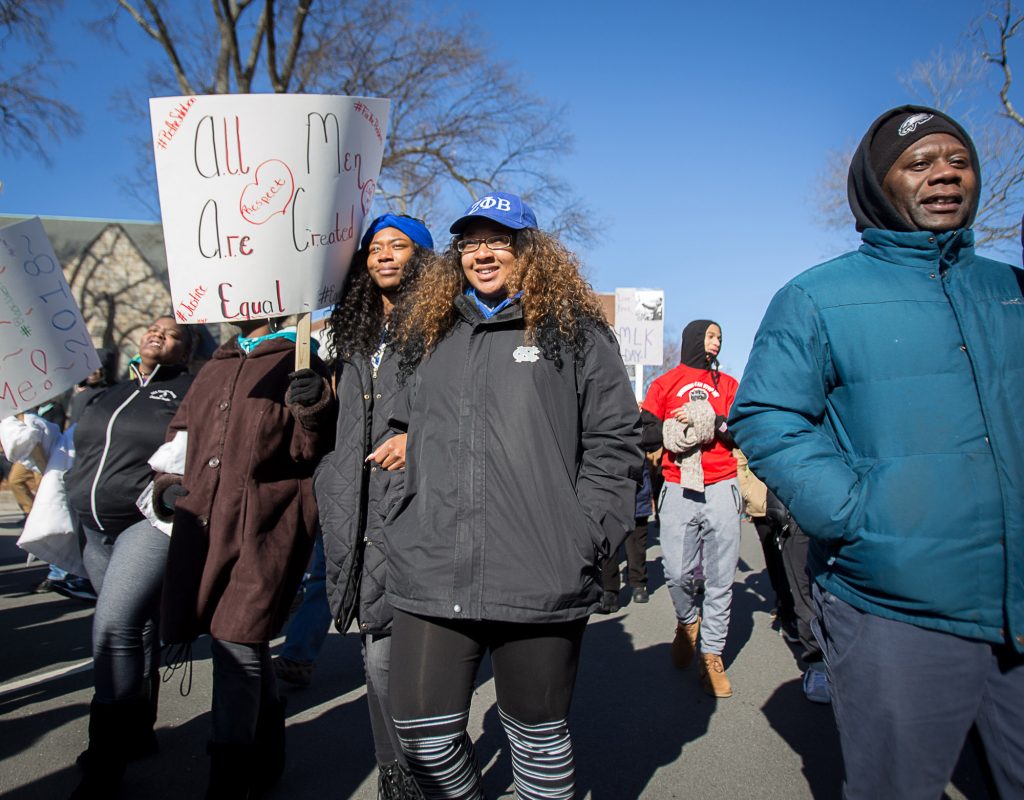 Two young women march together through Durham on the morning of MLK Day, layered up in leggings, jackets, hats and gloves with smiles on their faces as they press forward through the sub-twenty-degree weather. Beside them marches a sign reading: “All Men Are Created Equal.” (Staff photo by Tenley Garrett) 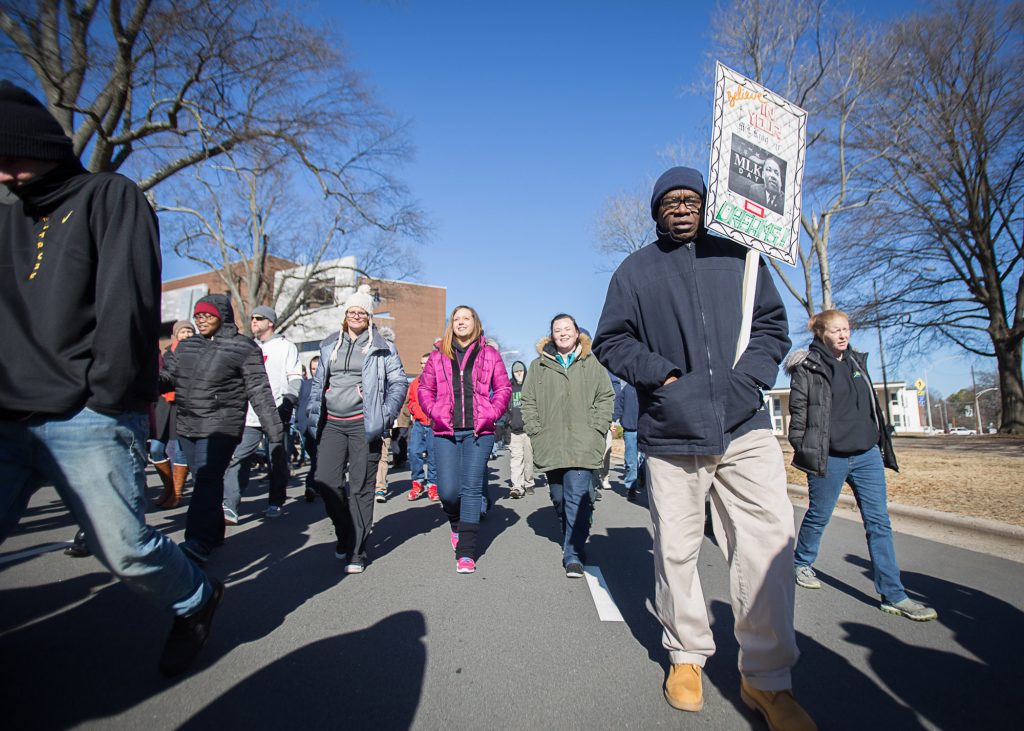 Cold temperatures presented no challenges to the marchers in Durham on the morning of MLK Day. The crowd kept spirits high through cheering and singing in celebration of the late Reverend Martin Luther King, Jr. (Staff photo by Tenley Garrett) 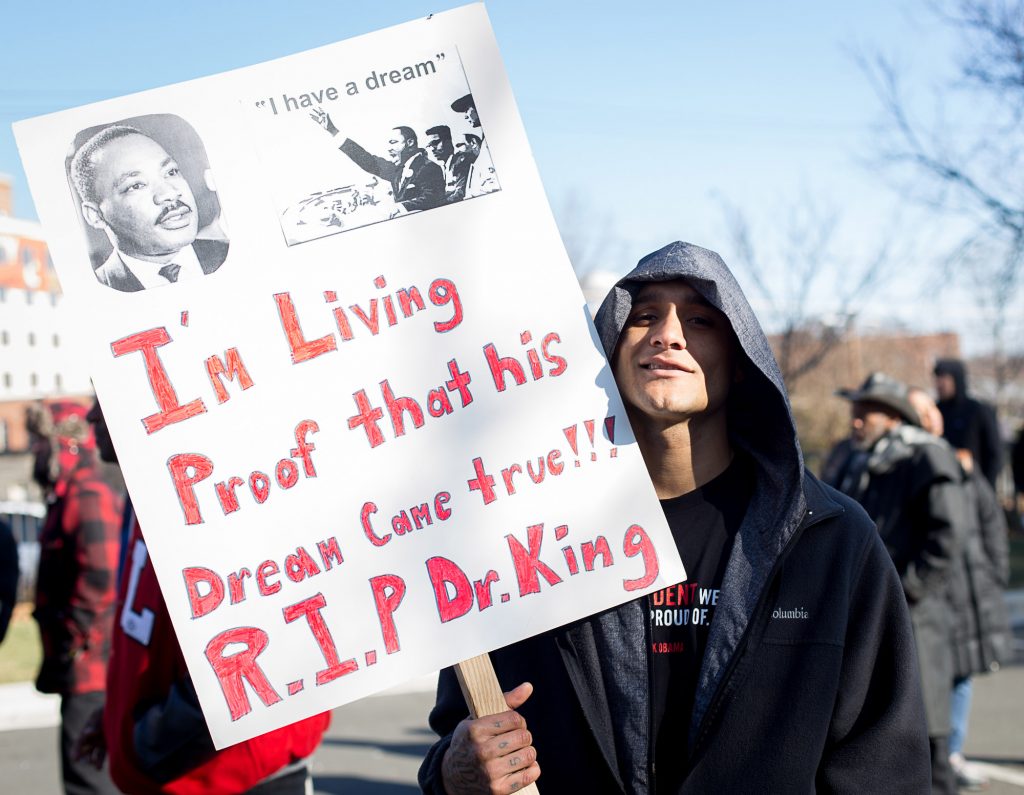 Devon Woodard was one of dozens who held up signs with pride, from the rally in the NC Mutual Life Insurance parking lot to the First Presbyterian Church roughly a half mile into town. (Staff photo by Tenley Garrett) 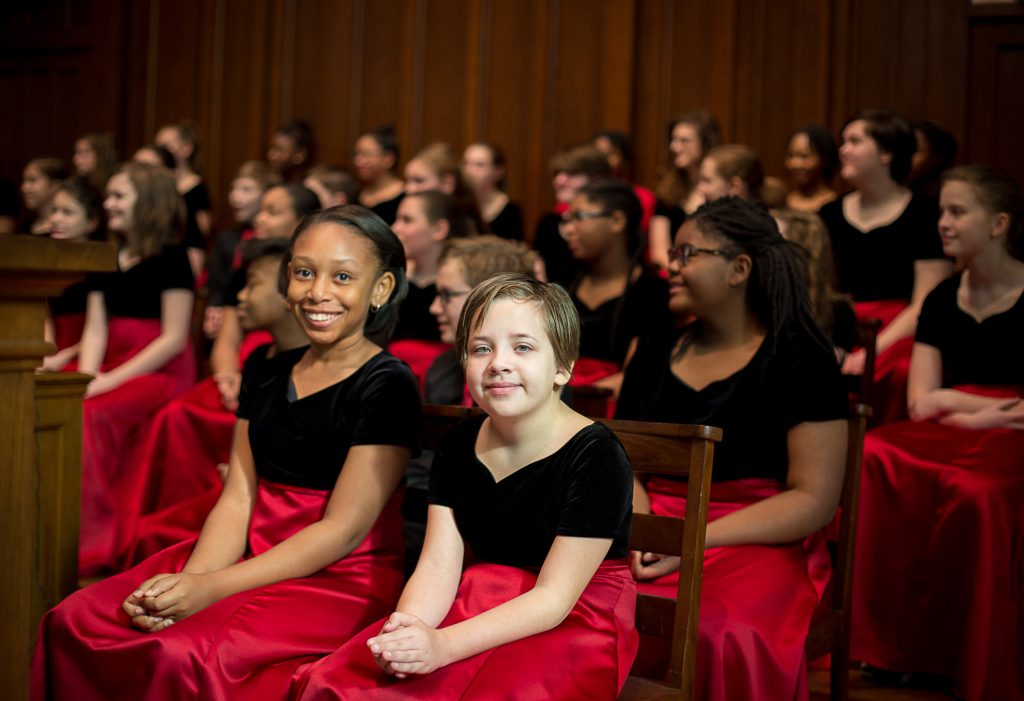 Two girls (Elyssa Taylor, left, and Eden Cody, right) from the Durham Children’s Choir wait patiently for the start of the service, during which they will sing John Lennon’s ‘Imagine’ and ‘We Shall Overcome.’ (Staff photo by Tenley Garrett)

Katie Rice is a senior journalism and Hispanic literatures and cultures major at UNC-CH. This spring Katie is serving as co-editor of the Durham VOICE.

Tenley Garrett is a junior photojournalism major at the UNC-CH School of Media and Journalism. An Asheville, N.C., native, she is serving as co-editor and photo editor of the Durham VOICE.