When Marvin Bagley Jr. thinks about Durham, his hometown, he sees a city that is both drastically different in some ways but strikingly similar in others compared to the one he grew up in.

Bagley Jr., the father of freshman Duke University basketball star Marvin Bagley III, moved his family from California to the Triangle in the fall when his son began his college career with the Duke Blue Devils.

“Downtown Durham was almost abandoned, and now there’s big-time businesses everywhere. It makes me proud to call Durham home, you know. That’s a change, but a lot of the same problems remain.”

Upon returning to the Bull City, Bagley Jr. wanted to specifically address the lack of opportunities for kids. After brainstorming, he came up with a plan for the Bull City Youth Basketball League, which turned into a reality in January.

The league, which has about 65 players between the ages of 9 and 14, according to Bagley Jr., includes six teams and plays games on Sundays at Southern Durham High School. 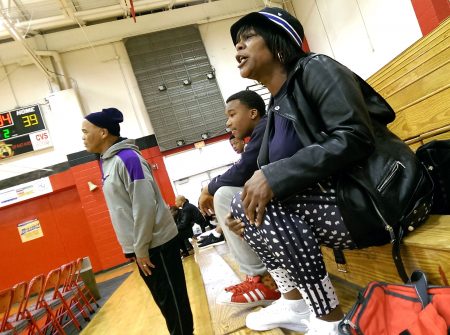 Frenchee Holloway cheers on the East Durham Bucks during the team’s game against the Southside Spurs at Southern Durham High School on Sunday, Feb. 4. (Staff photo by Brennan Doherty)

Bagley Jr. said there are no out-of-pocket costs for players because of support from his nonprofit organization, Phoenix Phamily, and a sponsorship from Nike. Participants also receive uniforms, shoes, socks, a backpack, and pre- and post-game meals.

“When I came up, there were so many times where I couldn’t participate because of money,” said Bagley Jr., who grew up in the Few Gardens public housing complex. “I couldn’t play because we couldn’t afford it, and I promised myself that if I was ever in a situation where I could keep a kid from feeling that pain that I felt, I would do it.”

The excitement on the players’ part is palpable, if not understandable. The league, in the greater scheme of things, is about more than winning or losing. But when the ball is tipped, it hardly seems that way.

In the first of this particular Sunday’s three games, the McDougald Mavericks narrowly held on for a victory against the West End Warriors, who couldn’t quite complete a late rally. Later in the day, it was Rhian Lawrence, a seventh-grader from Voyager Academy, who partially stole the show, more than holding her own as one of the few female players in the league. 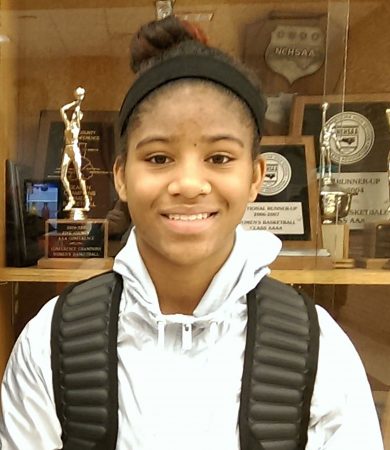 Rhian Lawrence is one of the multiple female players in the Bull City Youth Basketball League. (Staff photo by Brennan Doherty)

“It’s fun,” she said about playing with boys. “They always think they’re good. But sometimes they’re not.”

While players from all different skill levels participate in the league, the on-court product is high quality.

Noel, a former UNC and professional basketball player, was approached by Bagley Jr. about the league using Southern’s gym for games. For Noel, the decision was a no-brainer because he thought the league would allow kids to “get away for a little while” and be around positive role models.

That sentiment was echoed by Frenchee Holloway, one of the most energetic and vocal fans in the stands. Her two grandchildren play for the East Durham Bucks, and she said she supports anything constructive and productive for the youth.

“This basketball keeps them off the corners,” she said.

The Bull City Youth Basketball League could not operate without the willingness of many individuals to volunteer.

At the scorer’s table, members of the Southern men’s basketball team keep the score book and work the scoreboard. Meanwhile, Armeous Dobson III and Donnell Garrett volunteer as the league’s officials.

Bagley Jr. was also tasked with finding coaches, so he reached out to those in the community he knew from his past or with whom had connections. 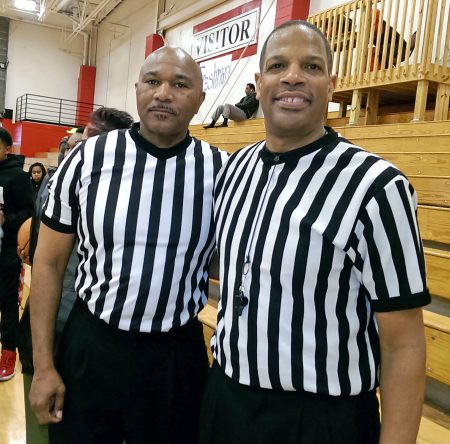 Ronald Yarborough, coach of the Hickstown Bulls, hadn’t coached before but liked the idea of becoming involved with the league.

He said the league is important for the kids because he thinks their participation helps build social skills and character and allows them to be a part of something.

Yarborough said most teams practice once a week, usually on Saturdays. He provides transportation to and from practices and games for players whose parents can’t make it because of work obligations.

“It’s a great experience for me,” Yarborough said. “I have kids of my own, but to actually have someone trust you with their kids and be responsible for them, it’s a great responsibility.”

“We wanted to give coaches a chance to give back because it’s helping the kids,” he said. “But it’s also helping the coaches, too.”