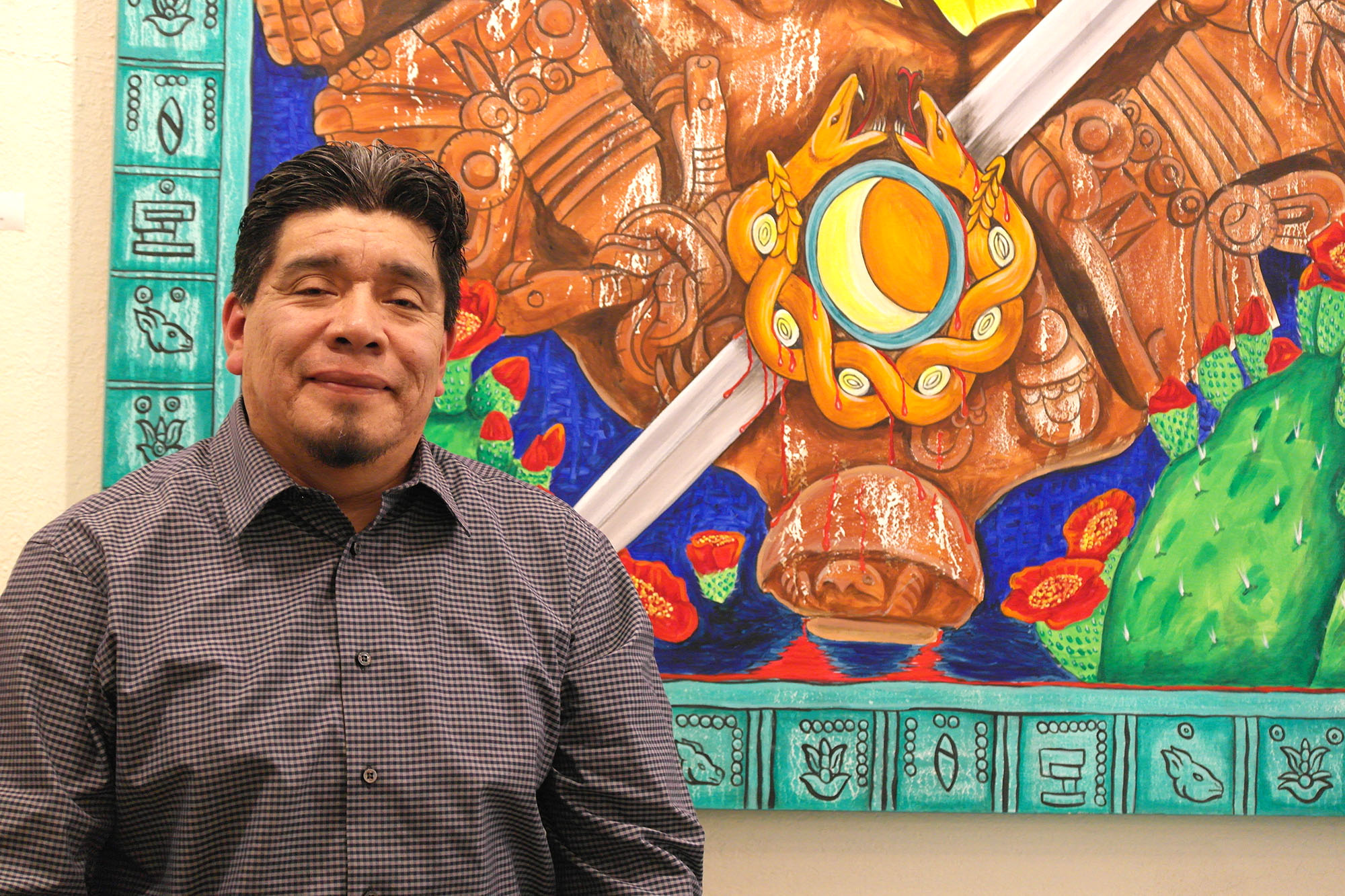 When Cornelio Campos arrived in the United States in 1989, he knew no English and next to no one, but he held onto his childhood dream of being an artist.

Nearly three decades later, he finds himself confronting the same issues he saw as a new immigrant, but now he can control the conversation.

In a gallery in Durham, Campos’ artwork was displayed in a recent exhibition about the planned elimination of the Deferred Action for Childhood Arrivals (DACA) program, and he knew his voice—and those of the other artists shown—mattered.

“The exhibition has moved people to help refer, perhaps, to the Latin American voice here in the United States,” Campos said in an interview translated from Spanish.

“DREAMers: DACA, Deportation Defense, and the American Dream” ran from Jan. 4 to Feb. 4 at Pleiades Arts on E. Chapel Hill Street in Durham. It showcased 21 pieces from local artists on the topics of DACA and immigration; most of the works showcased were by Latino artists. 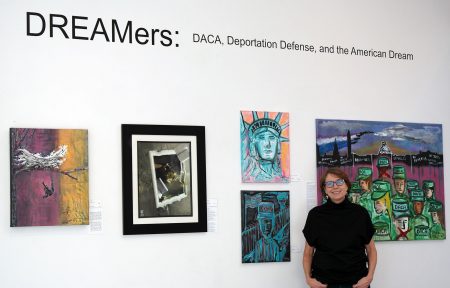 Pleiades Arts has established a place within the community where artists can express themselves about causes that matter to them. Renee Leverty said she helped found the gallery in 2013 to create a space where artists could earn a living and connect through art.

As a sculptor and welder, Leverty understands art’s power to create dialogue on social issues. The gallery’s annual show “Truth to Power” displays art on social justice causes; the various exhibitions year-round have themes like gentrification, climate change and accessibility.

“DREAMers” came out of a desire of Pleiades Arts’ board members to use the space as a voice for the Latino community, Leverty said. The gallery partnered with Alerta Migratoria, a Durham-based organization for undocumented immigrants, and the NC Dream Coalition, a group led by undocumented youth, for the show. Pleiades Arts asked these partner organizations to suggest artists.

“It makes the most sense that the communities closest to the population needed to invite the artists,” Leverty said.

The results were phenomenal. More than 10 artists and collaborators contributed to the show, and Leverty estimates that over 1,000 people saw their work. Many pieces sold, with 70 percent of profits going to the artists and 30 percent donated to the partner organizations. The exhibition extended its run beyond the original end date of Jan. 28 after Fox 50 covered it in an HOLA NC episode, which was aired that day. 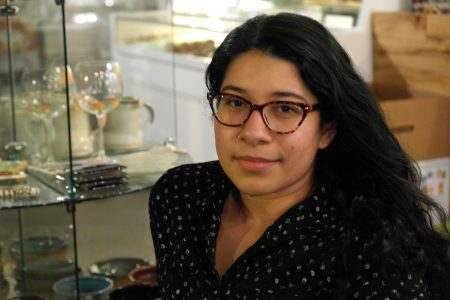 Artist Michelle Valladarez uses art as an outlet to relieve stress. Her background as an immigrant and DACA recipient inspired her painting “Building a Dream, Building America,” which was exhibited as part of the “DREAMers” exhibit. (Staff photo by Katie Rice)

“The art and the artists’ statements have received a lot of good attention,” Leverty said.

Leverty has heard visitors share their immigration stories and those of family and friends. She said members of the Latino community seem to enjoy the safe space for discussion provided by the gallery.

“It’s reminded me that I need to use my safety as a white citizen to create space for voices of those who may not feel so safe in expressing themselves,” Leverty said.

Michelle Valladarez helped Leverty gather artists for “DREAMers” and showed her painting “Building a Dream, Building America” in the exhibition. Valladarez is a DACA recipient who arrived in the United States from Honduras when she was 9.

“It was hard,” she said. “It’s not too terrible when you come here so young, I guess, and with me, I already knew some English because I was going to a bilingual school, but when I got closer to the end of high school, it started to get a little bit tougher.”

Valladarez said she did not have parental support in navigating life after high school, so she planned her future herself. She attended North Carolina Wesleyan College in Rocky Mount for a year before she had to stop, and now she works as a paralegal for Hatch Rockers Immigration, where she helps immigrants through situations she knows all too well.

Art provides an outlet for her to express herself. In “Building America, Building a Dream,” fieldworkers toil in a field of pink flowers under a bright yellow and blue sky. The piece does not reference DACA, but embodies a different aspect of the Latino immigrant experience. 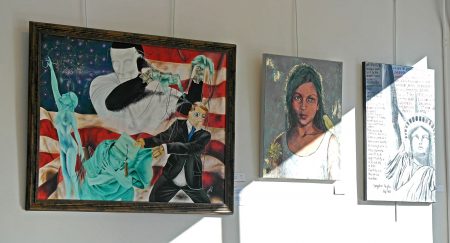 Many of the pieces in the exhibition, like “How to Dream” by Yuko Nogami (left) and “American Dream” by Leticia Alvarez (right), contrasted traditional symbols of freedom with the reality of the limitations on immigrant rights. (Staff photo by Katie Rice)

“Even if the legislation did pass to cover people who fall under DACA, there are going to be so many people that are going to be left vulnerable,” Valladarez said. “So I wanted to have a painting that served as a reminder of those people who have been trying to navigate the immigration system for much longer.”

Valladarez said she has made many connections through the show, which she attributes to its format.

“It was a lighter mood, because it wasn’t a rally or protest or something,” Valladarez said. “It was an art exhibition, so it was a change of pace from how things have been going on lately.”

Campos’ painting “DREAMers” hung next to Valladarez’s painting, and his “#DACA” piece hung across from the two. Campos is no stranger to having his work on display—he has been nationally exhibited, and he has had art displayed locally in the Bryan Center at Duke University and the Campus Y at the University of North Carolina at Chapel Hill. Campos is also a member of the board at Pleiades Arts. 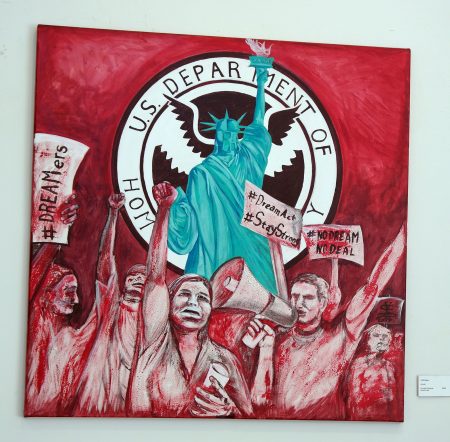 The Statue of Liberty turns her back on protesters advocating for DACA and the DREAM Act in Cornelio Campo’s painting “DREAMers.” (Staff photo by Katie Rice)

A native of Michoacán, Mexico, Campos groups his work into three categories: Mexican folklore, political art and what he calls “the art of my people,” inspired by the “purépechas” indigenous group native to Michoacán.

In this case, his art is distinctly political. In the painting “DREAMers,” protesters yell in front of an uncaring Statue of Liberty. In “#DACA,” the United States Capitol provides a backdrop to a collage of American symbols as a bald eagle’s talon clutches a dark blue graduation cap reading “DACA Dreamers.”

“Through art a person can help raise awareness because art is more visual, and that which is visual always goes more directly to your conscience,” Campos said. “And it’s a form of protest, but a form of peaceful protest.”

Campos said the show helped continue conversations about immigration. He said he has seen little change in the treatment of Latino immigrants in the United States since he immigrated and started working in tobacco fields—the same problems still exist.

There are two sides to treatment of immigrants, he said, harmful and helpful. The treatment has always been parallel, but the recent influx of Latin American immigrants has resulted in a matching increase of citizens ready to help.

Katie Rice is a senior journalism and Hispanic literatures and cultures major at UNC-CH. This spring Katie is serving as co-editor of the Durham VOICE.