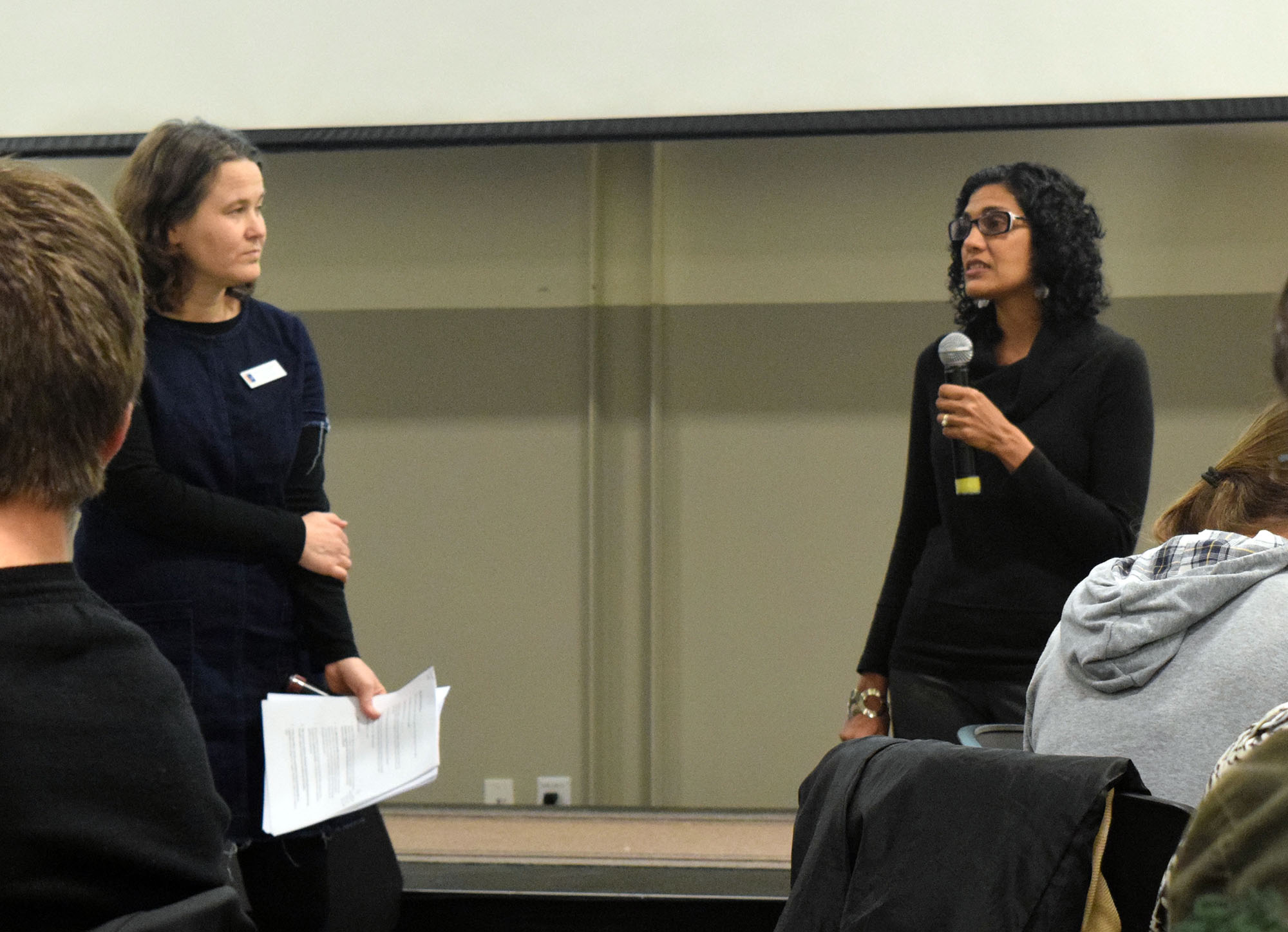 “I feel very lucky to be part of the commission addressing these issues,” said Diane Standaert, HRC chair, (left), who has been a member since 2014. Standaert, along with Sejal Zota, (right), represented the HRC during the Locked in Solidarity event. Staff photo by Zayrha Rodriguez

The North Carolina Human Relations Commission has the mission to end racial discrimination in Durham, according to their website and Diane Standaert, chair of the commission.

Two members of the HRC presented their recommendations to reform the Durham County Detention Facility at ReCity, 112 Broadway St. The presentation was part of “Locked in Solidarity”—a weeklong, Feb. 5 to 11, event series sponsored by DurhamCares focusing on mass incarceration—.

“We, as DurhamCares, recognize that mass incarceration has such profound impact in our community in so many different ways,” said Reynolds Chapman, executive director of DurhamCares.

The report was first presented to the Durham County sheriff during the summer of 2017, but the HRC made presentations of the report to educated members of the community.

One of the recommendations calls for better mental health services.

There are five times more people with mental health issues in regular jails than there are is specialized psychiatric jails, according to Sejal Zota, who is a member of HRC and was one of its presenters.

The recommendations include a community-based research team to survey staff and incarcerated persons, a civilian oversight board for the Durham County Detention Facility and creating regulations that allow public tours of the facility.

Another issue brought up by the report was the cash bail system.

The report states that this system is a “violation of the Eighth Amendment, which states that ‘excessive bail shall not be required, nor excessive fines imposed.’”

There is also fear that private companies could be profiting from the jail system.

One recommendation seeks to prevent the implementation of video-only visitation. This could have a negative effect on the families visiting, as well as the prisoners.

“It has always been free and face-to-face,” said Standaert.

The other recommendation requires more accountability and better services from the private organizations providing services to the facility. The services include the food, medical care, telephone and money services.

While the report was finalized in March of 2017, the HRC decided to change the word “inmate” to “incarcerated person” this year.

“We heard from people that were formerly incarcerated, and they said it was an inhumane term,” said Standaert. “We use language that justifies harmful policies.”

At the end of the presentation, many people wanted to know how they could help.

“Connecting with [Southerners On New Ground], donating to organizations that have been doing this work and email city commissioners,” said Standaert.

The HRC was created Oct. 7, 1986, after the racial tension was at an all-time high, after an economic boycott, when many African-American residents refused to buy from certain stores until their 88 demands were addressed.

According to the HRC website, “the goal is that these 17 voting members represent the diverse social, economic, gender, sexual orientation, ability, religious affiliations, and racial and ethnic composition of the city.”

The HRC is required to match the demographics of the city. Currently, the group is made of six Caucasians, six African-Americans, two Latinos, and two who do not belong to any of the above groups. Both genders are equally represented. All the members of the HRC are volunteers and must reside in Durham.

The HCR is looking to schedule a follow-up meeting soon with the Durham County Sheriff.

The HRC meets at the Golden Belt Office Center on the first Tuesday of each month. During their March meeting, the HRC is switching gears to focus on evictions—an issue affecting more than 900 people in Durham, Durham County sheriff’s office.