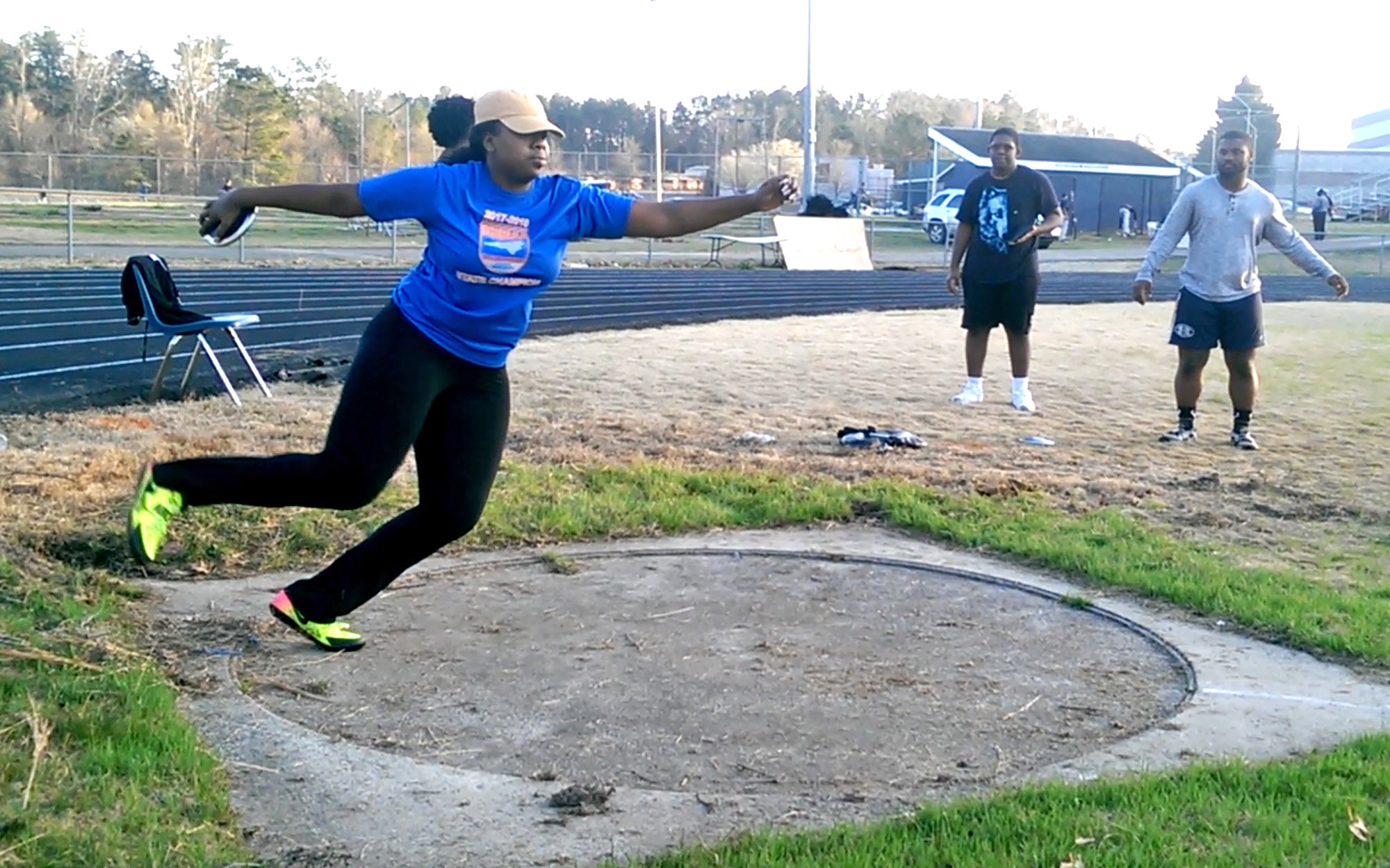 But on this Friday afternoon, she’s a coach. 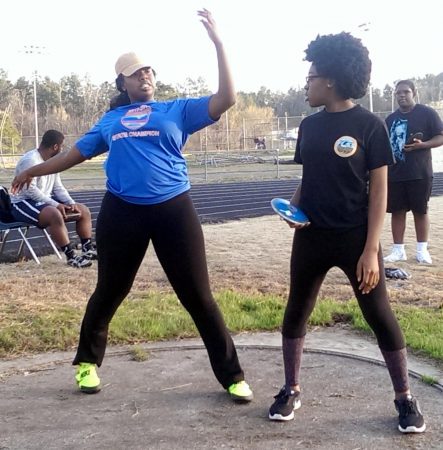 Hillside senior Kayla Beasley helps a teammate with discus technique during a team practice at Russell Blunt Memorial Stadium in Durham on Friday, Feb. 23. Beasley’s position coach, Burnice Cross, says that Beasley is “for all intents and purposes” like an assistant coach. (Staff photo by Brennan Doherty)

The final practice of the week for the Hillside High School track and field team has just begun at Russell Blunt Memorial Stadium. Her position coach, Burnice Cross, is running late, but she knows what to do.

Friday is discus day, and even though Beasley has collected her state championships in the shot put, she has expertise to lend to the four understudies who gather around her.

First up is Nelson Lee, a senior football player who’s returned to the team for the first time since his sophomore year.

He readies himself in the circle before letting loose on a throw that’s impressive, if only because he used just half of his body.

“That was all arms, but it actually wasn’t bad,” Beasley tells Lee, instructing him to generate more power with his legs.

He takes the feedback in stride because he knows a critique from Beasley is worth paying attention to.

“My first year out here, she took me under her wing and really taught me how to throw the discus,” says Lee, who describes Beasley as a “great friend and a great coach in discus.”

A few times through the rotation later, Beasley takes a turn. She releases the discus and it travels a far distance, but she immediately laments a mistake in her form. 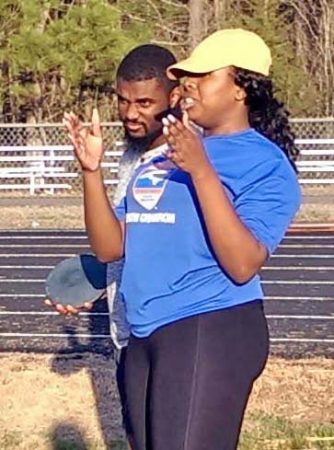 Hillside senior Nelson Lee receives feedback on his form from senior teammate Kayla Beasley during a team practice at Russell Blunt Memorial Stadium in Durham on Friday, Feb. 23. Lee describes Beasley as a “great friend and a great coach in discus.” (Staff photo by Brennan Doherty)

This time, Lee provides the analysis.

By this point, Cross has arrived at practice. He doesn’t want to interrupt what’s taking place, so he watches from the top of the bleachers as Beasley works with the other throwers.

This willingness to help her teammates is what makes Beasley valuable to Hillside, he says.

“We have a state championship we’re trying to win,” Cross says. “She can’t win it by herself. I mean, she can win her individual event, but to win as a team, everybody has to contribute, everybody has to score. That’s what she does.”

The sweatshirt tells the story.

After winning her most recent state title in February at the NCHSAA 3A indoor championships in Winston-Salem – a 3A record thanks to her 44-foot, 11.75-inch throw – Beasley poses for a picture for Hillside’s Twitter account.

Just as noticeable as Beasley in the picture is what she’s wearing. At first glance, the dark blue sweatshirt looks insignificant, but the message overlaid in white print provides insight on how she approaches her sport. 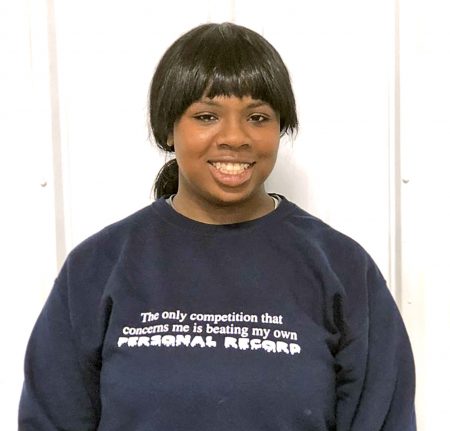 Hillside senior Kayla Beasley poses for a picture after setting a 3A state record in the shot put at the 2018 NCHSAA indoor state championships on Saturday, Feb. 10, in Winston-Salem. Beasley, who has won three state titles, focus on herself instead of the competition, as shown on her sweatshirt, which reads, “The only competition that concerns me is beating my own PERSONAL RECORD.” (Photo courtesy of Austin Hogan)

“The only competition that concerns me is beating my own PERSONAL RECORD,” it reads.

But even before all of these achievements, the message on the sweatshirt helped her stay focused regardless of how she did compared to others.

Setting a new 3A state record is an accomplishment Beasley will cherish, but more importantly, she beat herself.

“I’ve always been taught not to look at the person beside me, but to do my best,” Beasley says.

That outlook has served her well. In addition to winning NCHSAA state championships, Beasley’s success has given her the opportunity to compete over the summer with USA Track & Field. In March, she’ll compete at the New Balance Nationals Indoor in New York City. After high school, Beasley will continue her career at the college level. The only question left is where that will be.

“At the end of the day, if I perform well, I might’ve gotten a [personal record], or I might have just come out of a slump that I was in,” she says. “Or I might have just thrown what I could that day. So, it just teaches me to work on myself and not worry about what other people do.”

Cross has had a firsthand view of Beasley’s desire for personal growth. He says he knew he “had a winner in her” when she was still willing to come out to the track and practice on bitterly cold winter days during the indoor season.

Beasley was rewarded for that commitment when she brought home her most recent state championship.

“When she won, I was very, very happy – almost to tears because I know she wanted it,” Cross says. “And she worked hard for it.”

When it’s Beasley’s turn to throw at a competition, she walks in through the front of the circle, spins the ball a bit, tosses it up a few times and then readies her throwing motion.

“Every single time,” she says of this routine.

A creature of habit, Beasley does this to prepare herself mentally, which she thinks is critical to being successful.

“I tell people that it’s 25 percent strength, 25 percent technique and 50 percent mental,” Beasley says. “Because if you aren’t there mentally, your technique and your strength can be there, and you still have a bad throw because you just aren’t thinking well.”

When she started to participate in the shot put as a middle schooler, she noticed that she had the natural ability to succeed. Over the years, it’s been a matter of picking up the technique and learning how to prepare herself mentally.

Up to this point, she’s done a good job. While still unsure about where she’ll be next year, Beasley’s achievements have made the opportunity to compete in college a reality. She hopes to make a decision by the end of March and is considering UNC-Chapel Hill, N.C. State, Maryland, Howard and Central Florida.

Regardless, Beasley hopes to double major in business administration and either sports management or exercise science.

In the meantime, what’s left for Beasley to improve upon at Hillside as the spring season begins?

“Numbers, honestly,” she says. “Even though my numbers are good, I get a lot of looks from my numbers. I can always improve.”

The sweatshirt says as much.