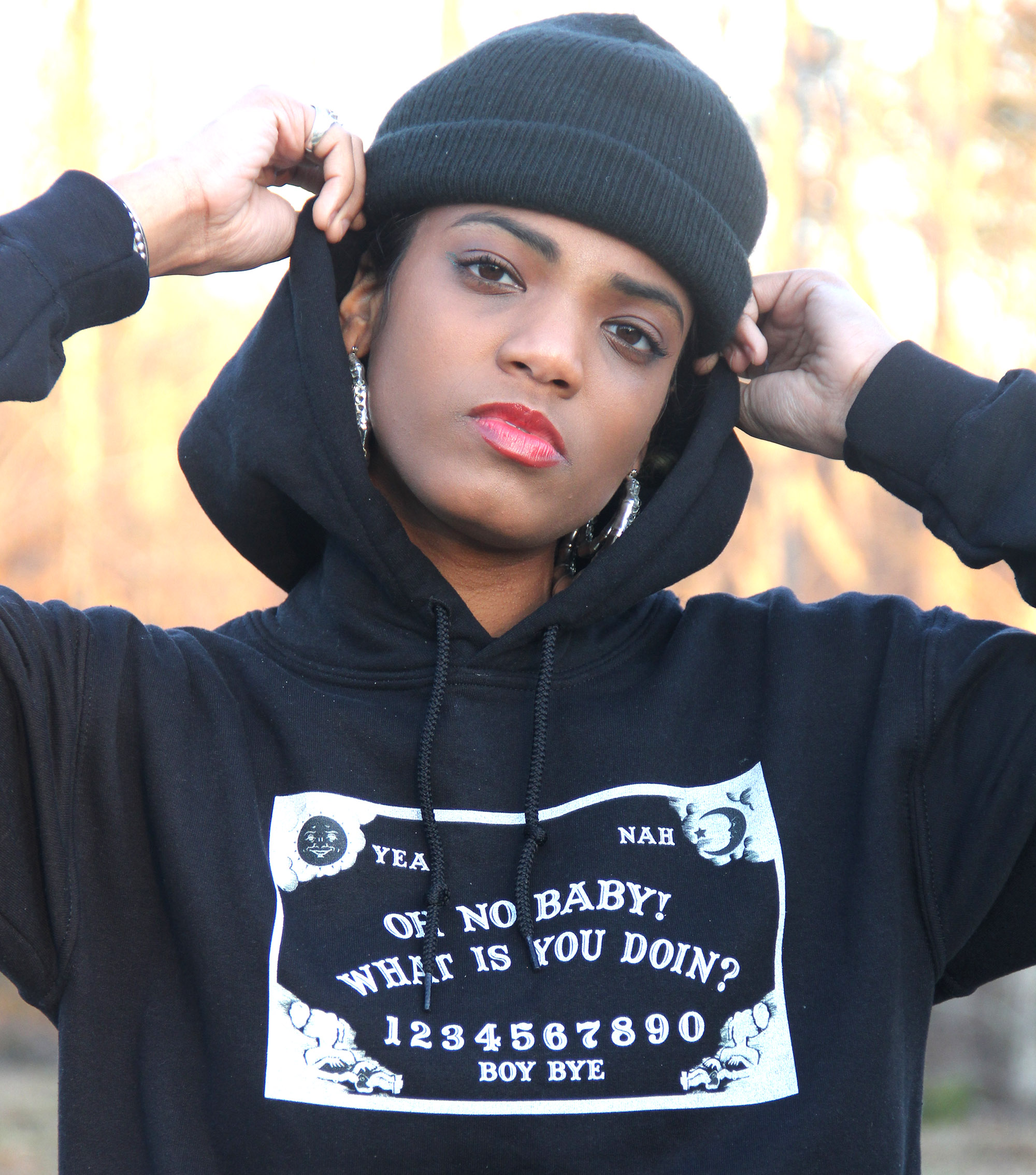 ZenSoFly is taking Durham by storm as a DJ and a performer. (Staff photo by Baleigh Johnson)

ZenSoFly is a Raleigh-based rapper, DJ, radio personality on 92.1, and producer. With her different forms of expression, ZenSoFly has many people paying attention. Her talents reach out to a variety of people and environments like festivals, club venues, and museums, but most of her performances are in Durham.

“Durham has been really supportive ever since I’ve started doing music,”  said ZenSoFly.  Like most creative people, ZenSoFly is a perfectionist when it comes to her craft. Till this day, she has many songs that are unreleased. “Little Miss Perfect” was her first project that was released.

“It was my way of forcing myself to actually put my music out. If I wouldn’t have released Little Miss Perfect, I probably may have still not been releasing music,” said ZenSoFly.  Before deciding to release her music for the first time, she approached her decision as a sink or swim moment.

“It didn’t get thousands of plays, but once people were giving me feedback and reviewing it and then it got picked up in some of the local magazines and publications, I was like okay this is really cool. I can do this. I can do music,”  said ZenSoFly.

The support that she was receiving meant a lot to her because “that was my first project that I released that was really my own. I wasn’t trying to make music to appeal to certain people. This is what I want to do.”

ZenSoFly’s passion for DJ’ing started when she decided to try it for fun.  She explained, “I was at a record store one time and interested in playing around with the DJ equipment. I ran into this group who was Watch the Duck, and they took me under their wing. I ended up opening up for them DJ’ing as I was learning to DJ.”

It makes sense that ZenSoFly does a lot of meditation every day for motivation and to be zen. For inspiration, she supports others by going to their shows. She also goes to clubs and takes in the energy and writes lyrics on her phone. Being fly also makes sense and suites her well. ZenSoFly has a noticeable and unforgettable style. Her mother is a huge influence on her style.

“She would take us to the thrift stores and we would get creative with it and try to make cool outfits out of what we could afford,” said ZenSoFly.

At the North Carolina Museum of Art in Raleigh, ZenSoFly was hired to DJ at the Ebony Fashion Fair and the fashion decade themed college night. The way she dresses and her playlist was the perfect fit for those events. Harriet Hoover, the coordinator of the teen and college Programs at the museum, found out about ZenSoFly from her performances at the Hopscotch and Moogfest festivals.

“I was really surprised to find out that she is local, super young, dynamic, an amazing producer and musician and I thought she would be a great fit,” said Hoover.

“Sunflowers” is her second project that was released. It is titled that because it represents new beginnings and growth. It is also her and her mother’s favorite flower. Her song “Getting Started” is her favorite song to perform and it is also a crowd favorite.

“It’s a song where everybody knows the words after hearing it one time,” said ZenSoFly.  A fun atmosphere, stylish outfits, a lot of flowers, and a freeing energy that makes the audience comfortable to let loose and dance to her songs is what to expect at a ZenSoFly show. Dressing up in floral is suggested before attending her shows. There is a great mixture of people in her audiences.

With the success that she has gotten so far in the Raleigh/Durham area, she believes in the future success of North Carolina. She hopes that Durham and Raleigh will someday become like an Atlanta or New York.

“There’s a goldmine here for music and for the creative and the art scene,” said ZenSoFly. A new ZenSoFly project is to be released called “Sad Face.” There is no release date for the upcoming project yet.

“Sad Face is going to be …about stuff I go through. It’s going to be pretty emotional,”  she said. ZenSoFly will be singing more of her songs on this new project.

“At the point in my life that I am right now, I want to do more of the singing. I just got a lot to sing about that’s very emo.” She has a variety of R&B songs, trap songs, and many other styles.

“Most of my music now is fun party music, but I’m a Gemini, so I have a ton of different sides,” said ZenSoFly. Keep up with ZenSoFly and check out her shows in the Raleigh/Durham area.

Listen to “Get Started” by ZenSoFly.

Baleigh Johnson is a junior mass communication major at NCCU. A Durham native, she is serving this spring as a staff writer-photographer for the Durham VOICE.