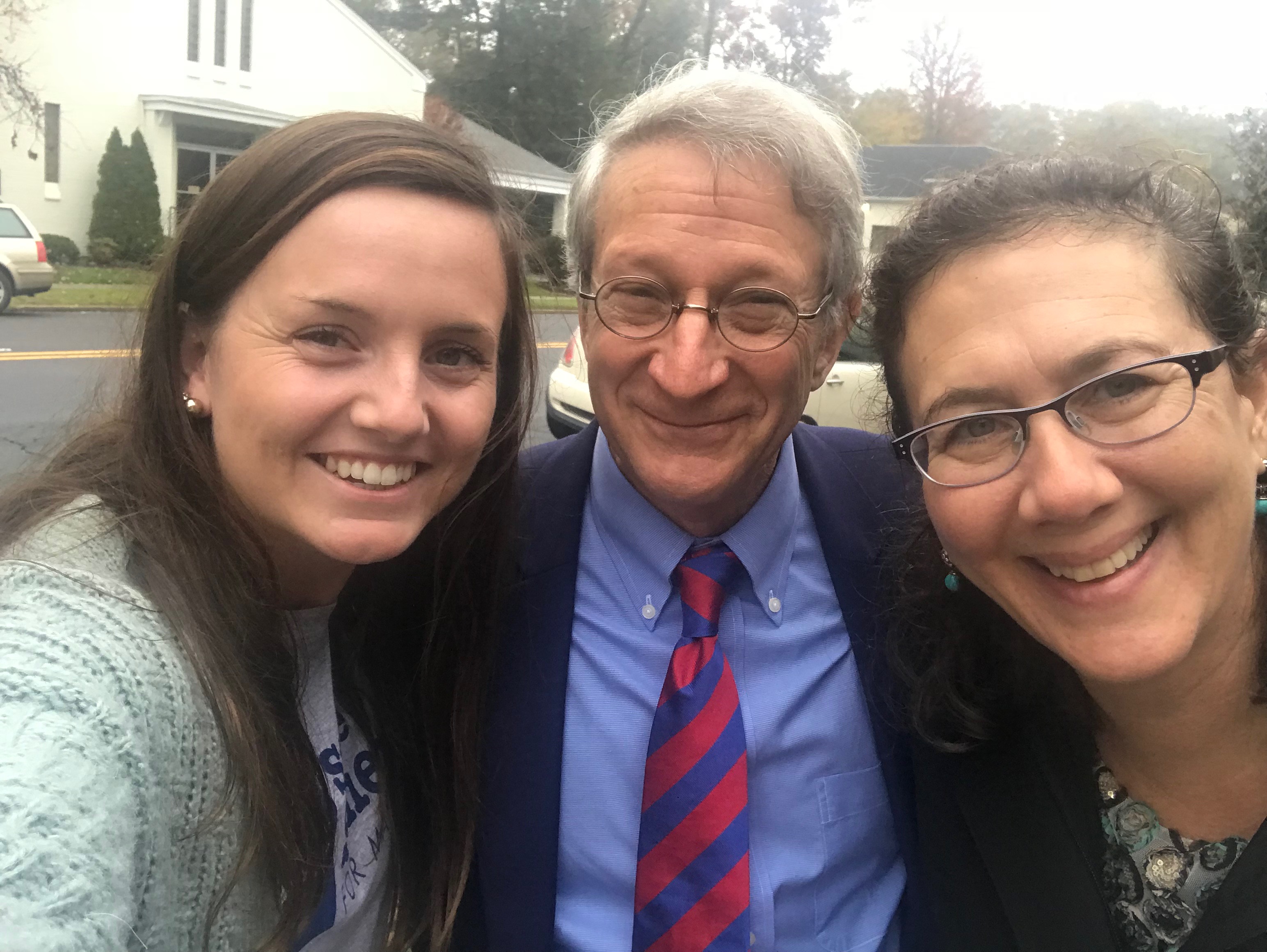 Durham Chair of County Commissioners Wendy Jacobs (right) and Mayor Steve Schewel (middle) are spearheading the new committee on Confederate symbols in Durham. They are pictured with Amy Salo (left), Schewel's campaign manager, on election day. The goal of the committee is to decide where to place the base of the fallen monument and find other Confederate symbols throughout the city. Photo courtesy of Wendy Jacobs.

After protesters toppled a Durham Confederate statue in August, the city began the process to form a commission to find out exactly what to do with both the base of the statue and the remaining Confederate symbols.

The committee, led by Wendy Jacobs, Durham County Board of Commissioners chair, and Mayor Steve Schewel, has two main goals. The first is to gain input for the disposition of the toppled statue, as well as its base that still sits outside the Durham County building at 200 E. Main Street. The second is to assess what other Confederate public symbols may be on display throughout the city.

“We want to have conversations about history and talk about difficult topics,” Jacobs said. “We want to ensure (that) people share their ideas and give their input on white supremacy and the legacy of slavery in our country, and then talk about how we move forward as a community.”

There will be designated spots for people with expertise on history for topics such as slavery, the Civil Rights Movement and Jim Crow era. Anyone from Durham County can apply, and Jacobs hopes for a diverse and representative group.

“It’s really important for us to change the narrative and confront the history of slavery, racism and white supremacy because it impacts everyone,” Jacobs said. “It holds our country back in so many ways. We need to fulfill the promise of who we are in this country, to confront our past and figure out how we’re going to address this history.”

Jacobs hopes the committee will begin work in May and present recommendations for what to do with the symbols in November 2018.

According to news media reports, Durham has been in national news regarding Confederate statues. In August, protesters toppled a monument, claiming it celebrated white supremacy. This past week, the Durham defense attorney dropped all of the charges.

Jolil Smoke, a 2017 graduate of Hillside High School, was present at a Durham rally a week after the statue was pulled down to counter-protest the Ku Klux Klan. Smoke said she believes the committee will make the right decision in what to do with the remaining Confederate symbols.

“Durham is a very cultured city, and throughout history they have been an exception to the intense racism of North Carolina,” Smoke said. “The people are participating and they’re doing what they can.”

Jacobs said she believes the events of Charlottesville, Virginia, in August 2017, where a far-right group protested the removal of a Confederate statue leading to a death, impacted many people in Durham and across North Carolina.

“Confederates were essentially people that protected the institution of slavery and, that’s what the livelihood of the South was,” UNC-Chapel Hill junior Angum Check said. “(People argue that) the Civil War was fought over states’ rights. Yes, it was fought for states’ rights to keep slaves.”

Jacobs said she saw more people in Durham become aware of Confederate symbols in the city and what they stand for.

“Before Charlottesville, people may not even have been aware of the existence of the Confederate statue in their city,” Jacobs said.

Smoke said she saw the anger and passion of the people of Durham when she protested over the summer, and had suggestions for the upcoming committee

“We shouldn’t forget what happened but we should look at it in a different light,” Smoke said. “There should be some type of plaque explaining how the outlook has evolved, and that (slavery, white supremacy and racism) is unacceptable now. Just being there in its natural state gives the wrong message. We should make the message clear about what it stands for.”