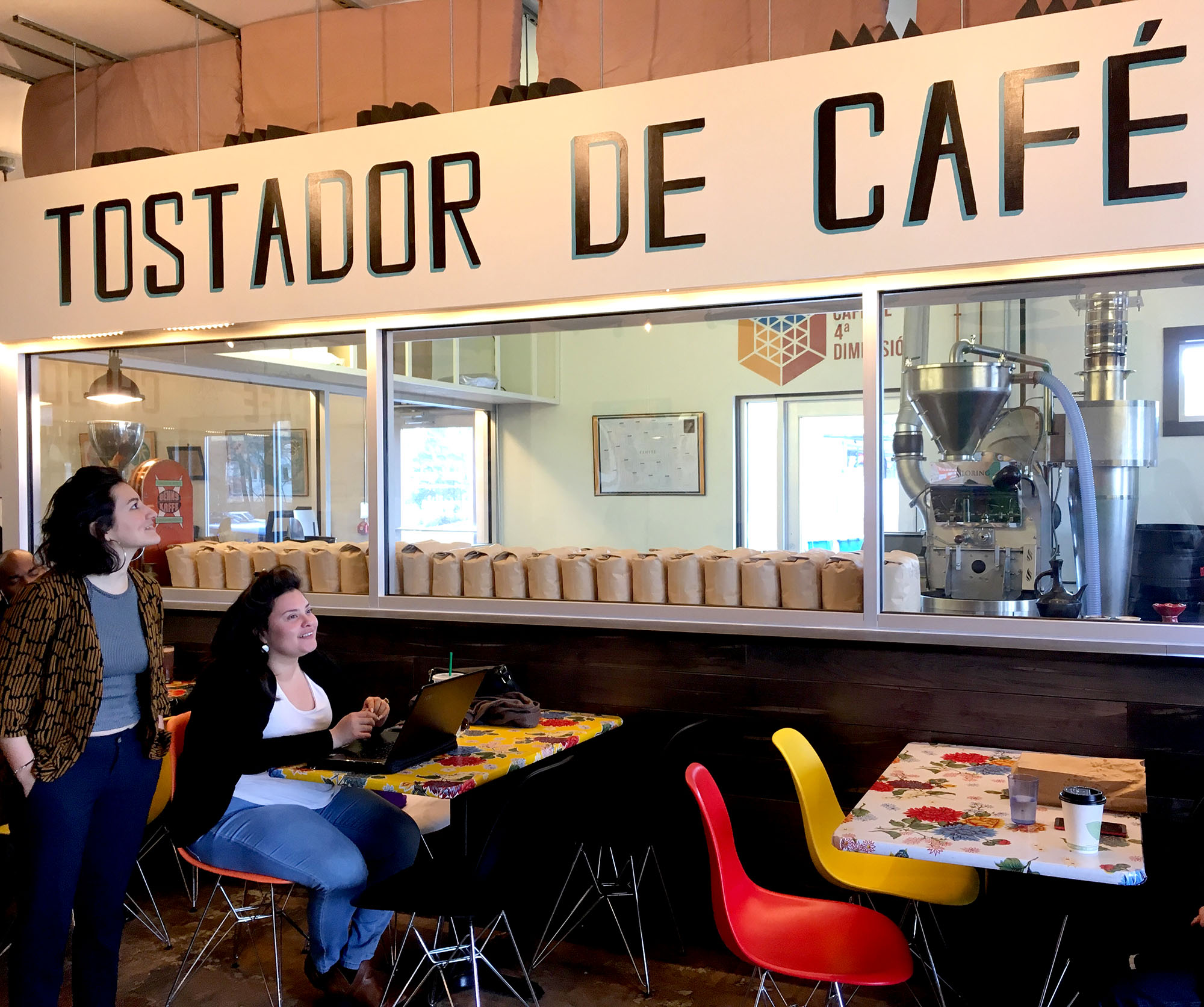 Co-owner Areli Barrera de Grodski, left, interacts with a customer in the Cocoa Cinnamon café by the window of the 4th Dimension Coffee roastery. (Staff photo by Marissa O'Neill)

Cocoa Cinnamon’s newest location in Lakewood continues the tradition of community-centered cafés with a twist: the in-house micro-roastery — 4th Dimension Coffee — and freshly made churros.

The new shop opened in August of 2017 and is located at 2013 Chapel Hill Boulevard, across the street from Lakewood Shopping Center. It is the third and final café in the Cocoa Cinnamon family, ran by spouses Leon and Areli Barrera de Grodski. The couple began roasting at night when the store would close and slowly began introducing the 4th Dimension Coffee roastery and brand to the public. Now, the roastery makes enough coffee to supply all three stores and the owners hope to supply other cafés in the future. 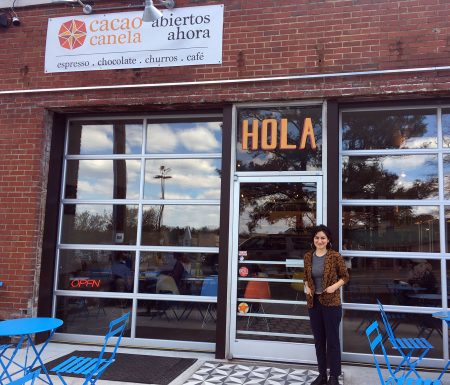 Each Cocoa Cinnamon location has its own aesthetic, its own story. They explore the cultural heritage of its founders — Areli Barrera de Grodski is Mexican and Leon Barrera de Grodski has a mixed European heritage — and the history of the spice trade, human migration and colonization. The couple opened their first café on West Geer Street in 2010.

“The first store is more about discovery and exploration and the scientific wonder of life,” said Areli Barrera de Grodski, “but it didn’t speak to my people.”

The second store’s aesthetic delves into what Leon Barrera de Grodski calls the “reverse engineer” of his wife’s DNA, exploring the history of Mexico and its colonizers.

Given Lakewood’s large Latino population, the owners wanted their final café to be a welcoming and familiar space for that community. The store’s subtle yet vibrant design was inspired by a taquería (taco restaurant) the couple visited in Guadalajara, Mexico.

“It was very simple and rustic and just felt like you were in your grandmother’s kitchen,” said Areli. “We realized that it doesn’t take a lot to make it feel like a community space.”

The front door greets customers with a bright and bold sign which reads “Hola,” inspired by hand-painted signs and flyers in Mexico and other parts of Latin America, she said. Other signs including “chocolate,” “churros” and “tostador de café” (coffee roaster) line the walls inside.

4th Dimension Coffee, located on the right side of the café, is framed with large glass windows, inviting customers to observe the roasting process while protecting the roasters from distractions during the intense process.

“It’s like a performing art. It’s this little bit of magic. It’s science,” said Areli. I think that people forget that — coffee can be scientific too.”

The roastery is just one way Cocoa Cinnamon seeks to engage its customers with the coffee process. The owners also intend to host more public coffee tastings at the café and eventually introduce coffee brewing and barista classes into the mix.

Yadira Raymond, who moved to the U.S. from Cuba in June 2017, works at Cocoa Cinnamon in Lakewood. When she first arrived she said she was nervous about learning English and adjusting to the new culture, but she quickly found a home on the Cocoa Cinnamon churro staff, which is made up entirely of Spanish speakers. She said that she has been grateful for the support she has received from the owners and their dedication to the community.

Before moving to North Carolina, Raymond worked at a hospital in Cuba for 12 years. She acknowledged that the work she is doing now is a major contrast to her previous work, but she enjoys interacting with customers and is really grateful for the opportunity and sense of community she has found at Cocoa Cinnamon.

“The process of making coffee is beautiful,” Raymond says. “Each cup of coffee has a story.”

Outside of the walls of Cocoa Cinnamon, the mission of community-building continues. Cocoa Cinnamon frequently collaborates with El Centro Hispano, located across the street in Lakewood Shopping Center, providing meeting space, support — and often churros — to the Latinx-centered nonprofit organization.

“The space is here to be used as a vessel,” said Areli.

Cocoa Cinnamon also partners with with local schools, including Lakewood Elementary School. Areli is especially passionate about providing their churros to Latino kids.

“That was such a big part of my childhood, and when we moved to the United States it was really hard to find good churros,” she said.

The name 4th Dimension Coffee taps into the different elements and perspectives that define Cocoa Cinnamon’s approach to the coffee business, according to Areli. One key factor element is the focus on “terroir,” a holistic view of the environment in which coffee is grown, from the soil nutrients to the culture of the region that allows for better understanding of the flavor notes in the coffee.

“This isn’t just a sip of coffee — it can also be that — but there is also a depth to that, which puts you down a black hole, a wormhole of possibilities and new things that you can discover,” Areli said. “4th Dimension is this idea of putting all of that information and all of these things that you don’t know and you don’t see into a cup of coffee.”