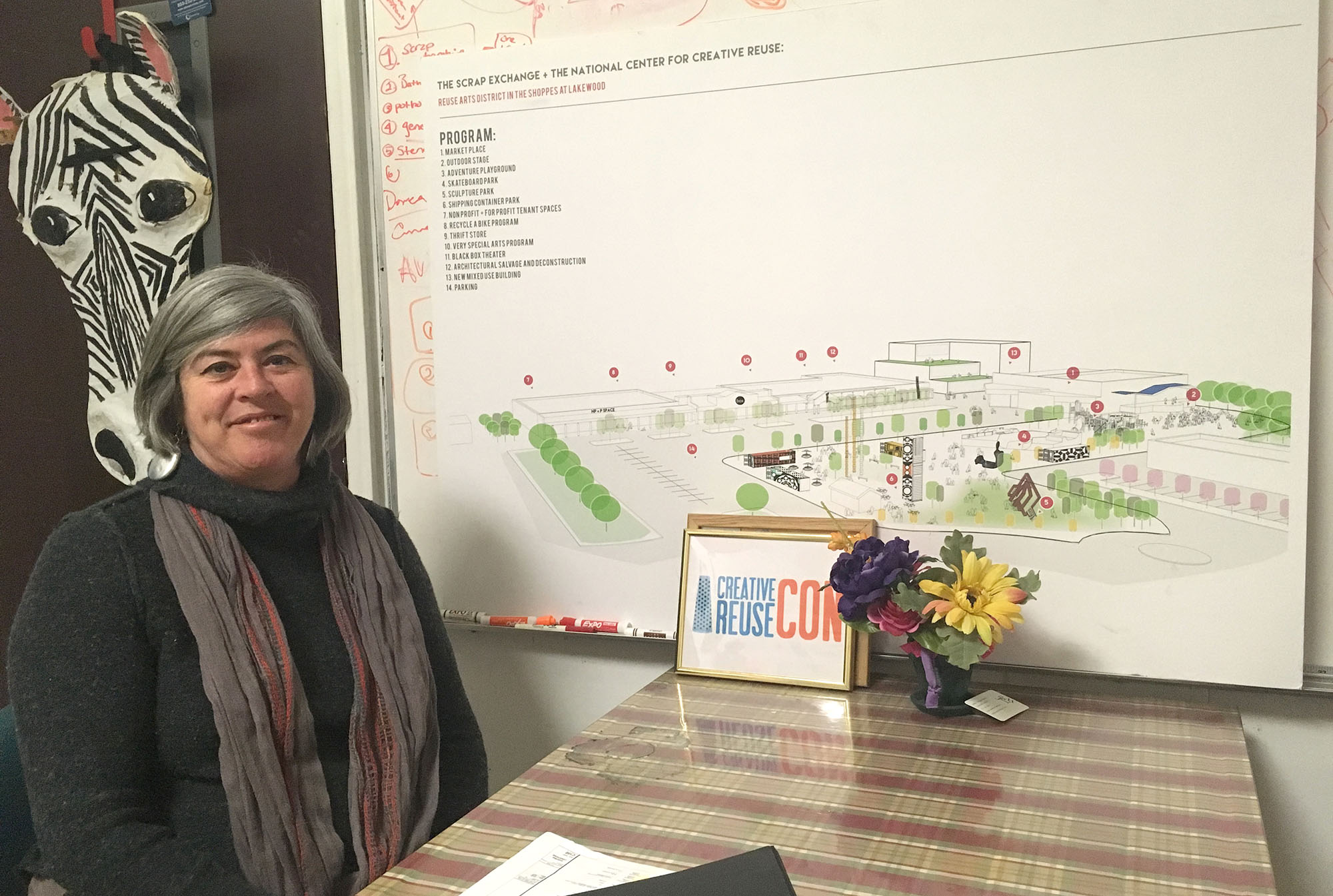 Ann Woodward, executive director at the Scrap Exchange, in her office posing with a design for the Reuse Arts District. (Staff photo by Marissa O’Neill)

On Earth Day weekend, April 20-21, the Scrap Exchange will celebrate both its 27th birthday and the grand opening of its new store, Scrap Thrift. It will also host its second DIY (Do It Yourself) Fest for the Durham community. 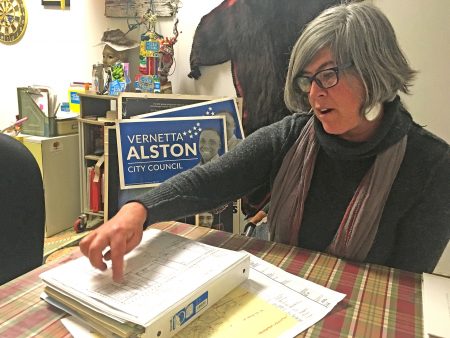 The Scrap Exchange, founded in 1991, bought its current space, a formerly abandoned church, and the deserted northern side of Lakewood Shopping Center in 2013 — totalling 12.5 acres of property. The purchase was made after lengthy discussions about the long-term sustainability of the organization, says Ann Woodward, who has been the Scrap Exchange’s executive director since 2003.

In its previous 20-plus years of operation, the Scrap Exchange leased spaces in Durham’s Northgate Mall, Liberty Warehouse and the Golden Belt, Woodward says. The nonprofit intends to transform the unoccupied strip mall into a Reuse Arts District (RAD), a hub for arts and community-centered organizations, programming, gathering and recreation.

“It’s the story of arts and culture,” Woodward says. “Artists usually go to places that are abandoned, unoccupied, cheap. Once you have artists come in occupying spaces, then you’re stabilizing the neighborhood, stabilizing the community. You have economic development opportunities, you have people coming, you have exhibitions, you have shows, you have activity.”

On Friday, April 20 at 5 p.m., Mayor Steve Schewel will kick off the grand opening celebration at the Scrap Exchange with a ribbon-cutting ceremony. Willa Brigham, an Emmy award-winning host, will be the master of ceremonies for the event, and the Bulltown Strutters, a New Orleans-style band that practices at The Scrap Exchange, will perform. The evening also includes a “friends and family” show and an artist exhibition inside the Scrap Exchange’s Cameron Gallery.

The celebration will continue on Saturday, April 21, with the nonprofit’s second DIY Fest from 10 a.m. to 6 p.m. The event will include crafts, games, live music, a free screening of the documentary, “Wasted,” an arts and environmental conservation fair and more.

“We’re working on becoming the National Center for Creative Reuse, which comes with this responsibility to be a community educator,” says Anna Graves, the Scrap Exchange’s outreach and education coordinator, a Scrap Exchange fan since childhood.

The event is designed to tie in both the innovative spirit of the Triangle and the Scrap Exchange’s mission for the RAD and education on creative reuse, Graves explained.

Woodward says that part of the inspiration for the RAD is the gentrification and affordable housing crisis spreading throughout Durham. The Scrap Exchange is challenged to rethink what a strip mall should look like, rethink what spaces for recreation and gathering can look like — all through the RAD concept.

“Our goal is to really steward RAD into this community asset,” says Woodward.

The storefront of the Scrap Exchange’s new store, Scrap Thrift, which opened in December of 2017. The grand opening will be held on April 20. (Staff photo by Marissa O’Neill)

While spearheaded by the Scrap Exchange, the RAD concept has been the result of collaboration and support from many organizations. The North Carolina Community Development Initiative, which supports community revitalization through strategic investment, smart policy and sector leadership, gave the Scrap Exchange a $2.5 million loan to purchase the spaces. Additional financing for the RAD has been supported through loans from Self Help Credit Union and Duke University Office of Regional and Community Affairs, adding up to $4.8 million in loans.

The first step in the creation of RAD is to fill the existing real estate owned by the Scrap Exchange, Woodward says.

The Scrap Exchange Creative Reuse Art Center opened its doors at its permanent location, 2050 Chapel Hill Road, in August of 2014. The 28,000-square-foot center is open seven days a week, 348 days each year, holds over 500 programs on- and off-site and defers 170 tons of waste annually, according to Woodward. Scrap Thrift, a thrift store with clothes, household items and more, opened with a soft launch in December 2017.

Many other nonprofit and for-profit organizations have already found a home in the RAD. El Centro Hispano, one of the first RAD tenants, moved to Lakewood in May 2016. Freeman’s Creative, a handcraft supply store, opened in November 2017, according to its website.

RAD Lab, a part of Splat Space, a “makerspace” and “hackerspace” in downtown Durham, and Student U, a college-access nonprofit, have been temporarily leasing space in the RAD as well. RAD Lab has signed a letter of intent with the Scrap Exchange, and Woodward says they hope to sign a lease by May 1.

El Futuro, a bilingual and bicultural mental health clinic, has signed a lease and will move in Memorial Day weekend. As for the remaining vacant sites, two letters of intent have been signed, including a music concept and the Catholic dioceses, which plans to create a food pantry.

After the commercial spaces are filled, features like an adventure playground, shipping container mall, sculpture park and more will be added, Woodward says. The Scrap Exchange started a few community gardens behind the center with a grant from Duke University’s Doing Good in the Neighborhood campaign. It intends to expand those as well.

“We’re always looking for ways to inform the community about different ways to creatively reuse materials and just be engaged in environmentalism locally,” Graves says. 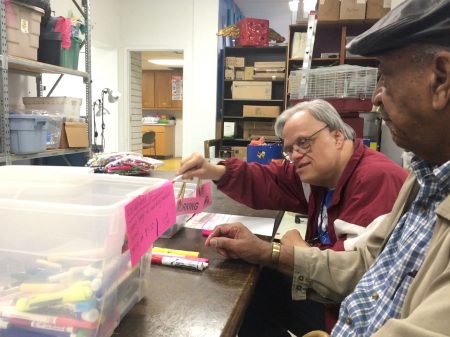 But while the development of RAD is in full swing, much is happening within the walls of the Scrap Exchange.

“I’m constantly inspired by both the people I work with and the people that come into the store,” Graves says.

Horace H. Johnson Sr., a retiree of almost 30 years, and Gary Vennhaussen, a Durham resident with Down syndrome, are an example of the inspiration blooming inside the Scrap Exchange. Johnson picks up Vennhaussen from his group home every Monday, Wednesday and Friday to volunteer at the Scrap Exchange. Vennhaussen tests donated markers, a task Johnson says helps improves Vennhaussen’s focus. He sorts them into packages, which can be bought at low prices by teachers and others.

“It is such an experience here,” Johnson says.

Johnson says he is appreciative for the opportunity the Scrap Exchange creates for people like Vennhaussen and grateful for the many supplies and programs it offers, which help spark creativity at an early age and for an affordable price.

The resulting “artwork” of the marker testing is proudly hung on Woodward’s office door, which she refers to as the Scrap Exchange’s “refrigerator.”