“How do you know when to stop?” This was the question Eric Kelly III described as the most probing question he had ever been asked about his artwork.

The 61-year-old Durham resident shared his experience as an artist in a room full of over 50 vibrant pieces from his most recent line of work. His paintings depicted ‘iconic’ people composed of bright colors and bold, curving lines, displaying layers of detail at Kelly’s Human Landscapes Abstract Art Exhibition. 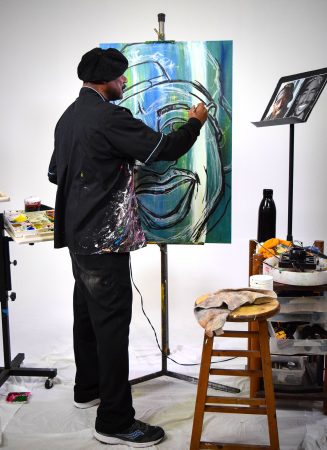 Eric Kelly III begins to paint Tupac Shakur in front of a live audience at the Human Landscapes exhibition. (Photo by Liz Chen)

The art show took place at Playground Studios Gallery at 1500 E. Club Blvd., on Saturday, April 7, 2018, from 10 a.m. to 5 p.m., and was organized by the Free Things in Life Music and Art Festival. The event showcased Kelly’s newest pieces, while he completed the final installation of the series—a portrait of the late rapper Tupac Shakur—live in front of the attendees’ eyes.

When asked how he began his artistic journey, Kelly described his Grandmother’s attempts to keep him calm in church as a young boy, by giving him a pencil and paper.

Kelly detailed how after discovering his love for art, he found himself inspired to become an art teacher. He graduated from North Carolina Central University. Concerned about the financial stability of an artist, Kelly pursued advertising, all while continuing to work on art. However, his passion for teaching others about art never ceased. He currently mentors a number of young people, and many of them attended his most recent exhibit.

Free Things in Life Music and Art Festival Director, N’gamet Keita, who doubles as one of Kelly’s assistants, described how she met Kelly. She recounted that he approached her in a FedEx store while she was making copies of festival flyers, and began asking her questions about the event and her creative involvement in the community.

“I wasn’t really looking for a mentor,” Keita said, “but I saw that I thought he could be that for me, in regards to helping me with the things that I was preparing for. And now we’re here.”

Keita went on to elaborate on how she values Kelly’s creative honesty with her as her mentor.

“He wants you to know your work is good, but there’s also certain things that you could improve on as well,” Keita said. “And that’s what I really like about our relationship. We’re really honest with each other, and I appreciate that, because that’s really all I ask for. You don’t go to someone for critique if they’re not going to give you the truthful answer.” 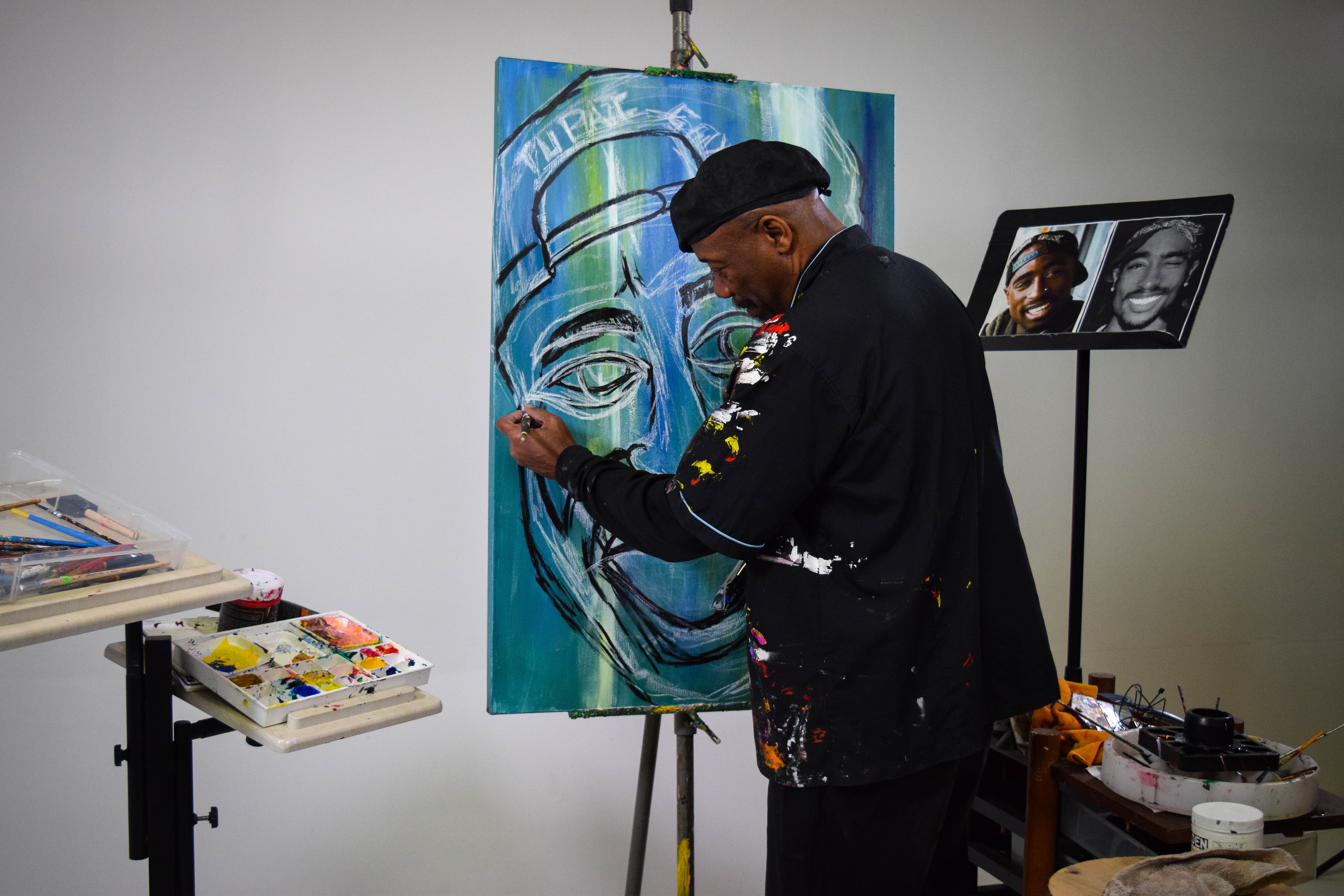 Eric Kelly III noted Tupac Shakur as “one of the most influential rappers” of his time. (Photo by Liz Chen)

Tarik Hashim Harley, another assistant and documentarian for Kelly, described being enamored with Kelly’s work when they first met.

“I haven’t seen anything like this before, so it kind of sticks out to me,” Harley said. “I’m like a big kid, and I’m sure these are pieces that children would really look at. They’re kind of like realism and expressionism—expression through realism.”

Kelly’s expressionist style reproduced many familiar faces in the collection, including Michelle Obama, Oprah Winfrey, Richard Pryor and Lupita Nyong’o. The collection also included portraits of people in Kelly’s life that he feels strongly about.

“Each person that’s in the show is somebody who’s iconic,” Kelly said. “And when I say iconic, I’m saying that a person, just anybody, is an iconic person when you sit down and talk to them.”

He went on to describe the ways in which he has captured individuals’ auras through his use of lines in his Human Landscapes exhibition.

“The lines are different ideas and different elements of how that person feels—that’s a landscape,” Kelly said. “You know, when you look at somebody’s face, and you really look at the lines that are in their face, it’s the journey that they’ve been on all of their life to create their lines in their faces, and the lines gives us a landscape of really who they are.”

Following Kelly’s live demonstration of his painting of Tupac, he began a question and answer session for the audience. During this time, “What You’re Looking for Is Looking for You,” a one-hour-long song of his own creation, played softly in the background. He eventually reached his answer to the question of when to stop:

For more information about Eric Kelly III and his work visit his website, www.erickellyiii.com.

For a printer-friendly version of this story, click here

Liz Chen is a junior reporting and English major at the UNC-CH School of Media and Journalism. A Madison, Wisc., native, she is a staff writer-photographer for the Durham VOICE.

Tessa Platek is a senior political science and communications major at UNC-CH. A Greensboro, N.C., native, she is the multimedia coordinator for the Durham VOICE.