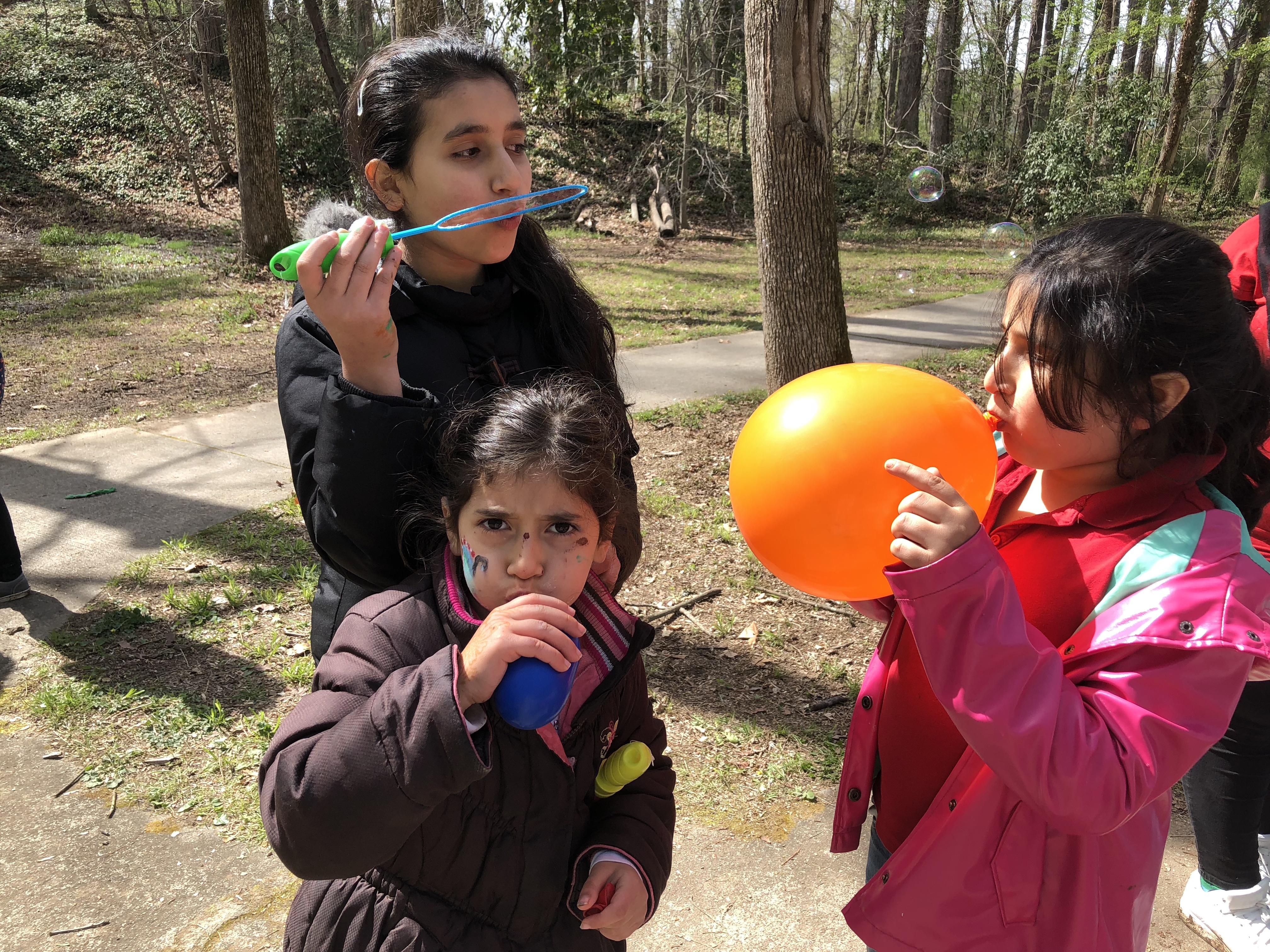 Sedra Khatib (back), Alma Khatib (front left) and Tala Khatib (front right) blow bubbles and balloons at the annual Community Field Day at Rockwood Park in Durham. They are three of nine siblings, who are Syrian refugees resettled in Durham. (Staff photo by Ramishah Maruf)

Sixth-grader Sedra Khatib cried on her first day at Lakewood Elementary School in Durham a year ago.

“[The school] didn’t have a bus to go to home. And they asked me and I didn’t understand,” Sedra said. “They called my dad, and he said he will come. They had to use [Google Translate]. I was crying.” 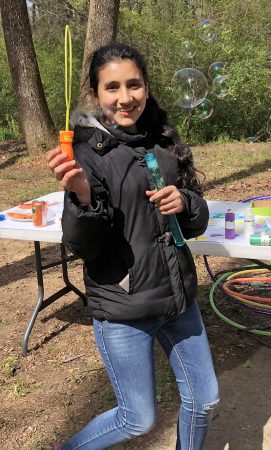 At the time, Sedra barely spoke English. Sedra, along with her parents and eight siblings, arrived in Durham as refugees 1 1/2 years ago. Before their resettlement, the Syrian family lived in Jordan for four years.

But on Saturday, Sedra was talking about the friends she made at Sherwood Githens Middle School in nearly perfect English. She and other refugee families gathered at Rockwood Park near the Forest Hills neighborhood in Durham for the annual Community Field Day, hosted by the Zakat Foundation of America and the UNC-Chapel Hill Muslim Students Association.

“For the families, this an escape from the daily grind,” said Rizk Alghorazi, UNC junior and UNC MSA community outreach chair. “The parents are always at work and the kids are at school. [The field day] is a different environment where the tutors can hang out in a setting where they don’t have to work.”

The field day featured a bounce house and stations for temporary henna tattoos and face painting. Mothers chatted with each other as children painted in the art studio and ate cotton candy.

According to the News & Observer, 2,475 refugees arrived in North Carolina in 2015, and ABC11 reported that North Carolina had the ninth-highest amount of Syrian refugees in the United States in 2016.

When the Khatib family arrived in 2016, they were resettled in Durham. Their nine children, whose ages range from 5 to 23, were enrolled in Durham Public Schools.

From the beginning, Sedra and her 13-year-old sister, Sana, said Durham was different from their school in Jordan.

Sana said “juice” in a heavy accent, and Sedra whipped her head around and laughed.

“Shoes? You want to buy shoes at school?” asked Sedra.

They both dissolved into giggles.

Alghorazi said the language barrier is only the first obstacle new refugees have to face when arriving in America.

“Once you learn the language you have to learn the culture as well,” said Alghorazi.

When Sana first began school in Durham, she said many people made fun of her for not knowing English. However, Sana said she has more friends at school now, many of whom are also from the Middle East.

“We miss Jordan sometimes,” Sedra said. “We had a lot of friends there, but middle school is better now because we made more [friends].”

The Khatib sisters enjoy their life in Durham. Although Sana said she misses the food in Jordan, she found a restaurant in Durham that she loves.

Sedra appears to be a budding photographer. She pointed to a wall with a Dr. Seuss quote, noting it would be a good backdrop for pictures. She directed to where her younger sister should stand for a picture, and blew bubbles into the frame of the shot.

“I thought it would make the picture prettier,” Sedra said sheepishly.

Most of the refugee families UNC MSA volunteers with live in Durham. Alghorazi said the program has grown since last year, and now students are going “every day of the week.”

“Refugees don’t have family outside of their nuclear family,” Alghorazi said. “It’s hard for them to adjust. I guess that they need to know that there are people who actually care about them, and that there’s someone they can contact if they need help.”