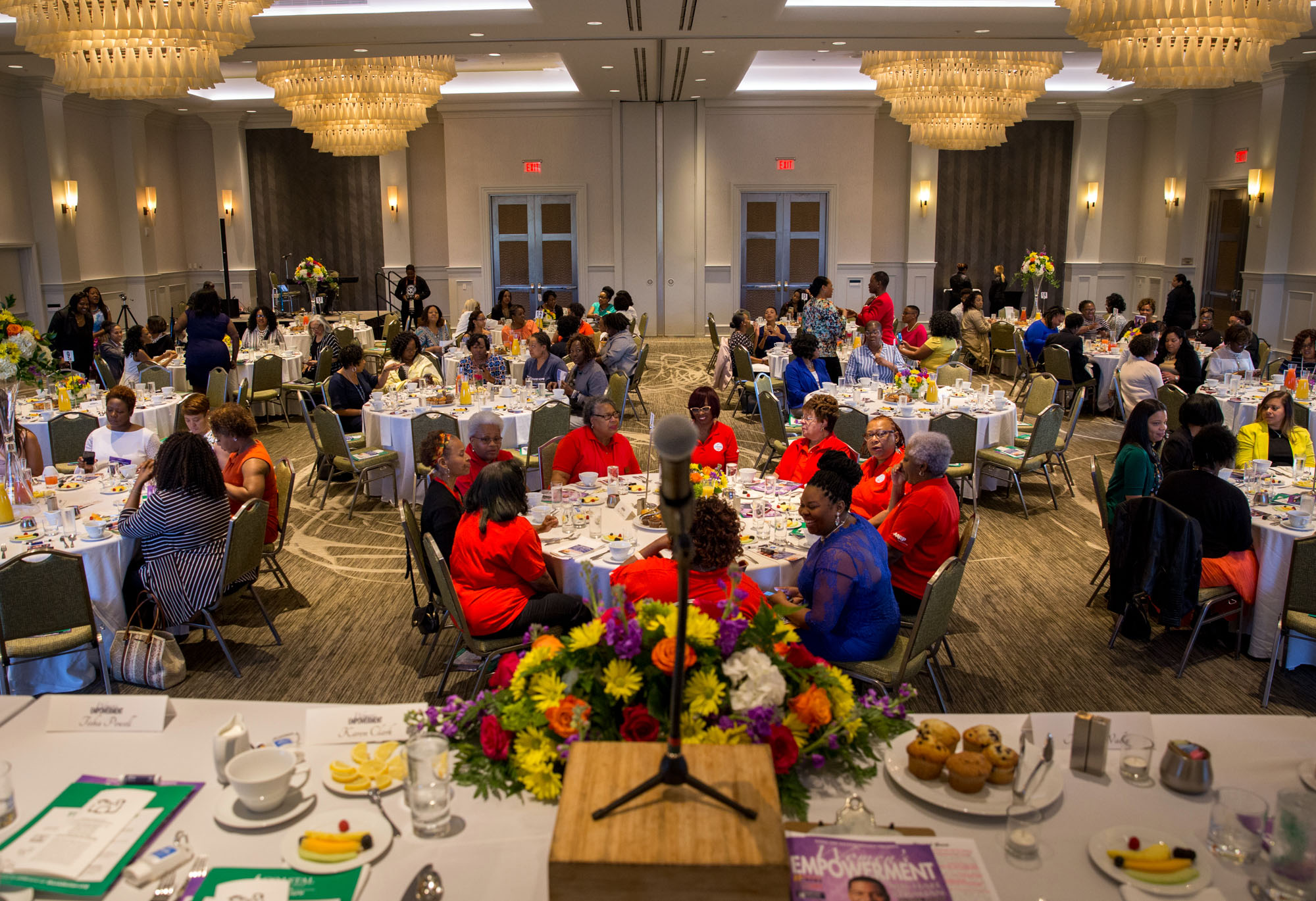 Nearly 100 guests, including Radio One Raleigh sponsors, filled the ballroom for the morning’s VIP breakfast before the Women’s Empowerment expo at the PNC Arena in Raleigh. (Staff photo by Tenley Garrett)

Hard work deserves recognition. But more than that, it deserves celebration. This year’s Women’s Empowerment VIP breakfast held at the Raleigh Renaissance Hotel on Saturday, April 14, provided the perfect platform for such festivities. 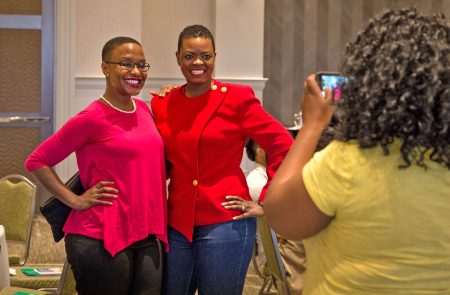 As attendees trickle into the Raleigh Renaissance Hotel ballroom, two friends pose for a photo before the breakfast begins. (Staff photo by Tenley Garrett)

The breakfast was set to begin at 8 a.m. in the Renaissance Hotel’s ballroom. The room was reserved exclusively for this special breakfast honoring both Radio One’s sponsors and Raleigh’s accomplished women of color who have become the centerpieces of successful business and nonprofit endeavors throughout the Triangle. Originally founded in 1994 in honor of Women’s History Month (according to Radio One’s website), Women’s Empowerment has since become an expo to inspire, encourage and educate attendees and facilitate a deeper sense of community. But the VIP breakfast that preceded this year’s expo gave women an opportunity to put aside formalities and start the day on a high note

Kristi Hampton, who owns Le Petit Paris Limousine Service in Roanoke Rapids, N.C., was one of the women eager to dive into a day full of camaraderie, affirmation and celebration. She’d attended Women’s Empowerment six or seven years in a row, but this was the first time she attended the breakfast.

“This is my getaway,” Hampton said through warm laughter. “Everybody speaks to each other, we get along, we walk. It’s a day to relax, enjoy and just be free… It’s a time for fellowship— it’s wonderful,” she said.

The Women’s Empowerment breakfast provided many women an environment where they could reconnect with old friends, too. Gloria Davis, a friend of Hampton’s and CEO of a substance abuse agency in Rocky Mount, N.C. has attended the expo since its inception.

“It has really been a truly wonderful experience,” said Davis. “Because each year we not only get together with our core group of women and hang together, but when we come out we meet other people, we network and just learn a lot of things from events that they have at the center,” she said.

As for the breakfast, like Hampton, this was her first.

“I am so excited about [the breakfast], I couldn’t hardly sleep last night!” said Davis.

She wasn’t the only one there reeling with excitement. 15-year-old Caylah Milton, a 9th grader at North Raleigh Christian Academy, was especially enthusiastic about the featured speaker, Angela Rye. Caylah has long been a fan of the CNN commentator and NPR political analyst— who’s made appearances on channels like BET, NBC, HBO and MSNBC as well— and now, she was about to have breakfast across the room from her.

“I’m very nervous,” Caylah said. Despite her nerves, though, Caylah knew what she would say to Rye if given the chance.

“Thank you for encouraging other young black girls to do what they like to do and to not be afraid of what other people say,” Caylah rehearsed. 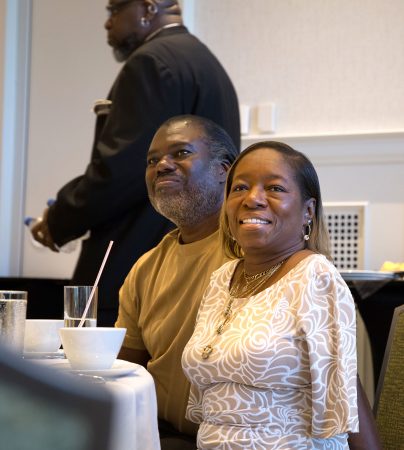 Tawana Williams and her husband, Keither ‘Toby’ look to Angela Rye as she praises Williams’ hard work and determination to overcome the trauma of her past. (Staff photo by Tenley Garrett)

Before Rye was invited to the microphone to address the room of nearly 100 attendees, Tawana Williams, a motivational speaker and bestselling author of UNarmed But Dangerous shared her story. In the past, Williams was gang raped, raped by her step father, addicted to crack and cocaine for a decade and temporarily debilitated by a stroke and mild heart attack. And her book’s title takes on a literal meaning, as she was born without arms due to substances her mother had taken while pregnant with her. But her condition hasn’t deterred her.

“Nothing missing, nothing broken,” Williams declared boldly before the room full of women. “My mother once told me, ‘You must not have needed arms, ‘cause God didn’t give them to you,’” she said.

Her main message to the audience was that her faith had given her new purpose and had helped her turn her life around.

She and her husband, Keither ‘Toby’, toured the country for nearly a decade educating and delivering motivational messages to youth, pro bono.

Following Williams’ inspirational speech was the anticipated Angela Rye, who was so deeply moved by Williams’ words and experience that she invited the guests to dig in their pockets and donate what they could to Williams’ nonprofit, Tawana Williams Outreach, Inc., as well as to her upcoming film based on UNarmed But Dangerous. Rye passed a bowl around the room to collect donations. It came back to Williams overflowing. 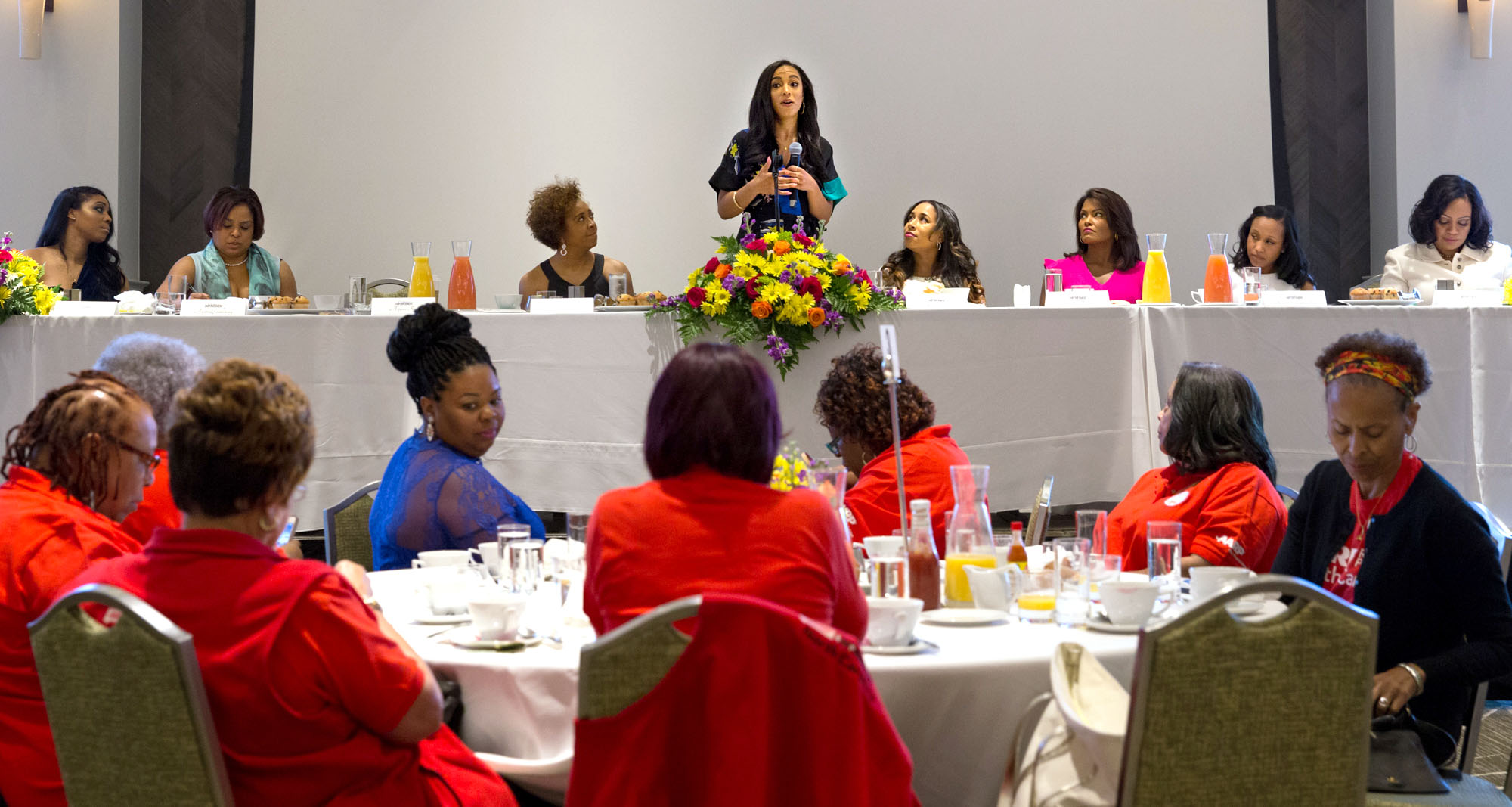 “Tawana said something that struck a chord with me,” Rye said: “And it actually made me mad. And that is that Tawana went around the country, pouring out her soul, using her God-given gifts and talents… But she went around this country for nine years for free. And as a black woman in this country in this day and age, where black people are still not paid their worth… We have poured into people who then take our ideas and profit from them. And we’re just not going do that to our sister [Tawana] in something called Women’s Empowerment, are we?” 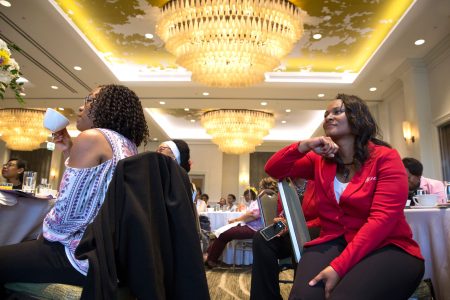 Audience members listen intently as Rye comments on the state of the female African-American population in the U.S. today: “Black women are the highest growing group of entrepreneurs in this country, and that’s something to be proud of. We’ve got work we need to do, and there’s nobody I would rather labor with than black women,” said Rye. (Staff photo by Tenley Garrett)

Rye then went on to say that the African-American population in the U.S. has a collective buying power of $1.3 trillion. But, she said, failure to invest and a tendency to over-consume has left this population largely disadvantaged. When she passed the bowl around she emphasized this point.

“This is not a charity gift, this is a vesting into Tawana because we know this is bigger than [her] movie, we know that it’s bigger than everything she’s already set out to do… This is just saying ‘Sister, we believe in you,’” Rye continued. She then expressed exactly what empowerment looked like in her eyes:

“What I’ve learned about being on the road speaking this year is there’s an important definition that Dr. King gave us about power,” she said. “He defined power as the ability to achieve purpose. And I think when we take it a step further and figure out what it means to equip someone else, to help them understand what it means for them to achieve their own purpose… That is what real empowerment looks like.” 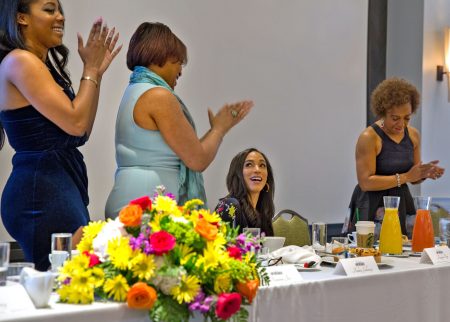 Fellow speakers as well as the entire audience gave a standing ovation to Rye after her concluding remarks and call to action. (Staff photo by Tenley Garrett)

She then implored the women in the room to, above all, rally together: “Black women are the highest growing group of entrepreneurs in this country, and that’s something to be proud of. We’ve got work we need to do, and there’s nobody I would rather labor with than black women. We get it done; we’ve been getting it done. We get it done even when we don’t get the credit,” she said.

Finally, concluding her speech, Rye left the audience with a call to action:

“It’s all about applying your faith into tangible actions. Here in this room, ladies, all day long you’re going to be around some of the most powerful black women in this state. How are you using your power to change and shape our politics? How are you using it to change our economics?” she asked earnestly.

The takeaway from this year’s Women’s Empowerment? Don’t just celebrate the hardworking women in your community— invest in them.

To support Tawana Williams’ nonprofit or learn more about her message, click here.

Tenley Garrett is a junior photojournalism major at the UNC-CH School of Media and Journalism. An Asheville, N.C., native, she is serving as co-editor and photo editor of the Durham VOICE.