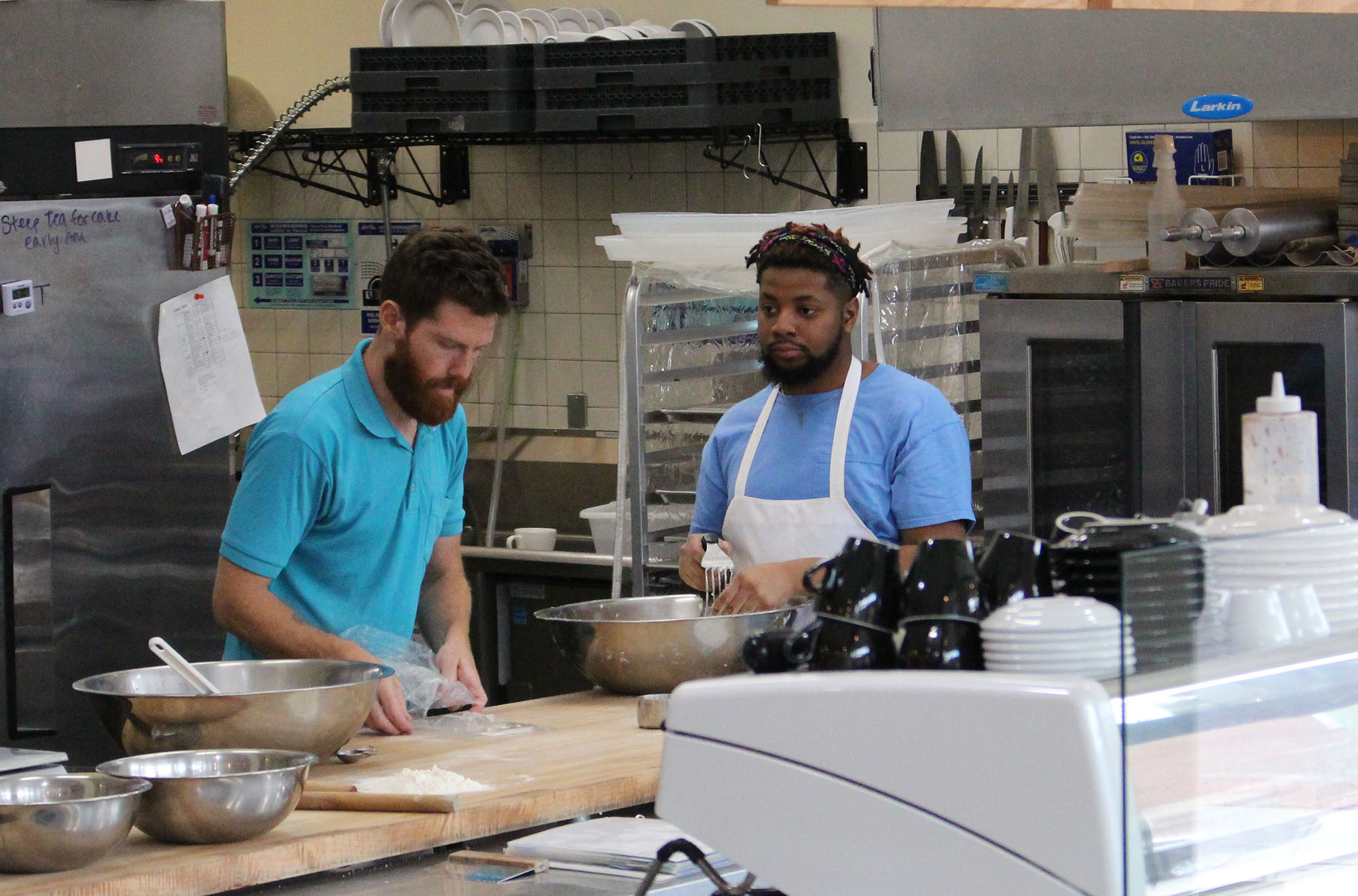 A modern revival is slowly underway for historic Old East Durham. But one thing has remained constant for this neighborhood, small businesses. For  local owners,  Ali Rudel and Ben Filippo, running East Durham Bake Shop has been a  labor of love.

At the intersection of South Driver Street and Angier Avenue, lies the East Durham Bake Shop. Opened earlier this year, in March, the shop has become a neighborhood place of  indulgence. The married couple, Filippo and Rudel, offer scratch-made foods made with local ingredients from nearby farms.

“For my wife, Ali, it’s always been her vision in creating high-quality baked good, and being involved in that process,” said Filippo.  This East Durham gem was a dream for Rudel, but hard work and Filippo’s support made it a reality.

When customers walk in, they are met with warm smiles from the open-kitchen staff. Smells of buttery pastries and pies circulate the air, as customers take their picks from the  hand-scribed chalk menu. Nearby the entrance, some sit at the window engulfed in conversation.  Others opt for the long dining room like table as they complete work. Covered in flour, Filippo rolls out dough to prepare ham croissants.

“I always feel welcomed in this space. It’s became a ritual spot for the writing that we do,” said Duke graduate student Chance Gregory.  “The food has been delightful, and I really enjoy the cookies. I walk into this space and feel comfortable,” said John Stadler, another graduate student.

For parents of two, running a bake shop becomes tedious, but positive reactions from customers make it worthwhile. Owned by Rudel and co-owned by Filippo, the shop’s work is shared equally between the two.  Filippo describes their hands-on business roles as “owner-operators.”  “I’m here every single day, and she’s here at night on the business side of things,” said Filippo.

Prior to setting roots  in the Triangle, both had called Brooklyn their home.  After Rudel left Brooklyn’s Pratt Institute, she attended the College of William & Mary in Virginia, according to a story in Indy Week. With a linguistics degree, Rudel returned to Brooklyn for a barista gig at sister-owned bakeshop, Four and Twenty Blackbirds.

It was here, when she discovered a passion for baking. Pies became her specialty, while soaking up knowledge from  Four and Twenty Blackbirds owners, Emily and Melissa Elsen.  Rudel’s skills improved as did her creativity, forming pies with unique flavors. Her one-of-kind palette earned a spot in the Elsens’ best-selling cookbook, ‘The Four & Twenty Blackbirds Pie Book.’

Though Fillipo learned baking from Rudel, the co-owner was familiar with the food industry. Before meeting Rudel, Filippo studied global history and food studies at Tufts University. Later, Filippo began working and teaching  cooking classes for kids at the New York based organization Better Beans.  The organization prioritized access to fresh and organic foods for school children.

After Rudel and Filippo married, they wanted to grow a family in an affordable location. “More than anything, we just felt comfortable here,” said Filippo. In 2011, the couple moved to the Triangle area, first living in Chapel Hill. Rudel began a managing position in Chapel Hill, with Filippo managing the South Durham Farmers Market.

Of course, transitioning from Brooklyn to a more quiet city was an adjustment. But, a doctor visit altered their lives when Rudel discovered a nodule on her thyroid. During recovery, according to reporting by Indy Week, Rudel began focusing on baking, and Filippo ran a homemade jam subscription service This & That Jam.

Finally in 2015, the  East Durham Pie Company began as a  one-person operation, but Filippo soon joined. The company delivered and sold  pies to shops around the Durham and Triangle areas. Bull city hotspots, such as  Cocoa Cinnamon and Funny Girl Farms, sold the baked treats.

After three years of working pop-up shops, the owners launched a kickstarter campaign for an actual shop in July 2016. Within a month, over $24,ooo was raised but another obstacle laid ahead.

Hiccups during a year-long renovation delayed their grand opening. “We thought we were going to open way earlier the we did,” said Filippo. Instead, the couple found creative ways to maintain interest around the neighborhood. “There was no electricity (in the building), so we’re standing out there with big balloons as we hand out cookies,” said Filippo.

Soon, the old building was transformed  into a cozy neighborhood hang-out. In the shop’s six months of operation, it’s clientele has not ceased. In order to focus on the bakery, reported by the Herald Sun, Filippo stepped down as executive director of Preservation Durham. While there, Filippo helped launch the Preservation Equity Project. The program provided assistance for low-interest loans to residents living in older homes. The project helped many working class and minority families keep their homes.  However, the couples work within the community had now shifted into their bakery.

The owners’ food industry experience has impacted how their employees are treated. “Being a new business and starting off with a liveable wage, that’s a big challenge, but it’s a challenge that we welcomed,” said Filippo. As part of the Durham Living Wage Project, a local initiative urging employers to pay workers a living wage, the bakery commits to  providing fair pay.  The bake shop employees are involved in every aspect, and cross-trained in a multitude of tasks.

For the owners, limiting all food waste and trash to one bag per week  is a must.  Filippo has worked with homeless populations in faith-based communities, often donating bakery leftovers to a local church. Local company Compost Now, picks up their waste twice a week. The shop finds different ways to reuse items such as leftover croissants for bread puddings or making soup using excess produce.

Also, finding ways to go green is another value for the eatery. The shop only uses metal containers such as the soap dispensers. All soap products are from Durham-based sustainable soap company Fillaree.

The owners have maintain their commitment to useing local suppliers. They continue to buy from local farmers from around the area. Suppliers such as Eastern Carolina Organics and Farmers Food Share have maintained business with them.

“We like to work with those guys because they do stuff outside of buying and selling food,” said Filippo. Not only does Farmers Food Share operate from downtown Durham’s Bull City food hub, but works with pre-k programs to aid food shortages in the community.

Yet, their love for local customers and serving as a welcome place for locals is undeniable. A wall, entitled ‘Just Because,’ is filled with handwritten note cards with messages of support and  offers to buy the next customer’s treat.

The idea embodies the owners importance of giving back, and  Filippo’s Italian roots. Filippo explained how customers would leave change on the counter for the next customer’s espresso. Aside from running a successful business, the owners main goal is to positively impact their working class neighborhood one treat at a time.

“Everyone is in need of something homemade, and made of love,” said Filippo.

Deja Finch of Oxford is a senior public relations major at N.C. Central University. This fall she is serving as a writer-photographer for the Durham VOICE