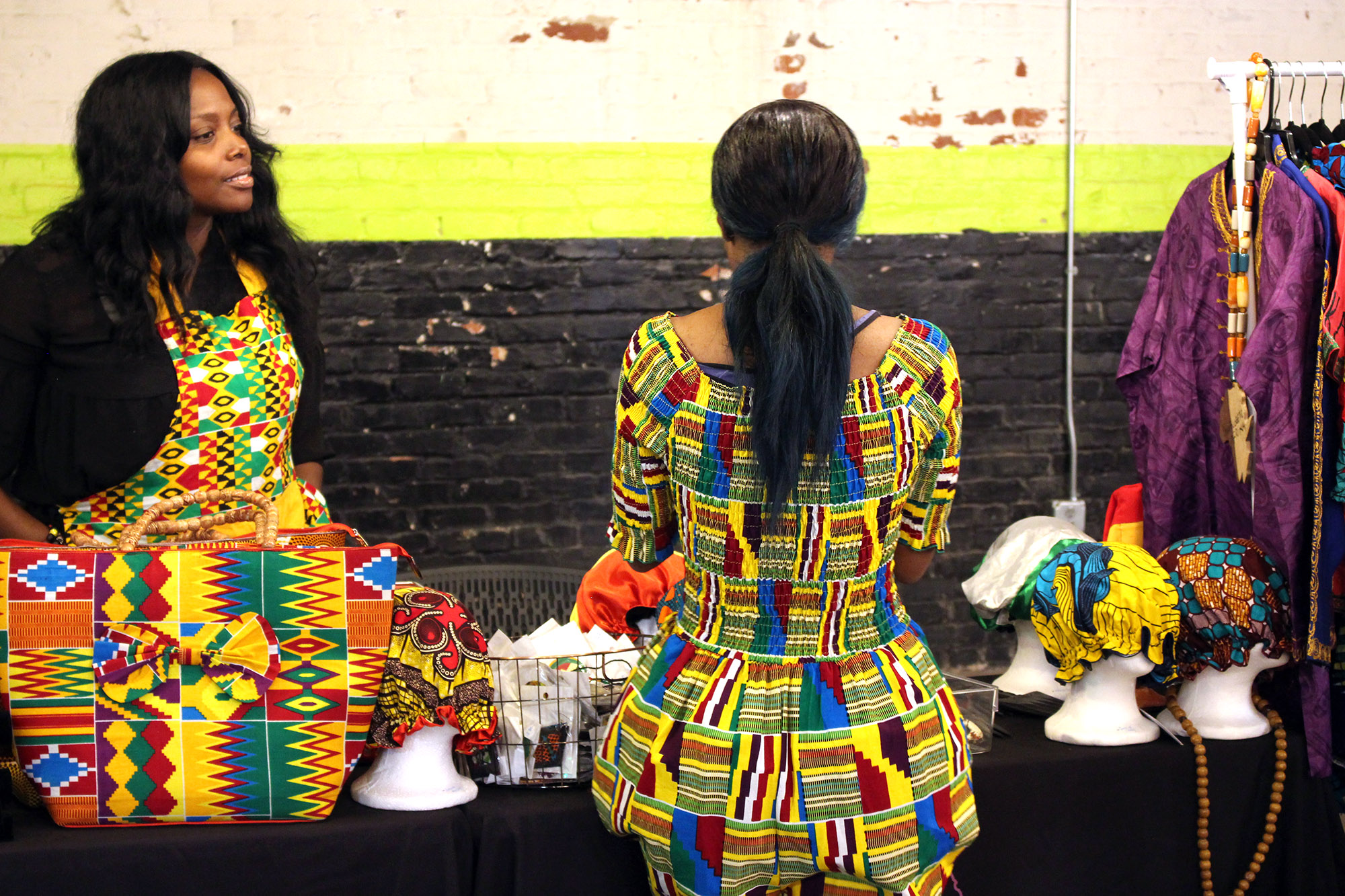 Nana Aku Opata (left) and daughter Halima Elbert, set up the booth for I Feel Soo African fashion at the African Fashion Week N.C., held Sept. 8 at the Fruit in Durham. (Staff by Arielle Cummings) 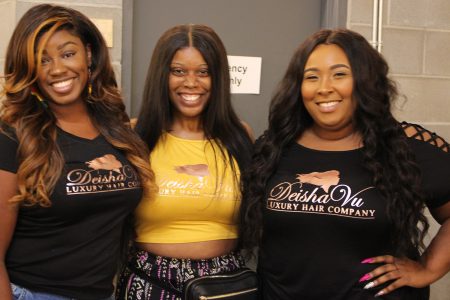 On Sept. 8 at The Fruit, 305 S Dillard St. the African Fashion Week NC (AFWNC) hosted the Afro Marketplace. The event allowed vendors to come and sell their products, from jewelry, to bonnets, to the people of Durham.

The event was just one of four that happened throughout the week. On Sept. 6 , the AFWNC had an AfroBeat Fit Dance class held at the Triangle Dance Studio, on Miami boulevard. On Sept. 7  they hosted The Art of Fashion Networking Mixer at The Fruit.

Then on Saturday, was the Afro Marketplace, which was the lead up to the Official African Fashion Week 2018 Fashion Show, also held at The Fruit.

When the event started and already The Fruit was filled with a hand full of vendors and customers, all ready to sell and buy the variety of merchandise available.

The Fruit, which is a restored warehouse, once housed giant coolers for fruits and veggies arriving by train. Today the warehouse is dedicated to making and experiencing visual and performing arts that include film, dance, painting, photography, and drama. 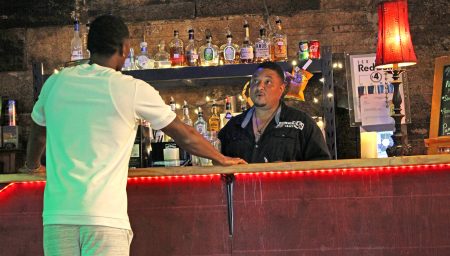 Roman Gabriel, creator of Romanztea, serving up some of his sweet tea at the AFWNC Afro Marketplace. (Staff photo by Arielle Cummings)

The AFWNC was founded in August 2016, the goal is to help promote the advancement of African inspired fashion products in North Carolina.

One of the AFWNC’s greatest desire is to support the growth and evolution of African inspired fashion. AFWNC seeks out people with new startups in North Carolina, and help them with achieving the success they are looking for.

AFWNC, believe in the idea of growth through collaboration, partnership, and unity. That is one of the reasons why they reach out to anybody, regardless of race, religion, and culture. AFWNC is not just about fashion, they also teach and help African cultures to flourish. 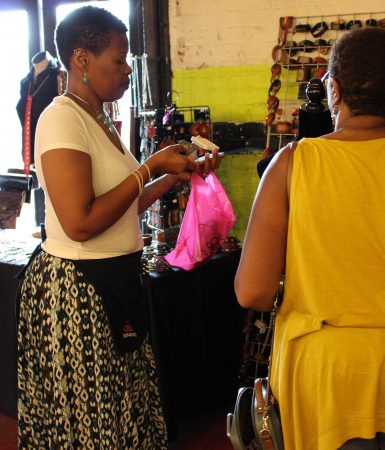 Although the African culture move is  large in the U.S., AFWNC believes that many African designers are having difficulty entering the market because of certain challenges. AFWNC, which is a fairly new organization, is very humble. They welcome any ideas and input that are useful towards the success of their goal to help other vendors.

The African fashion industry is growing and evolving, some of the vendors that where at the event were Deisha Vu Luxury, independent consultant Kaamilya Williams from Paparazzi, I Feel Sooo African, Chesca Designs International and Romanztea. Although Roman Gabriel, the owner and operator of Romanztea, wasn’t at the AfroMarket to sell African apparel or jewelry. Gabriel did serve up some of he’s sweet, sweet tasting tea, that he says is mad with love and grandma hugs.

“Yup, I put a couple of grandma hugs in there,” said Gabriel.

Deisha Vu Luxury Hair Company, a startup business, offers virgin hair extensions from all different origins, for versatile long lasting hairstyles. What sets them apart from other hair extension brands is that they offer quality hand-picked products. The business was created by Deisha Hush and Kiara Battle. Hush says that she knows the time, money and frustration that goes into investing in poor quality hair, which is why each bundle comes from a single donor to ensure the best quality.

I Feel Sooo African, was another vendor from the event, founded by Nana Aku Opata. I Feel Soo African is a specialty boutique that sells authentic customized items from all over Africa. Mainly, the items come from Ghana, but each item is handcrafted and made by master seamstresses. Opata products are also hand crafted by jewelers who use local fabrics, materials, and beads- all from the Motherland.

Kaamilya Williams who is married and a mother of two, is working to build an empire, by teaming up with a established brand, Paparazzi. As an independent consultant for Paparazzi, Williams now can work on building her empire, with affordable, $5 jewelry.

Ronda Pierce, the owner of Chesca’s Designs International, is a small business that creates and produces unique products using African prints and designs made in Tanzania.

The AFWNC, has hosted many events since the start of it venture. This was its third fashion week that they have hosted and hopefully not the last.

Nana Aku Opata (left) and daughter Halima Elbert, set up the booth for I Feel Soo African fashion at the African Fashion Week N.C., held Sept. 8 at the Fruit in Durham. (Staff by Arielle Cummings) Jpeg 7961

Roman Gabriel, creator of Romanztea, serving up some of his sweet tea at the AFWNC Afro Marketplace.   (Staff photo by Arielle Cummings)