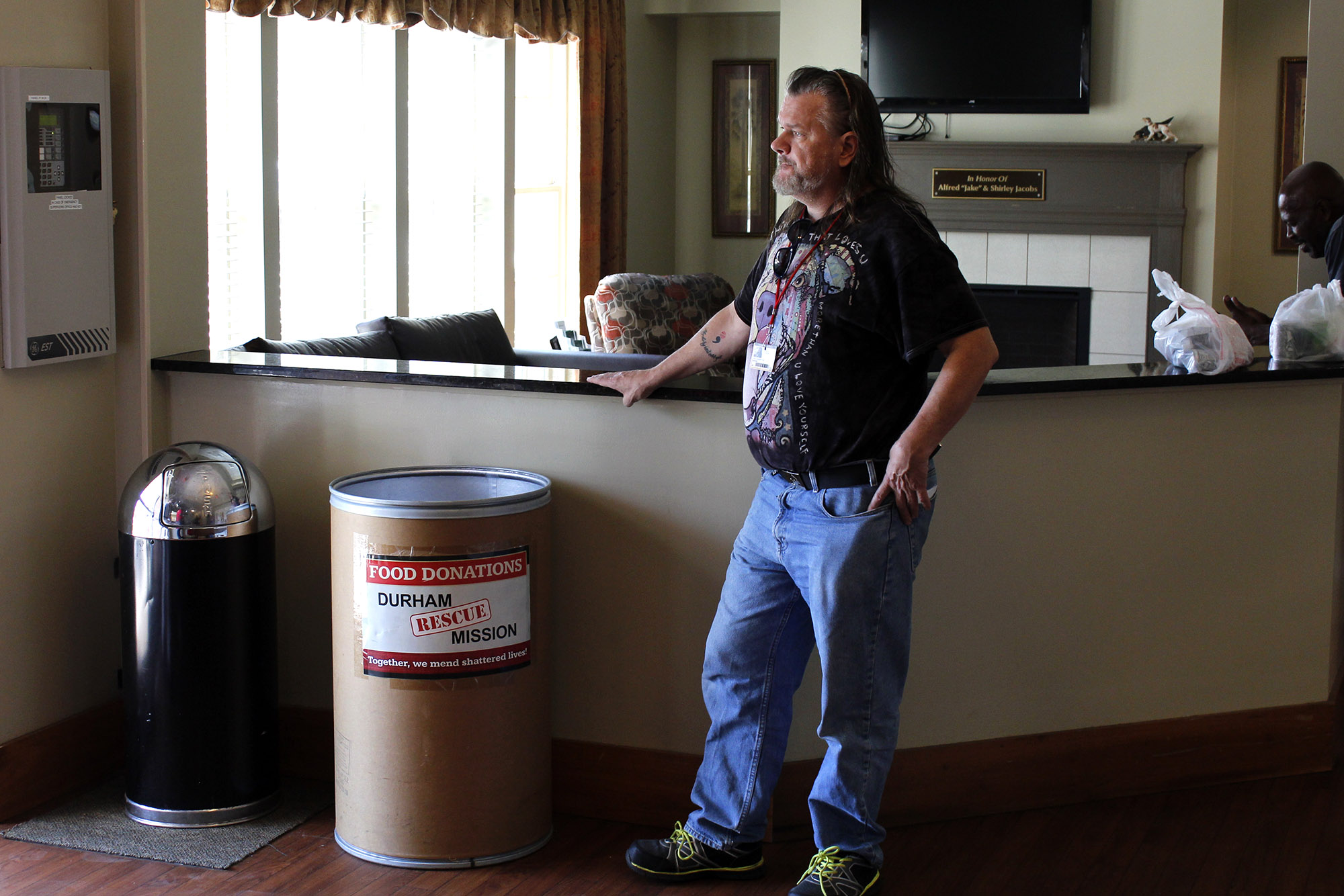 The Durham Rescue Mission has been offering men hope since 1973 when Ernie Mills launched the rehabilitation facility. (Staff photo by Wade McCreary)

Homelessness and addiction are phenomena that have pushed so many over the edge. But the men living at the Durham Rescue Mission have high hopes for a better life. 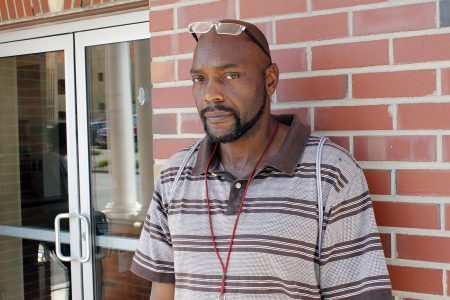 The Durham Rescue Mission was launched 45 years ago by Ernie Mills, who at age 19, was working at the Winston-Salem Rescue Mission and when his father died from alcohol-related health issues at at the early age of 39.

The tragedy of his father’s death pushed Mills to help others so that history would not repeat itself. He began to study to find a way to help others— especially people with alcoholism-related problems.

In 1973, his quest led him to Durham, where Mills realized his calling of opening a rehabilitation facility. 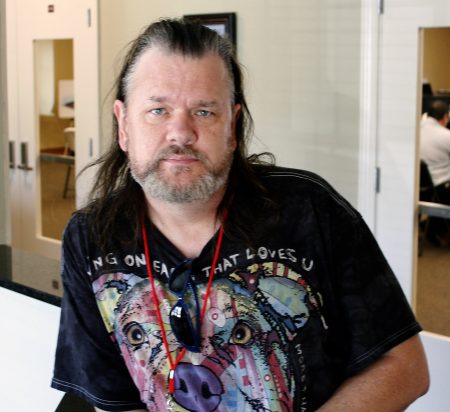 Resident Terry King reflects on on his past three weeks at the Rescue Mission. (Staff photo by Wade McCreary)

“What was funny was he did not know anybody in Durham,” said Volunteer Coordinator David Cash. “He didn’t have any connections in Durham, and no one supported him… However, he left his job (in Winston-Salem) and came here trying to get support to be able to open the Mission.”

“Mills’ intention when he began was to have a house available that housed 12 alcoholic homeless men,” said Cash. “The thought process was we would get these 12 men in and help them and then we would get 12 more.”

In the 1970s, alcoholism and homelessness was a major societal issue, as it is today, so it was not long before the Mission was full and needed to expand. In 1978, Mills purchased the church, which is at the Mission’s present location on the corner of Alston Avenue and East Main Street. This central location made a big difference, Cash said.

Cash says that people in the community saw the work the Mission was doing and they wanted it to continue. As a result, the Mission has expanded and now the Mission owns many houses around its location.

Plus, Cash explains that the Mission gets no federal or state government funding. Everything they do is privately funded.  The Durham Rescue Mission website is the best place to go to donate money. According to Mission research, as little as $2.05 provides a meal.

In the Rescue Mission’s long history, there have been many ups and downs for the men who reside there.

Nevertheless, the goal of the Mission is to help men who homeless and who may be dealing with addiction to get back on their feet. The Mission focuses on the men’s physical, emotional, spiritual and educational needs so that they are able to be fully functional citizens in society.

Cash says the men they see the most have some type of connection with some form of addiction, which very often is fueled by the hopelessness associated with becoming homeless. 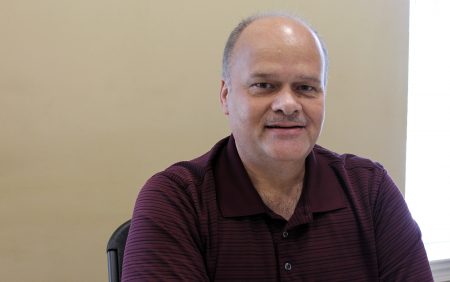 Terry King, a resident, praised the Mission: “The reason I ended up here was because I tried to commit suicide about three weeks ago, but this place saved my life.”

Cash says he feels Mission is about the betterment of men, so residents do not just stay here, they are given chores and responsibilities.

“Rather than them lying in the bed and not doing anything all day, they have a chore like you would if you were growing up,” said Cash. “It instills in them pride, and most people want to feel like they have accomplished something and sometimes they do not have the skills, so we train them to have it.”

The jobs they can choose from are the kitchen, office, maintenance or even the training center.

Another Mission resident, Adam Todd, echoed that sentiment.“It has given me hope and helped me get closer to God,” he said. 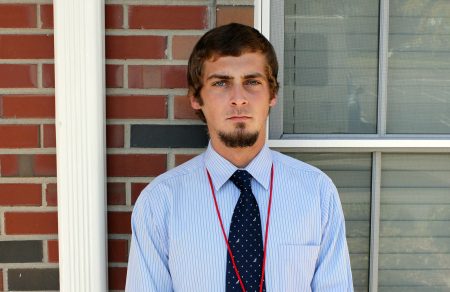 Adam Todd has not been at the Rescue Mission long but says he is optimistic about the future. (Staff photo by Wade McCreary)

Cash says this Mission is just a place of transitions. He says they only have a small number of residents who have lived there for more than three years.

“It is not intended to be a place to live for life, ” Cash emphasized, “(Rather) it is intended to get them to a place where they have an education, a job, and are able to take care of themselves.”

Cash says he has seen people from all walks of life at the Mission — men who most would say seem to have the perfect life. “We have had college professors. We have had Fortune 500 presidents and CEOs,” Cash said, “and a lot of this has happened in the past 10 years. When the economy suffered and the men exhausted all their resources, they had nowhere to turn.”

The Mission wants their residents to ultimately go out and get a good job, according to Cash.  The Mission’s re-establishment program, ” Temps-to-Rescue,” places the men with appropriate local private businesses which have signed up to be community partners.

“The program lets the company see that their men may have been felons but that’s their past, ” said Cash. “We have had many success stories with helping men that started with a private company and now they permanently work for that company.”

Cash says he would recommend the Durham Rescue Mission to all who are struggling, on the streets or feel like all is lost.

Durham Rescue Mission resident William Burnette concluded, “This institution serves a good purpose because they have taken a lot of people off the streets and given them a purpose in life. I would recommend it to anyone who has addiction. It gives them a second chance in life”

Wade McCreary is a journalism student at N.C. Central University. A Cleveland, Ohio, native, Wade is a U.S. Marine veteran serving this fall as a staff writer-photographer for the Durham VOICE.