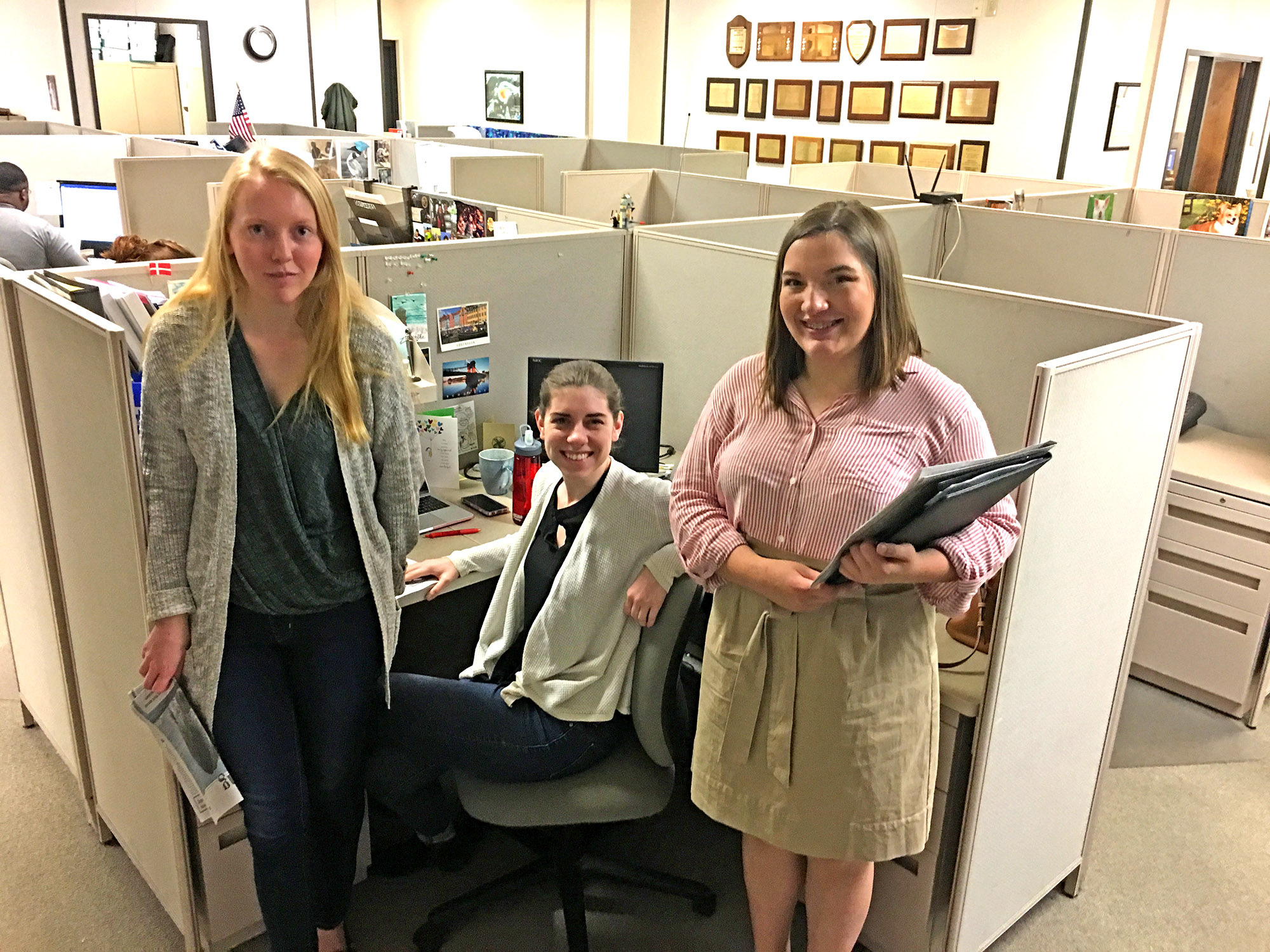 During a visit last spring to the Carteret County News-Times, graduating Durham VOICE print editors Alison Tate, left, and Chrissy Murphy, right, chat with former VOICE reporter Elise Clouser, seated, now a staff writer for the Morehead City community newspaper. During Hurricane Florence, Clouser evacuated to her hometown of Matthews, but was a lifesaver by working remotely as a copy editor for the local newspaper, which only missed one edition through the entire ordeal. (Staff photo by Jock Lauterer)

Editor’s Note:  During her senior year at UNC-Chapel Hill, Elise Clouser served as a staff writer-photographer for the Durham VOICE. Upon graduation in 2017, she was hired as a reporter by the Carteret County News-Times of Morehead City, which donates the printing of the Durham VOICE as a public service. We wanted to know how she fared during her first hurricane. What follows is not only her account, but a testimony to the everyday heroism of community newspapers powering through crisis in spite of the odds.  The Durham VOICE is indebted to the owners and staff of the Carteret County News-Times.          JL

When I moved to the coast a little over a year ago, I knew hurricanes were just a fact of life here. It was practically part of the job description. They blow through, knock down trees and power for a while, and then everyone emerges with buckets and gloves and begins cleaning up. The weekend before Hurricane Florence hit, when it was still brewing far out in the Atlantic, I was fully prepared to hunker down and report it. I was admittedly even a little excited for my first hurricane, it felt like a rite of passage. But by that Monday before the storm, when it was upgraded to a Category 4, it was obvious this was a whole different monster.

That same Monday, our local officials issued mandatory evacuation orders. They weren’t even going to open an emergency shelter in the county at first because they wanted to get out as many people as possible. My editor, the fearless Jackie Starkey, told us to leave if we had to, our safety was the top priority, and my family begged me to evacuate. It was a difficult decision, but Tuesday afternoon, after a solemn budget meeting at the paper, I took my cat and drove to my hometown of Matthews (just outside Charlotte).

Packing to evacuate was surreal. I filled a suitcase with some clothes and grabbed my important documents and a few things I knew I didn’t want to lose. I had no idea what I would come back to, if I would even have home to return to.

A lot of my co-workers stayed behind, and I felt a bit guilty at first for evacuating when I thought I should be out there in the field reporting alongside them. But I ended up being far more useful from my post far away, because I had power and a reliable internet service to relay information to those who stayed behind.

I took on a lot of editor duties the week I was back in Matthews. I was the only person from the newsroom with access to our website, so by default it became my sole responsibility to read and edit copy, write headlines and put up reports and photos online. I also managed our social media, including our Facebook and Twitter accounts, and answered questions from readers. I even did some reporting of my own from afar. Needless to say, I don’t think I was more than several feet away from my computer the entire time.

One night, I think it was Thursday (but I can’t be too sure because the days sort of blurred together) our Facebook account received a message about a boat captain and his son who were trapped on a shrimping vessel as the hurricane bore down on them. I managed to get in touch with their family members and I wrote up a report at 1 in the morning.

Florence lingered in the county for days, dumping wind and rain the entire time. Luckily it was downgraded to a Category 2 by the time it reached us, but the major issue was the immense amounts of rain- more than two feet of it. I had sporadic contact with my coworkers at first because of their spotty cell service, so Thursday and Friday I was mostly focused on providing the most up to date information from the county and weather services. But as my fellow reporters and editor began to emerge on the other side of the storm, I started getting reports from them. Without power or internet, they typed up their reports on their cell phones and texted them to me, which I am still impressed about. I received multiple full reports that way.

A lot of people sent encouraging messages to us that week, which is somewhat of a rarity in the news industry. Many people let me and my fellow reporters know, during and after the storm, that sometimes our reports were their only source of information. Information is a commodity during a hurricane, and as a hyper-local newspaper we had a duty to serve our county.

(As an aside, I managed to get retweeted by the National Weather Service at one point, so that was pretty cool.)

All told, I was gone for more than a week. At first, I was anxious to get back as soon as possible, but even a week later, the roads were still flooded and power was still out, so Jackie told me I was more helpful back in Matthews. When I finally returned to Morehead City Thursday, a week to the day after the storm first hit, I avoided by mere hours a major detour on Highway 70 in Kinston, where the roadway became flooded from a nearby cresting river.

We’re still in recovery mode here. We will be for a long time. There is still debris piled along every road, and every other house it seems has a tarp on the roof. I got really lucky that my apartment has almost no damage, just a fence and shutters down, which will get fixed in due time so I’m not worried about it. It is strange though to see this beautiful place in such a state.

So many others were not as lucky as me, and hundreds have been forced out of their homes. A major issue right now is lack of housing for the people who are displaced. Most of the hotels are closed and there are simply no places to stay in the meantime. I’m still not sure what we’re going to do about this, especially because the emergency shelter will probably be closing soon.

The majority of our reporting right now is focused on the hurricane and especially the recovery, but things are slowly getting back to normal, at least a new normal. We’re back at town council meetings and community events and all that. It’ll be interesting to see where we are next month, six months from now, a year from now, but what I do know is the Carteret County News-Times will continue reporting about and for the community through it all!