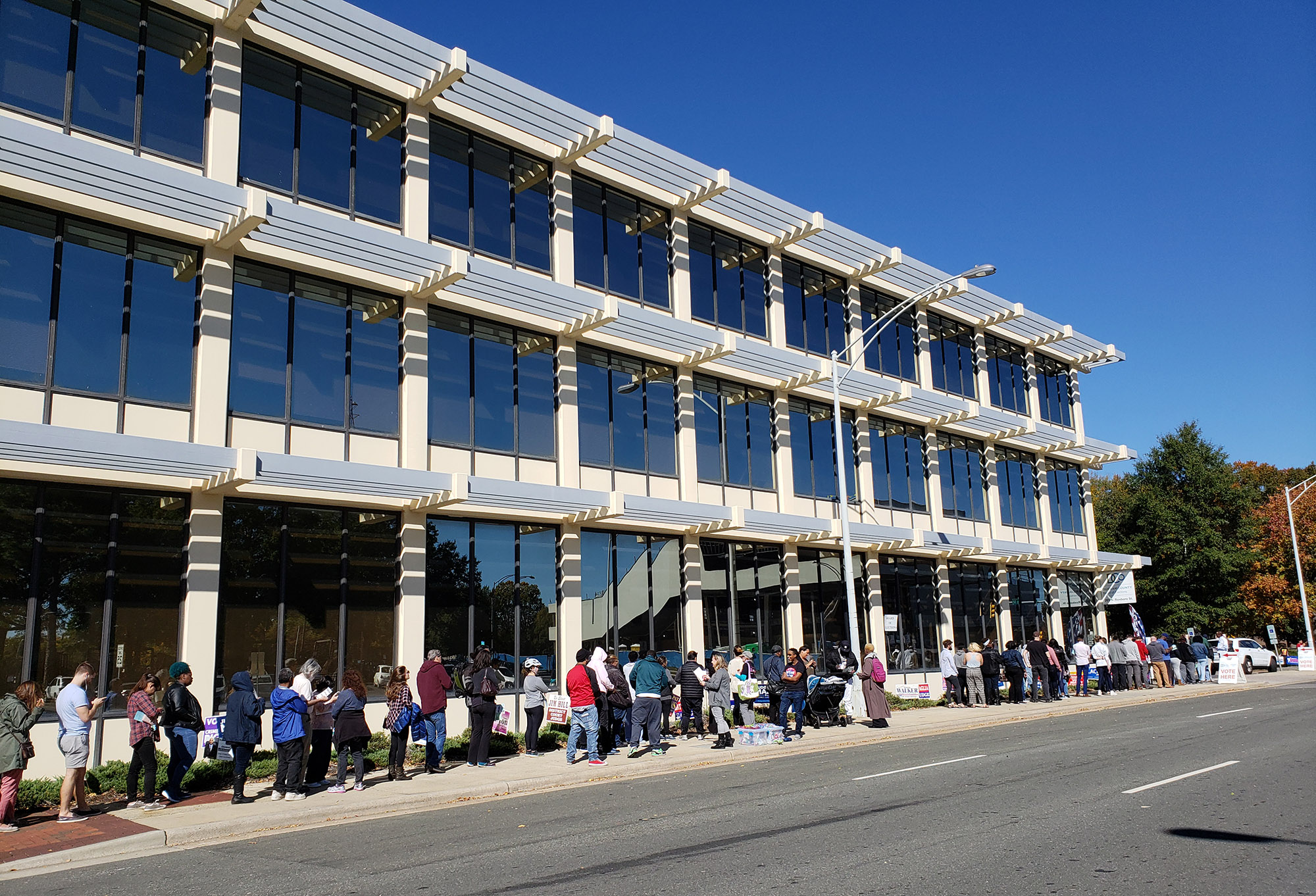 The line wraps around the Durham Board of Elections building on the final day of early voting in Durham on Nov. 3. (Staff photo by Jennifer Maxwell)

North Carolina voters concluded an 18-day early voting period on Saturday, Nov. 3, for the 2018 midterm election with a record number of ballots cast, according to the North Carolina State Board of Elections and Ethics Enforcement. 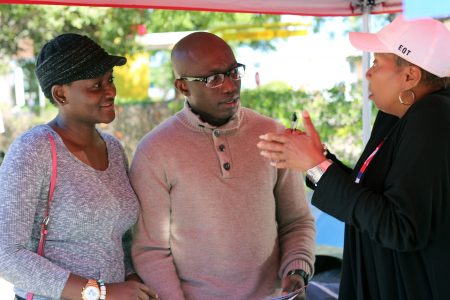 One reason for the surge in this year’s early voter turnout can be attributed to the nearly double number of days for early voting compared to 2014. This early voting schedule was challenged earlier in the year when Durham Election Board Chairman Luke Farley proposed eliminating Sunday early voting. The State Board of Elections unanimously voted on Aug. 5 to keep Sunday hours, settling the issue.

Durham voters had six early voting locations available with weekend hours on both Saturdays and Sundays from 7 a.m. to 7 p.m., maintaining the same hours as during the week in adherence to a new state law. 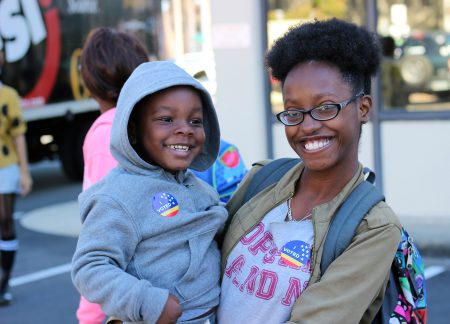 Early voter Angel Holman, 21, embraces her nephew, Kameron, after she cast her ballot at the Durham Board of Elections.  (Staff photo by Jennifer Maxwell)

Other instrumental factors in the increase in early voter turnout are the various decisions on the ballot this year. North Carolinians are voting on legislative candidates, Congress, judgeships, and six controversial state constitutional amendments proposed by the General Assembly.

Durham District Court judicial Democratic candidate Dave Hall, who is looking to unseat longtime Democratic incumbent Fred Battaglia, Jr., credits the turnout at the polls to Durham Democrats’ strong opposition to the six amendments on the ballot and the judges’ races. 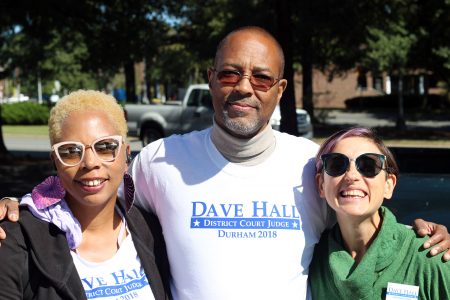 “Our community is becoming increasingly more progressive, and the judges’ races complete that picture,” Hall said. “These races are extremely important and really affect the members of our community from day to day — from traffic tickets and bail to family court.”

As a former civil rights attorney at the Southern Coalition for Social Justice, Hall has spent his career dedicated to criminal justice reform and racial equity, citing these social concerns as the vital reason Durham voters must exercise their civic duty and vote in this year’s midterm election on Tues., Nov. 6.

“This high turnout shows that people are taking an interest,” Hall said. “People are coming to the polls informed, educated, and ready to vote.”

Durham voter and Battaglia supporter Jacqueline Wagstaff  has spent the last 30 years advocating for candidates she supports and said the overwhelming concern with the amendments has consumed many of her conversations with voters before they enter the Board of Election building’s early voting location.

“As an independent thinker, I support people based on what they bring to the table, their experience, and how involved they are in the community,” Wagstaff said. “At every election, big or small, you will find me at the polls, trying to educate voters before they vote. I am 60 years old, and I have seen the days (African-Americans) couldn’t vote. This is my civic duty. It’s important to me.” 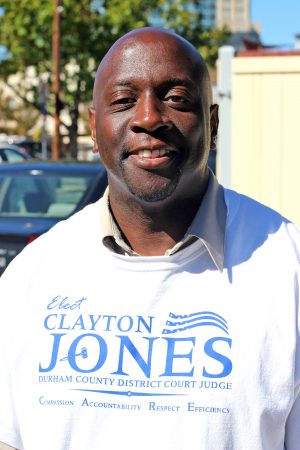 Democratic candidate for Durham County District Court Judge, Clayton Jones, spends time at the Durham Board of Elections, speaking with early voters about the importance of the midterm election. (Staff photo by Jennifer Maxwell)

Clayton Jones, a Democratic candidate for District Court Judge, is the only judicial candidate campaigning against an opposition party incumbent. Jones is running against Republican James (Jim) T. Hill for seat five in District 14.

“People are hurting by what the party in control is doing, and it is galvanizing people to the polls,” Jones said while garnering support from voters at the early voting site. “I am qualified, and I believe I can bring the changes Durham needs.”

Along with local candidates, the early voting sites were alive with organizations and individual volunteers hoping to educate, inform, and sway undecided voters.

First-time political volunteer and veteran Dennis Bynum said even though he has never gotten directly involved in politics before, he realizes the importance of this election and had to do everything in his power to make a difference in the community.

Among those turning out to cast an early ballot was Angel Holman, 21. She pulled up to the Board of Elections with a car full of her Cracker Barrel coworkers, all eager to conveniently cast an early vote.

“My friends are all talking about voting, and people at work are pushing each other to vote and have a voice,” Holman said. “Being able to come to vote early lets us work around crazy schedules and avoid rushing or long lines on Election Day.”

Durham Board of Elections’ reports show there are 231,993 registered voters in the county, with 53 percent being female and 42 percent male. Democrats are the majority registered to vote at the polls with 126,926 registered to the 27,969 Republican individuals registered. Unaffiliated individuals are represented substantially with 75,824 people registered.

With early voting coming to a close, North Carolinians will have one final opportunity to let their voice be heard on Election Day, Tues., Nov. 6, when polls will be open from 6:30 a.m. to 7:30 p.m.