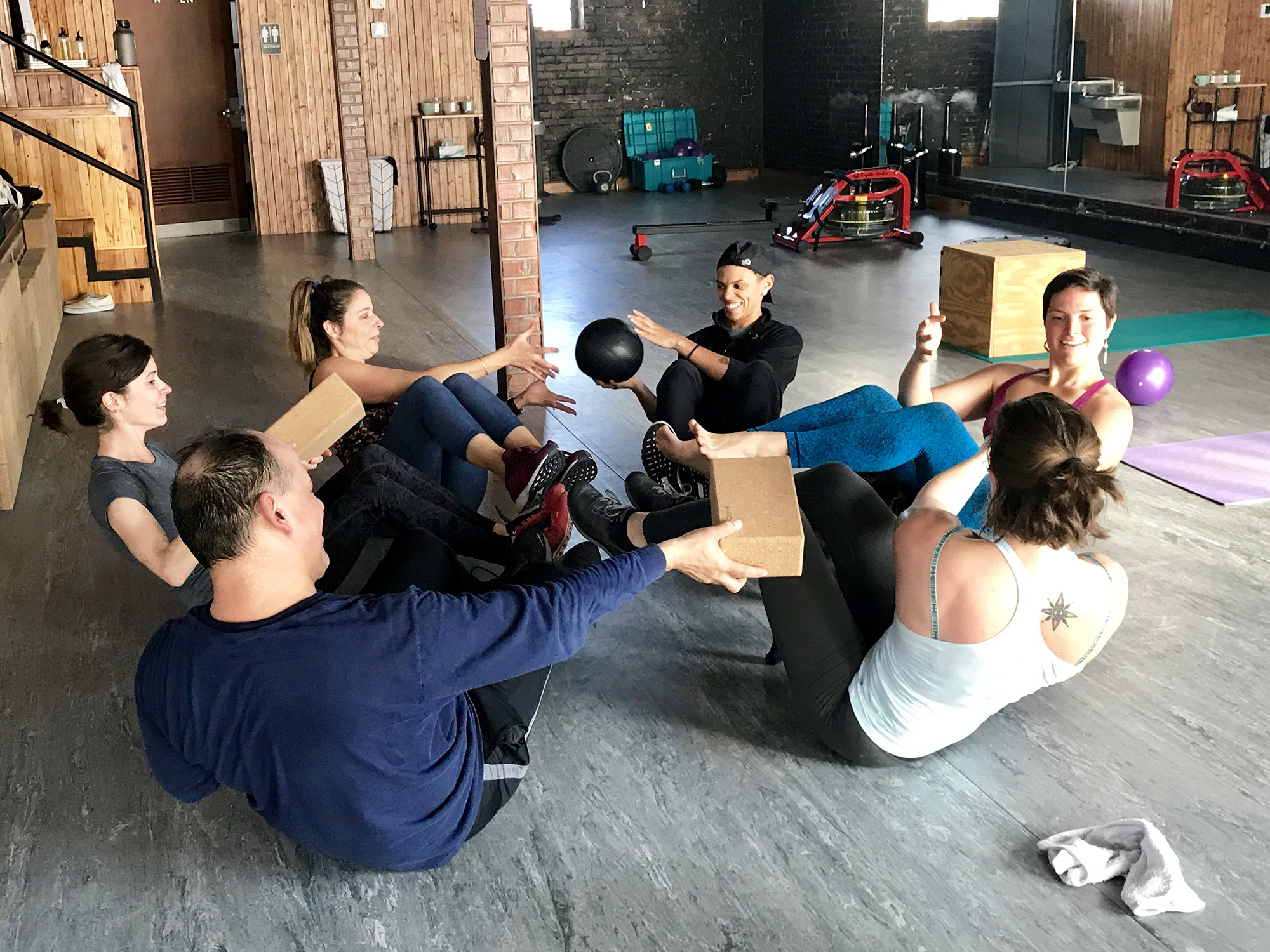 HIIT conditioning class attendees pass around weighted blocks and medicine balls in a circle with co-owners Autumn Nicholas and Josephine McCrann. HIIT, or high-intensity interval training, is a class taught by Autumn on Monday, Wednesday and Fridays from 12:15 pm to 1:00 pm. (Staff Photo by Keeley Gay)

The white, vine-covered building situated along Durham’s American Tobacco Trail is more than it appears. What used to be an old, small Piggly Wiggly has been transformed into a community-focused dance, yoga and music studio. 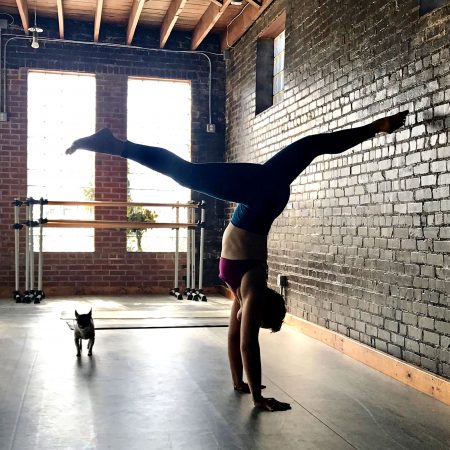 Threehouse co-owner Josephine McCrann practices some yoga moves after finishing a HIIT conditioning class. She is accompanied by Bella, one of the two studio dogs. (Staff Photo by Keeley Gay)

Threehouse Studios opened their doors to the public on Oct. 22, 2017. The idea of a multipurpose studio was developed by Threehouse co-owners Courtney Owen-Muir, 27, from Toronto; Josephine McCrann, 30, from Southern Pines; and Autumn Nicholas, 29, from Fort Bragg. They opened their business in hopes of creating a community dance, yoga and music space where everyone would feel welcome.

“That is the foundation for all of us,” McCrann said. “Having a space for connection and community and inclusion and making people feel comfortable in their bodies and in themselves.”

Each co-owner has a different area of specialization that they bring to Threehouse. McCrann is the yoga director and has both her 200-hour and 500-hour yoga teacher training. Owen-Muir is a dancer and choreographer and is the dance director at Threehouse. Nicholas has been singing, playing and producing music for 17 years and is the music director.

“We each have our own focus within the business,” McCrann said.

McCrann said one of her favorite things about Threehouse is its location. She said being in the middle of so many different kinds of neighborhoods in Durham has allowed them to reach a diverse population.

“In open mic nights, in our yoga classes, in our dance classes, I feel like we’re a reflection of where we are,” McCrann said. “We have all kinds of different people coming in — young, old, black, white, Hispanic — basically any demographic has come through our doors.”

Audra Thomas, a regular attendee at Threehouse, agrees that the studio is a welcoming and inclusive place.

“They’ve just created a really comfortable, warm, welcoming space here,” Thomas said. “I’ve brought a few of my friends — a few people that are new to Durham or just looking for another place to do yoga or work out — and it’s kind of a consensus. Everybody agrees it’s just a really good vibe.”

In addition to striving to create a close-knit and inclusive community, Threehouse also strives to give back to the community that they are a part of.

“We just want to give where we can and support where we can,” McCrann said. “We’re in this community, so we want to be supporting it.”

Threehouse recently hosted a food drive for Urban Ministries of Durham. The studio is also currently in the process of planning a weekend where they will offer free classes to federal workers in the area.

Giving back to the Durham community and beyond has been a priority for Threehouse since they opened in 2017.

“When we opened, it was right after the hurricane in Puerto Rico,” McCrann said. “One of our teachers, Steven, is Puerto Rican, so we did a fundraiser and goods drive for Puerto Rico and raised around $4,000.”

Threehouse is also home to two nonprofit dance companies, OM Grown Dancers and OM Still Growing. Owen-Muir said her goal when opening up Threehouse was to find an additional way to employ her dancers.

“I wanted to give them an opportunity to continue to evolve their individual artistry in the community,” Owen-Muir said. “So the majority of the teachers here at Threehouse in the dance department are company members at OM Grown Dancers.”

Threehouse hosts an open mic night the first Thursday of every month, where they welcome all artists from the Durham community.

“Our first was just an overwhelming response we had from our community, because we had so many different types of genres that came in, from rapping to spoken word,” Nicholas said. “We even had a tap-dancing group come in and do a piece and it was just so cool.”

Nicholas said that open mic nights were a platform for her to express herself when she was younger. She wanted to create that same opportunity for people in Durham.

The Threehouse co-owners said they love the unique space they’ve created and want everyone to be able to enjoy what they are passionate about, whether that be music, yoga, dancing or something else.

“We want it to be accessible to people,” McCrann said. “We want whoever wants to come to be able to come.”

Owen-Muir, McCrann and Nicholas said they want Threehouse to be a home for anyone and everyone in the Durham community.

“We just want to be a space for whoever,” McCrann said. “Whatever identifiers you use for yourself, you’re always welcome here.”