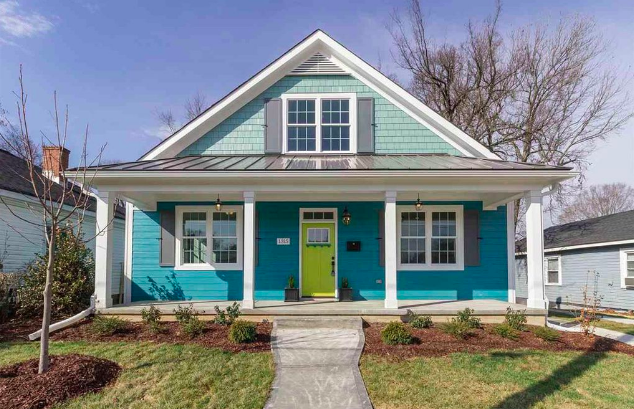 The Habitat for Humanity building site on the corner of Dowd Street and North Elizabeth Street felt surprisingly quiet for an active construction zone. Not for lack of activity — three volunteers along with the site supervisor were busy building a sizable shed in the backyard of the soon-to-be home of five. 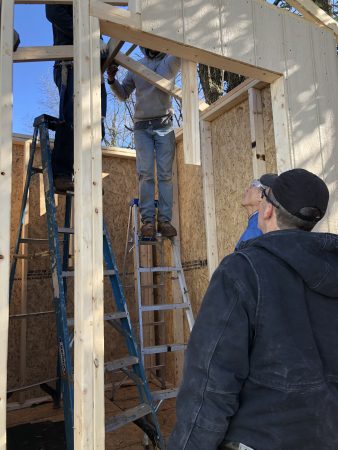 But between the pounding of hammers and roar of saws, the only other noise came from the occasional school bus driving by, probably picking up students from the charter school a block away. The Friday afternoon quiet of the modest neighborhood was a far cry from the up-and-coming downtown scene Durham has become known for in recent years.

Historically, Dowd Street was more than just another East Durham neighborhood. It was once home to East End Grade School, the city’s third African-American elementary school, where civil rights activist Ann Atwater sent her children until it burned down in 1963. Her efforts following the fire to find her children a new school was just the beginning of her storied campaign to end segregation in Durham.

Her unprecedented success as a local activist and leader eventually formed the basis of the book, “The Best of Enemies,” by Osha Gray Davidson. The book’s highly anticipated screen adaptation will be released this April.

Today, if you looked directly across the street from the school’s repaired brick schoolhouse, you’d find a building that doesn’t remotely belong to the same era: a brand-new bungalow painted teal with a shining copper roof and a lime green door.

Sandi Spier, California native and part-time developer, sold this four-bedroom house for just short of $500,000 last year; less than she should’ve gotten, she said. According to Realtor.com the property’s value has increased by 475 percent since Spier knocked down the single-story brick building that once held its place.

Many Durhamites have mixed feelings about these drastic changes in property value and the gentrification that often follows. Richard Kells at Habitat for Humanity of Durham, thinks the recent development creates both benefits and challenges within the local community.

The nonprofit has built over 400 houses in Durham during the past 35 years for low-income families struggling with rent. Contrary to the popular myth that Habitat “gives” the homes away, these families buy the home and pay a mortgage like everyone else.

However, what makes Habitat unique is that home buyers are able to pay their down-payment through an exchange called “sweat equity,” where the buyer volunteers for 350 to 450 hours at building sites instead of writing a check. According to Kells, this exchange enables Habitat to provide mortgages without interest rates, which helps keep them affordable.

But Kells explained, that unfortunately this cycle is made more difficult by the increase in land and appraisal values when houses are flipped or rebuilt by developers. Especially if the new houses are built on the same block as Habitat sites, as in the case of this East End neighborhood.

Lenders like Habitat are able to sell their homes according to a simple equation: cost of construction plus cost of land. One of the consequences of gentrification is that it causes that land variable to shoot up.

However, the biggest battle Habitat fights is actually the appraisal value of the property. “You can imagine if there are $350,000 houses next door,” Kells said, “that affects the appraisal of the home we’re building because we build high quality, well-constructed homes.” 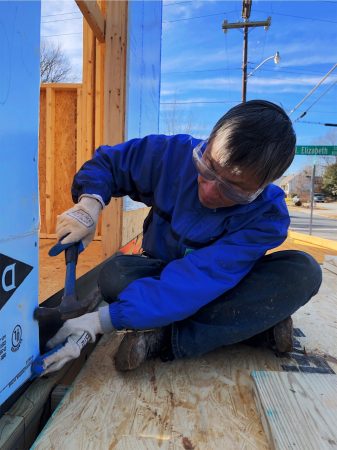 Kien Lao, a 67-year-old retired electrical engineer, moved to the U.S. from Vietnam to go to college. He now splits his time volunteering for Habitat and the Durham Food Bank (Staff photo by Hannah Towey).

Though this has never stopped Habitat from providing affordable housing, it leads to what the company calls a “silent second mortgage,” or an additional mortgage Habitat lends the family in order to cover the increase in appraisal values.

Simply put, funds that could be going towards building more homes are instead put toward covering the increase in mortgage cost caused by nearby developments.

Sandi Spier is well aware of the possible harm her part-time renovations and reconstructions could be causing the community. In fact, she hopes she is helping to “balance out the gentrification happening,” by volunteering for Habitat, donating to the Durham Rescue Mission and serving as a member of Preservation Durham.

While volunteering at Habitat, Spier said she brought up her guilt of contributing to gentrification with one of the supervisors. In response he told her, “the opposite of gentrification is decay.”

Spier continued and said, “If we didn’t get in there and fix these houses they would eventually be condemned and torn down and the people living there would need to find a new place to live anyway.”

Habitat’s construction site on Dowd Street and Spier’s teal-blue house on Tucker Street are separated only by a mere 600 feet and an old brick school house that was once engulfed in flames. But what they share beyond their proximity is a city as rich in its people as in its history.

When asked about his favorite thing to do while volunteering for Habitat, Kien Lao, a 67-year-old Durham resident, didn’t say building roofs or cutting insulation. He put down his hammer, shook his head and said, “The people. Talking to the future owners about their home — boy, can you see their excitement.”