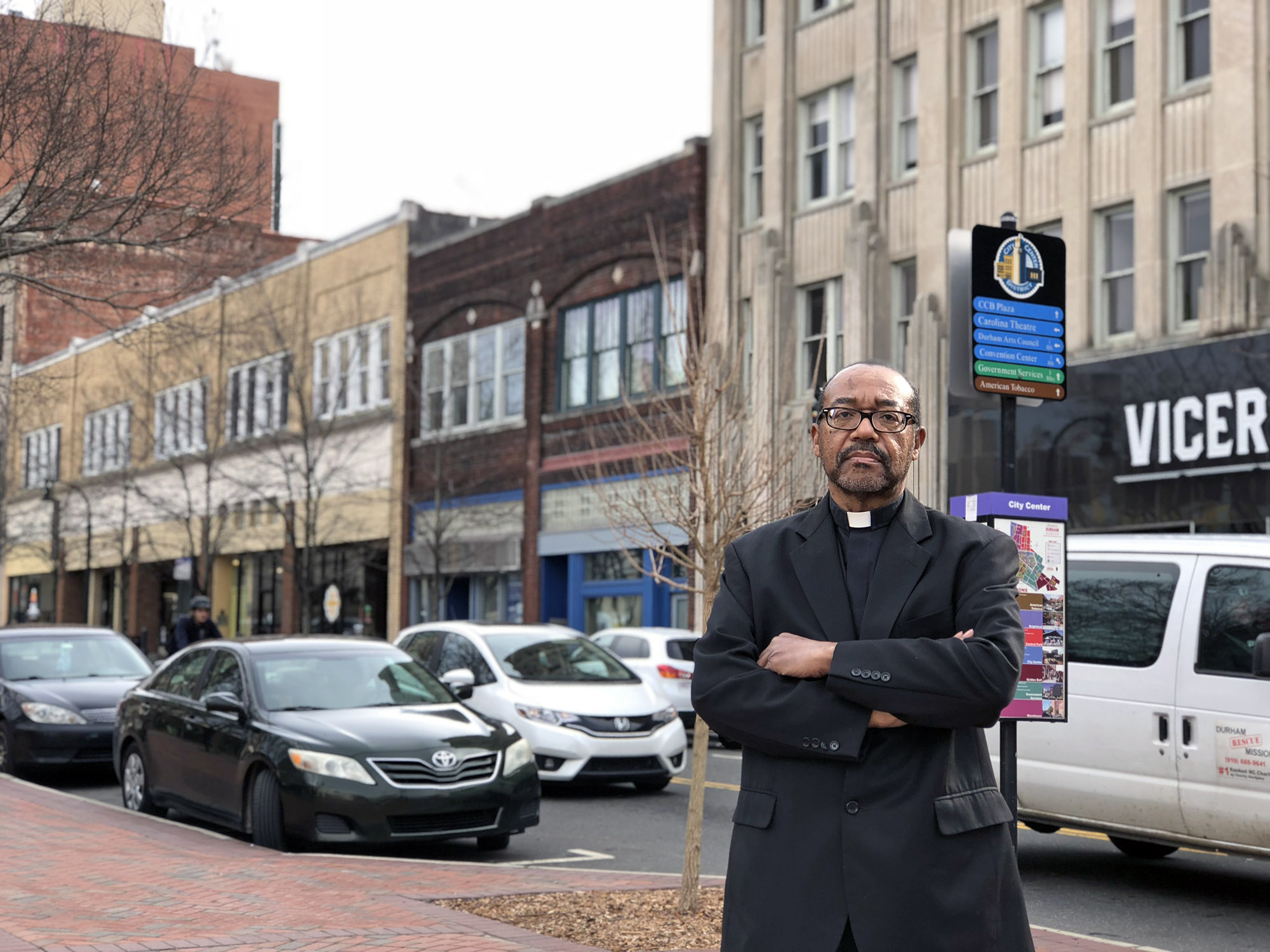 Warren Herndon stands in front of the shops on W. Main St. near the Old Five Points intersection in downtown Durham – which Herndon says was like the New York City of Durham before urban renewal projects began in the 1970s. (Staff photo by Hannah McClellan)

Few people can claim the honor of receiving a lifetime service award, but the Rev. Warren L. Herndon of Durham was awarded two on the same day.

Both awards were presented on Martin Luther King Jr. Day to celebrate Herndon’s more than 30 years of leadership in civil rights history, community service and social justice advocacy. Mayor Steve Schewel presented The Longevity and Distinguished Service award to Herndon at The Tower at Mutual Plaza, and Rep. David Price gave him The Clergy Leadership, Humanities and Missions Award at First Presbyterian Church.

Herndon is a senior associate minister and retired senior level administrator from Duke University Medical Center. He said these awards are especially meaningful to him, due to his doctor’s recent medical advice to pull back from such a stressful schedule.

“As I have transformed over the years, it has been my faith, my educational pursuit and my scholarly desire that has been able to bring social justice full circle,” he said. “I was humbled and walk with gratitude at this sense of love, kindness and acknowledgment for me to be used as a vessel to keep the history of the life and legacy alive for our next generation of community leaders.”

Schewel said the Longevity and Distinguished Service Award was created specifically to honor Herndon’s service in the community, and that he wanted to present the award to him on Martin Luther King Jr. Day because of how instrumental Herndon has been in organizing community and educational events for the holiday.

“One of the things that makes Dr. Herndon special is that he reaches broadly,” Schewel said. “He is inclusive in his approach, regardless of race or religion, and that makes his service to the community special.”

Since moving to Durham with his family in 1968, Herndon has strived to be influential in his community. He has dedicated his efforts to reducing homelessness and poverty, and worked closely on the Durham Human Relations Commission for over 25 years. He served on the Durham Merchants Association for more than 15 years, traveled as a human rights delegate to five international meetings with government leaders and was a candidate for Durham City Council and Durham Community Commission. 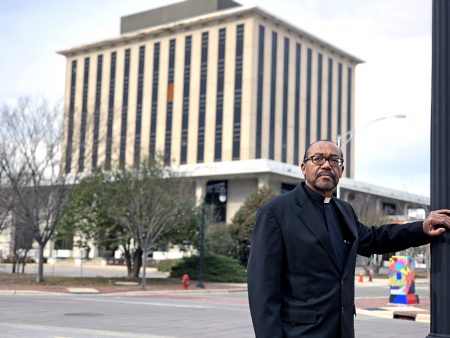 Warren Herndon stands in front of the South Bank Building, which sits at the Old Five Points intersection in downtown Durham. The building was built in 1974 – Herndon says it is one example of how urban renewal affected business in downtown Durham. (Staff photo by Hannah McClellan)

As a graduate from North Carolina Central University, and a former adjunct lecturer at NCCU, Herndon is a committed student and scholar. He is passionate about Durham’s past – particularly its African-American history – and knows the background of nearly every landmark in downtown Durham. Herndon is especially interested in the history of King’s visits to Durham, and said despite the lack of any historical marker downtown, according to his research, King was a guest speaker at least five times in Durham.

“After I received my master’s degree, that’s when I understood the importance of learning how to do research. A lot of what I’ve done is to research a lot of the topics of homelessness, poverty, inequality, gender inequality for women, and it is insane. What you think the systems and industries are saying is not the facts,” he said. “So learn to do your research and it’ll give you more depth into the understanding of the problem.”

Herndon also emphasized the importance of mentors in his life who encouraged him and helped him grow as a leader – the late Hendrik Van Dijk, who he met when he was 19 years old, Elroy Lewis, retired bishop at Fisher Memorial United Holy Church of American and Joe Harvard, retired pastor at First Presbyterian Church, who mentored him for over 20 years. He cited the continued role of his family, neighborhood and community in his success. And of course, he said Martin Luther King Jr., who was “so far out ahead of an average leader,” first inspired him to pursue social justice clergy leadership.

As someone who saw mentorship positively impact his own life, Herndon said doing the same for others is an important part of his service to the community. He has been an adviser for 30 years in The Rites of Passage, a program by The Durham Business & Professional Chain with NCCU that provides mentoring experiences for young black men who come primarily from single-parent homes. The program ultimately aims to reduce violence by providing positive information about African-American history and culture to improve racial and cultural pride.

Lois Mayfield is a teacher’s assistant at Oak Grove Elementary with a fourth grade special needs program. She has known Herndon for over 10 years, after meeting him at their church, The City. She joined the Rites of Passage program with her son, Bushido Mayfield, when he was 12. Now he’s 18, and said Herndon has mentored him all his life.

“It’s a life saver. There’s doctors, professors – men of elite – and they have been with the program for years, and they do it without pay, and they give of their time, of their talent,” Lois Mayfield said. “They’re reaching out and trying to make a difference in the community, to help young boys to go on the straight and narrow – to capture them before it’s late, rather than after the fact.”

While Herndon will be taking a step back in his work due to medical advice, he will continue to be a mentor at The Rites of Passage. Along with plans to teach a history course on Durham at Duke, Herndon hopes to get back to doing things that will improve his health.

“I’m going to have to go back to playing golf, traveling more – I retired and I had (been to) 22 countries and 37 states, since I retired I’ve probably only done three, so I’m going to start traveling more worldwide,” he said. “I am going to be praying more and learning to love my enemies, even at the level that Dr. King taught us –  because that in itself reduces stress.”