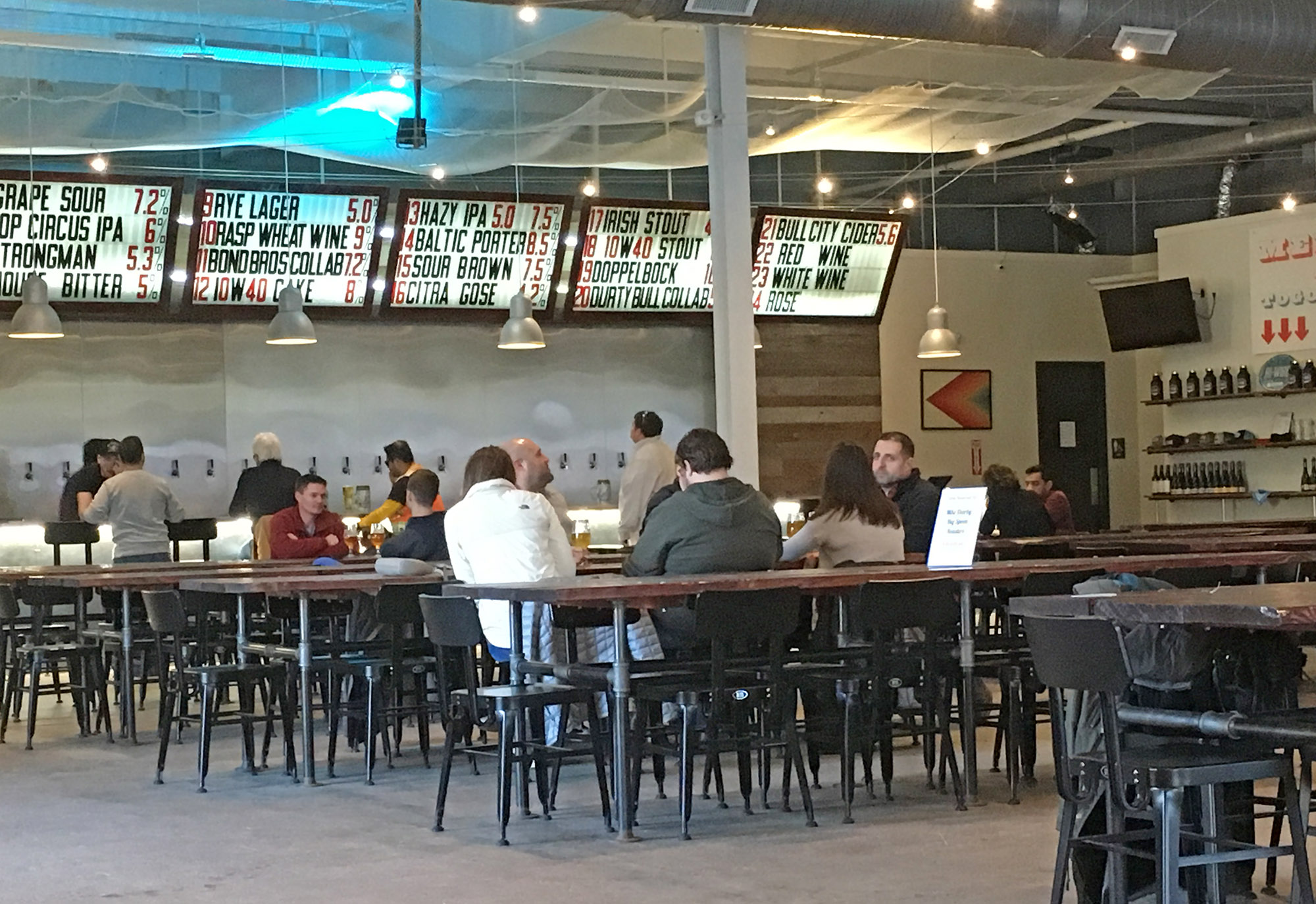 The taproom usually features six of the beers produced by their brewery in Asheville, in addition to a mix of local beers and guest taps. The company often allows people to come in and use the space for free, hosting yoga classes, charity events and parties. (Photo by Spencer Carney)

“We’ve really received a warm welcome from the community so far,” said taproom manager Kelly Bachman. “I think that Hi-Wire is becoming pretty well-known in the beer market in Asheville, and the company was looking to expand. Durham was an easy sell for them, since it really has kind of that Asheville, artsy vibe.”

Bachman said that while the Durham taproom does not brew in-house, shipments are delivered from Asheville every two weeks.

The Durham taproom occupies a 10,000-square-foot warehouse with an indoor seating area and outdoor patios. Dogs are welcome inside, provided they are on a leash. Kids are also welcome in the bar.

The taproom bustles with parties, whether hosted by Durham residents or the bar. The brewery is game-centric with cornhole, soccer pool, disc golf and table tennis.

“Most of the bartenders live here or come from Durham,” Bachman said. “We want to involve the community as much as we can.”

Some residents, however, worry that the arrival of the taproom signals oncoming gentrification in Durham’s Golden Belt area.

“As happy as I am that this area is cleaning up, I just know that things are going to be more difficult for those of us who live around here,” said patron Katie Thomas. “I’m just waiting for the notice of the rent going up, and I know some of my neighbors have already left because they don’t see a point in staying.”

The brewery also lets people use the space for events, such as dog adoption days and Durham charity Crayons2Calculators’ 5K benefit.

Bachman said that while the brewery can’t accept every charity event, they strives to host as many events as possible.

“We’re hosting Crayons2Calculators on February 1,” Bachman said. “The charity collects supplies for teachers and students, and Hi-Wire will be donating 10 percent of sales that day to them.”

“I’m so glad that Hi-Wire has developed here,” said Ashley Gardener, a customer from Durham. “I’ve said for years that someone should do something cool with these old buildings. I’m excited for it to be a place that I want to come and feel safe visiting.”

The Durham location is open Monday to Thursday from 3 to 11 p.m., Friday from 2 p.m. to 12 a.m., Saturday from 12 p.m. to 12 a.m. and Sunday from 12 to 10 p.m. Hi-Wire Brewing sells merchandise, including T-shirts, hats and water bottles. The brewery often allows people to use the space for free for hosting yoga classes, charity events and parties. Yoga is hosted every Saturday morning. All payments go to the instructor.