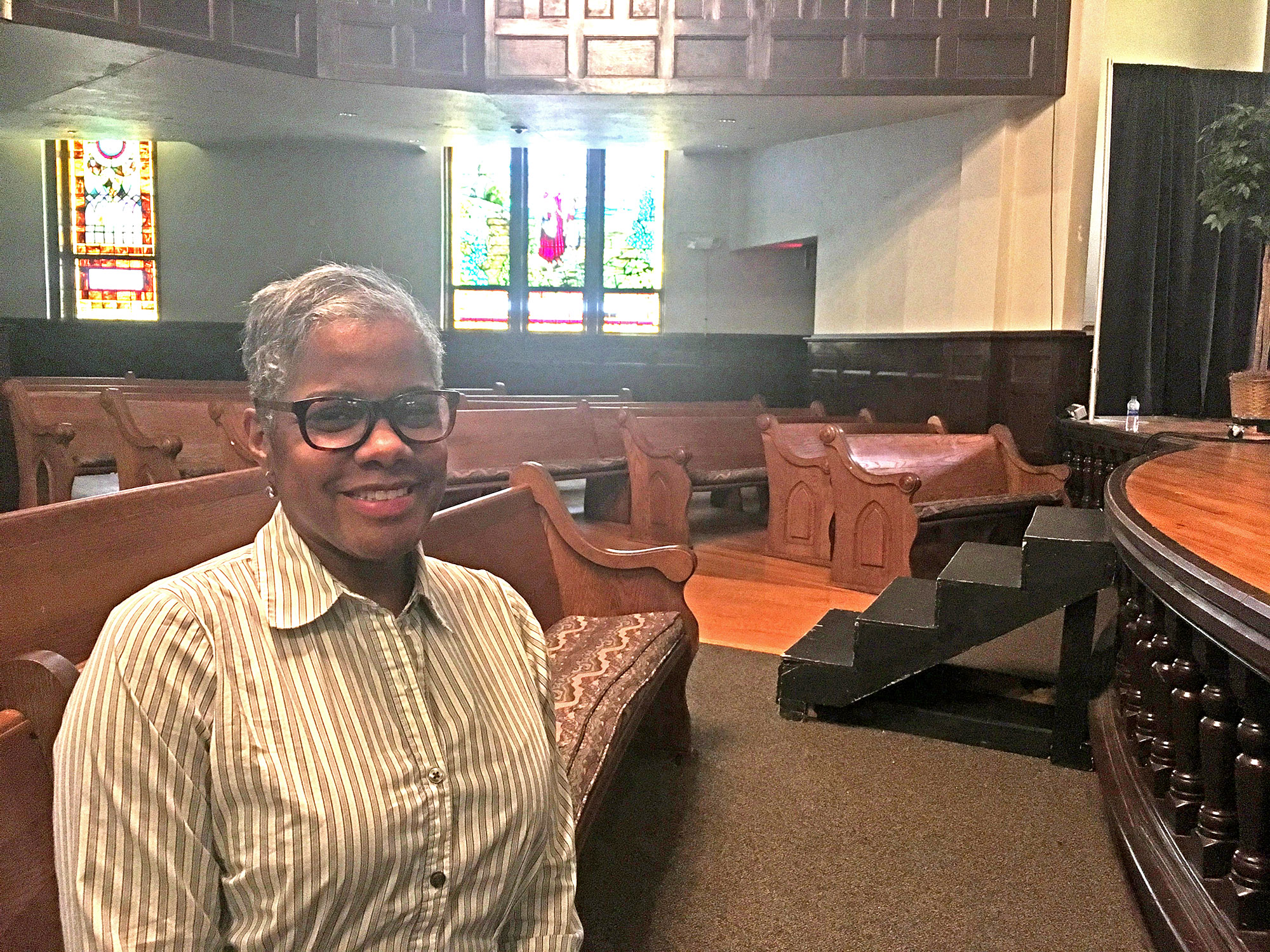 Lana Garland was inspired to become a filmmaker after watching Spike Lee’s 1989 film “Do the Right Thing.” Garland, the curator for the Hayti Heritage Film Festival, has been credited by her peers with saving the festival from being phased out two years ago (Staff photo by Jack Frederick).

Longtime writer, producer, director and now-Durham resident Lana Garland fell into filmmaking because a movie spoke to her. Literally.

In 1989, Garland bought a ticket to see Spike Lee’s film “Do the Right Thing,” the iconic movie she says was “revolutionary” for the budding black film industry. In the film, she was moved by a recurring scene of an African-American girl who was drawing with chalk in the streets. The movie cut back and forth to the girl and other scenes, leading to a big reveal near the end of the film: the girl’s name was Lana.

“That was like a sign for me,” said Garland, the curator for the Hayti Heritage Film Festival. “So literally right after that I started applying to film school and ended up going to Syracuse for television and film.”

Up until watching that movie, Garland had enjoyed films, but never considered creating them herself. She grew up in Philadelphia and often stayed up late to watch classic Hollywood films, organizing her schedule around the movie times she read in the Sunday paper.

“Filmmaking was like air to me,” Garland said. “I fell in love with old movies.”

That love for filmmaking remains today, after a career in the industry that has taken her all over the world, from New York, to Copenhagen, Denmark, then to Durham seven years ago.

Two years ago, Garland joined the longtime black film festival based out of Durham. Because of her hard work, the event is marking its 25th year of films and festivities from Feb. 11-14. It just so happens that the 1989 Spike Lee film will be the first film shown Thursday.

Garland noted the film wasn’t selected for personal reasons, but to honor the 30th anniversary of its release. Though at the very least, it fits as a minor homage to the woman who stepped in and saved the Hayti Heritage Film Festival from dying out.

A festival on the decline

Two years ago, Angela Lee, executive director for the Hayti Heritage Center, was firm in her decision. The annual film festival would be phased out after 2017.

After 23 years, the event had simply lost its reputation, according to Lee. The screening equipment didn’t work, films usually didn’t start on time and attendance dwindled. Sometimes, even 45 minutes after the scheduled start time, the film still wouldn’t have begun.

“Those two things alone are enough to kill a festival,” Garland said.

Then, just as Lee had made up her mind, Garland came forward and asked for an opportunity to turn things around. In spite of the issues, Lee said yes, giving the festival one final chance to be revived.

If anyone could turn things around, it would be Garland, who has worked at HBO and considers working with noted director Earle Sebastian on the documentary “Red, Hot and Cool” to be one of her career achievements.

In one year, Garland improved the experience dramatically. After dismal attendance the previous few years, 300 attendees came through the Hayti Heritage Center during the 2018 festival, which was a big jump. Garland minimized her role in achieving that immediate improvement.

“Really, it was simple,” Garland said. “It was really easy because they allowed me to do something that’s not that difficult to do.”

But Lee credits Garland as the reason the Hayti Heritage Film Festival will still be showing films this year.

“This has really been Lana,” Angela Lee said. “It has been a change of (180) degrees…She is the reason we are celebrating the 25th anniversary.”

Garland said most of what she added to the festival was much-needed infrastructure. She bolstered the equipment, stuck to start times and worked hard to show the community that this was something worth attending again.

She admits, though, that none of that might have happened if Lee had said no. The festival might have died on the vine right then.

“If she had said, ‘No, Lana, I’m sorry, you can’t take over the festival,’ I would have said, ‘Thank you very much,’” Garland said, “and I would have left and never come back to it.”

Garland was motivated by the same ideals that got her interested in filmmaking. This was a unique festival and she wanted to protect it for its value in promoting black voices within the industry, something she’d like to see even more of.

A festival on the rise

While last year’s festival had 300 people attend, Garland is anticipating at least triple that to attend this year. It’s proof the festival is not only no longer hemorrhaging, but flourishing under Garland’s leadership.

With a few days before the festival begins, they’ve already far outsold the number of tickets sold last year. This is a part of Garland’s incremental plan to transform the festival from where it was fizzling out to a prestigious professional event. The possibilities in the future only excite her.

“Last year, we were able to show there was great possibility,” Garland said. “Last year, we knew it would be a pivot year and enough people came and saw, and they started talking. The feedback was really, really good.”

From here, Garland hopes to take the next step after putting forth another quality event. She wants to continue to expand the opportunities during and beyond the festival, such as eventually offering classes that teach people educated in other fields how to contribute to the filmmaking process.

Dawn Booker, who helps market the festival, said Garland is driven to make Hayti into a success, just like Garland was inspired to get into making film.

“The point of Hayti is to recognize filmmakers who are much like Lana in their pursuit of creating stories that resonate within the communities that they represent,” Booker said. “For her, I feel like a part of what she’s doing is the logistics and the operations and all of the things that make the festival run, but then the other part of it is her own authentic commitment to filmmaking and creating a space for stories to be told.”

Booker sees the festival “poised for growth” moving beyond 2019. Garland organized sponsors for the event for the first time this year; she’d like to see even more join the project in the future, eventually leading to some payment for organizers in the festival, who are all volunteers currently.

When Garland joined on, she could see the possibility this could be a reputable black festival once again.

I was really kind of frustrated because I knew the possibility,” she said. “There was a possibility here that wasn’t being met.”

Now that she has found that possibility, she’s just trying to turn it into a reality.

Passes and information on the festival are available on the Hayti Heritage Film Festival website. All-festival passes cost $50, while single-day passes cost $25. Individual film and workshop tickets can also be purchased the day of for $8 per ticket and there will be some free events.

Jack Frederick, a UNC-CH senior majoring in journalism and American History, is from Lumberton. This semester he is serving as the sports editor of the Durham VOICE.