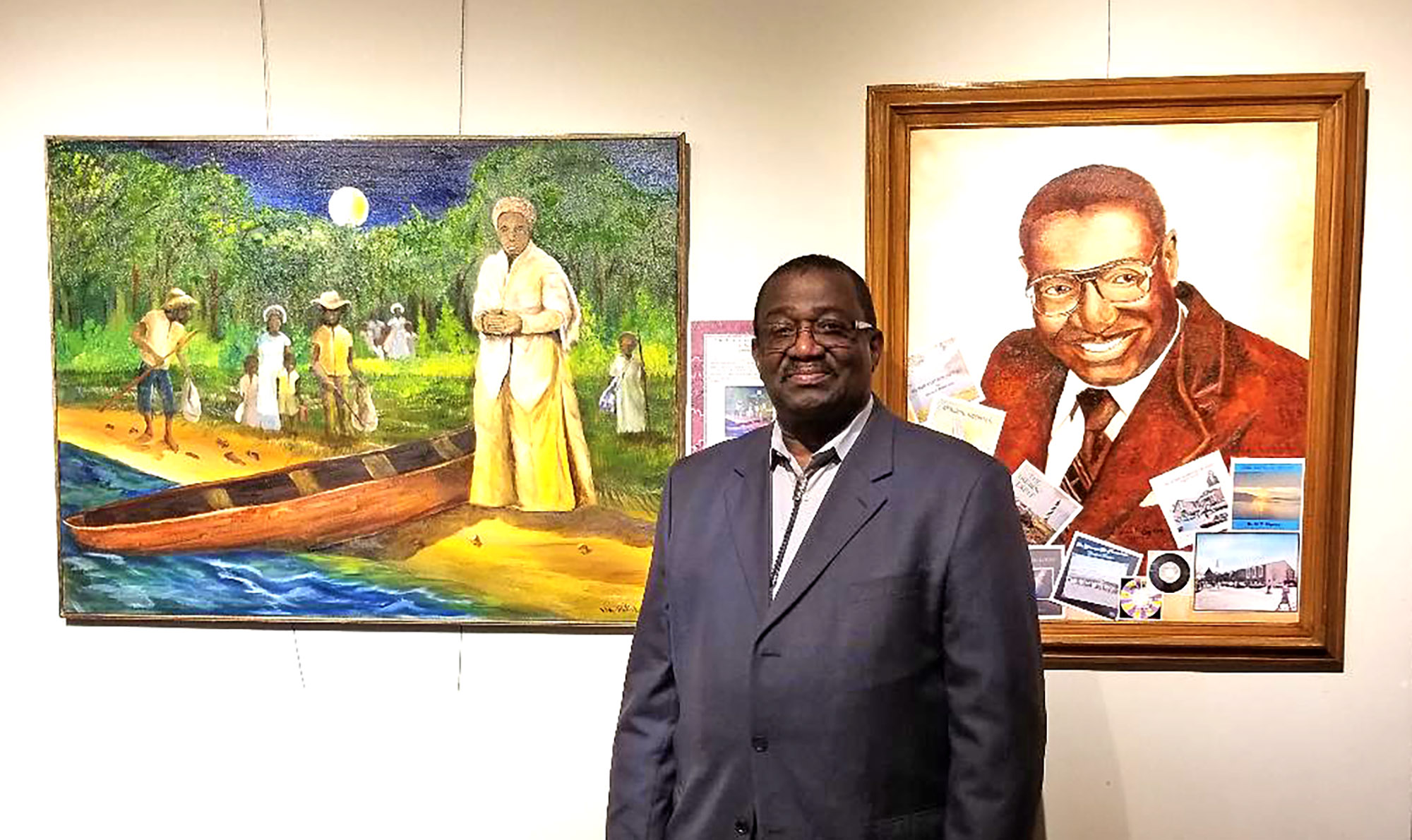 Willie Bigelow with his paintings titled “At The River’s Edge – A Black Migration” and “A Durham Great Gospel Leaders.” To encourage his art when Bigelow was younger, his uncle would pay him for matchbook drawings. (Staff photo by Sabrina Berndt)

The exhibition began in 2016 when Willie Bigelow, an artist and Durham resident, approached Angela Lee, the executive director at Hayti, to bring an event to the center that would recognize African-American artistic talent well beyond February, especially young talent.

“I found that these great African-American artists aren’t showing their work because they don’t have a venue for them to show,” he said.

Bigelow is included in the list of 20 participating artists, with two pieces in the exhibition. “At The River’s Edge – A Black Migration” is a memorial to his wife, Irene Bigelow, who was a quilter and had planned to quilt an image of Harriet Tubman. Irene passed away April 8, 2018, before she could start the project, and Willie painted the image in her honor.

“She had me to sketch it out on drafting paper, the figures she wanted to use and how she wanted to use them, but she never got the opportunity to cut them out and actually build the quilt,” Bigelow said. “So as a memorial to her, I went on and did the painting.”

The second painting, “A Durham Great Gospel Leader,” shows his father surrounded by his achievements as a pastor and member of the Durham community. His father, Rev. Dr. Willie T. Bigelow, was known for his role at Saint Paul Baptist Church, where he witnessed growth from 200 members to over 4,000. He was also known as the “Radio Pastor” for his services on the station WSRC.

“He was an innovator. The record covers you see on the picture, they’re records of his sermons,” Bigelow said. “I knew that he was a legend in Durham for a number of years.

Most of Bigelow’s art has a personal connection, except for six paintings featuring classic cars at Mark Jacobson Toyota dealership.

“If I don’t put some personal feelings in it, it’s not going to be worth anything to anybody else,” Bigelow said.

Bigelow found all of the participating artists through personal contacts, including Olivia Gatewood, who became familiar with the Hayti staff after a one-woman exhibit 25 years ago. An artist residing in Rougemont, North Carolina, she has participated in the exhibition since the beginning.

Gatewood is known for her textured acrylic paintings, some of which appear in the personal collections of Oprah Winfrey and Suzzanne Douglas. For the Black History exhibition, she wanted to express the connections between the United States and Africa. 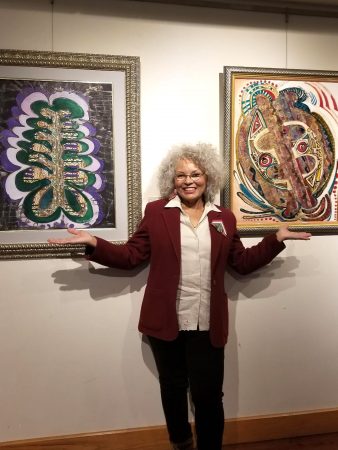 Olivia Gatewood next to her pieces “Aya” and “Gye Nyame.” After her trip to Ghana, she found out that she had Ghanaian heritage from an ancestry DNA test, making the paintings more special to her. (Staff photo by Sabrina Berndt)

“If you see my work, you’ll see it’s not necessarily typical Afrocentric scenes. I think my work probably shows more of my background,” Gatewood said. “Each person’s work reflects on their personality and what influences them in life, and I think the work that I do shows who I am, which is kind of weird and strange and abstract.”

Her paintings, “Aya” and “Gye Nyame,” both represent Adinkra symbols from Ghana. Aya represents growth, as it portrays a fern that can endure turmoil despite its circumstances. Gye Nyame is a way of expressing that God is everywhere.

“I like that symbol because it shows that even though there are interruptions in the shape, the spiral continues regardless of those interruptions,” she said. “It’s like a reflection of life.”

Along with paintings, Gatewood sells jewelry at affordable prices. She wanted to find a way for everyone to acquire a piece of artwork despite financial means. Each piece is individually made, including earrings, and therefore unique.

Her work is found in four other local exhibitions – all of which are listed on her website – and she will be honored at the North Carolina Executive Mansion for her contributions in the arts on Feb. 14.

Although the Hayti exhibition features established artists such as Gatewood, Bigelow makes an effort each year to find new, upcoming African-American artists.

Crystal Carter, a newly exhibiting Durham artist, had a unique style that immediately stuck out from the pieces surrounding her drawings. Instead of bright colors and acrylic-covered canvases, Carter’s work simply used pencil with a pop of purple for accent – the purple representing royalty. 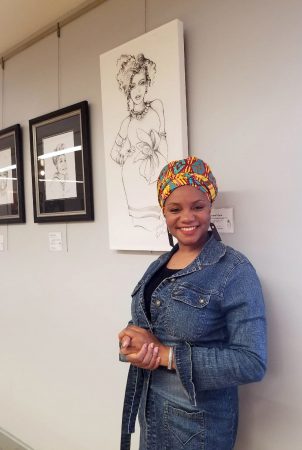 Crystal Carter, one of the new artists in this year’s exhibition, with her piece titled “We Are Wonderfully Made.” Each one of her drawings features a small pop of purple to create a theme of royalty. (Staff photo by Sabrina Berndt)

A peer approached Carter at the Southside Church of Christ who knew of the exhibition and began communicating with Bigelow and Lee. She noted their willingness to answer all of her questions before the event.

“They took an unfamiliar situation and really made it easy,” Carter said. “Anyone who wants to be a part of this is going to find that it’s an easy situation to come into.”

Carter also wanted to express her heritage and culture in her drawings. Her first two exhibited prints are of her father in his cook uniform from the Army and her mother. The third, a 13-by-36 canvas print titled “We Are Wonderfully Made,” is meant to represent the beauty in typical African-American features.

“Art is such a global thing, but it’s also such a personal thing as well,” she said. “My perspective is on a smaller scale – what was it like in my family; what was it like growing up black or in the projects? The smaller stories are what connects us.”

Carter said she plans to expand her website by allowing online purchases. For now, she wants potential customers to experience it in person.