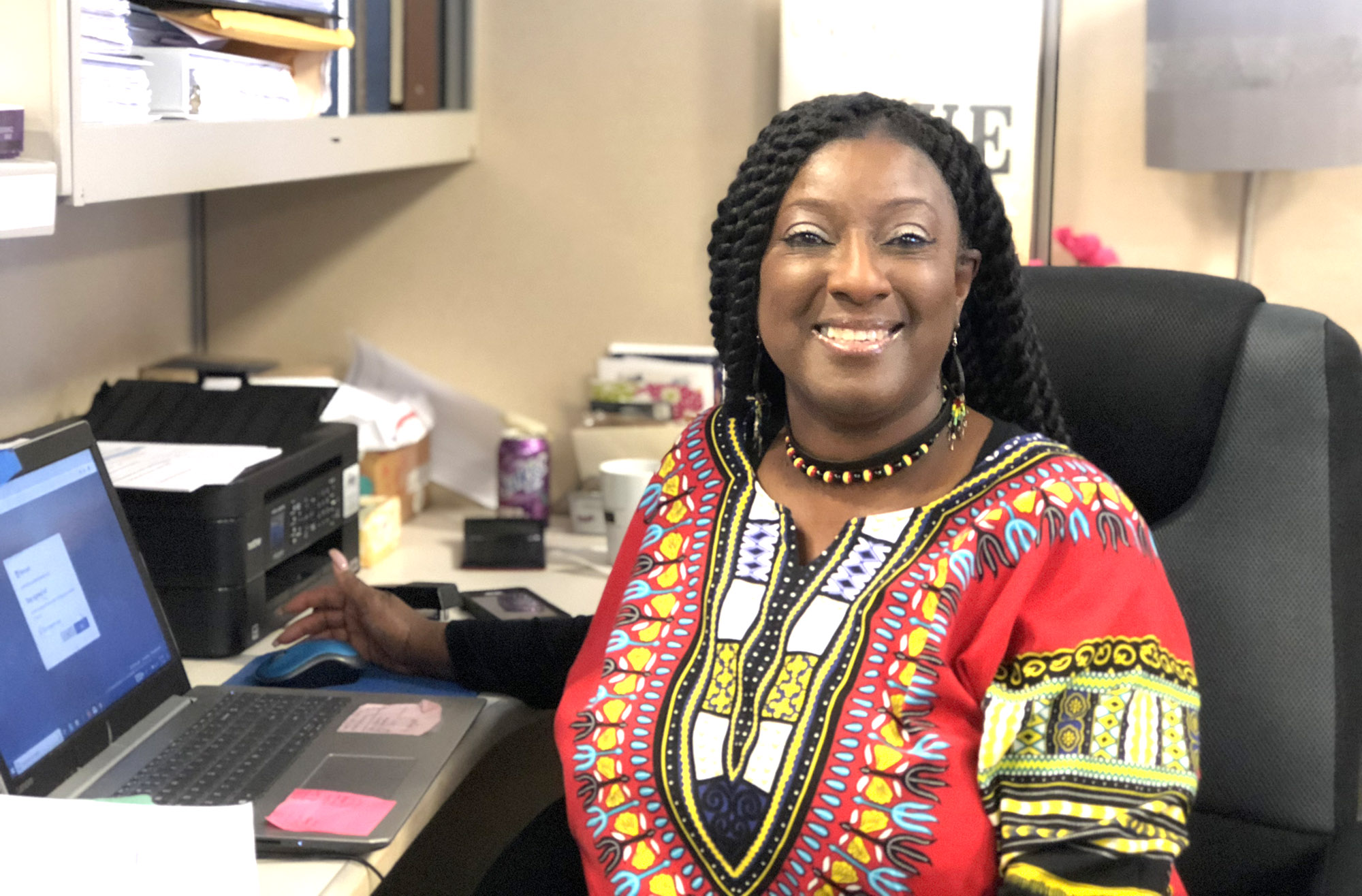 Cynthia Harris, program coordinator of Rapid Re-Housing, working at her office in ReCity. “I really, really love what I do. And I love families, I love children and I think everybody deserves a home,” she said. (Staff photo by Hannah McClellan)

According to the 2017 Annual Homeless Assessment Report, about 1,200 homeless people are living in shelters or transitional housing in Durham.

Robin, who asked to keep her last name anonymous to protect her children’s identity,  is one of them.

Robin, a veteran and National Guardsman, is staying at a shelter in Durham with her three children. She works at The Salvation Army and hopes to resume active weekend duty once she has a permanent address.

“When you’re a parent going through a situation like this … I haven’t even had time to schedule the mental breakdown I probably should’ve had by now,” Robin said. “You have to stay positive, stay upbeat for your children – you don’t really get a chance to have pity parties or to be emotional or fall apart.”

Recently, Robin was referred to Housing for New Hope, a nonprofit organization in Durham that helps clients find and maintain housing. Robin and her family expect to move into a brand-new home in February.

“They were very sensitive to my needs, and, Lord, it was like they were protecting the White House. They would not tell me where it was,” she said. “They wanted to make sure everything was up and running first before they took me by the house, and I think they did pretty good. The house they found me was amazing.”

Cynthia Harris, the Rapid Re-Housing program manager for Housing for New Hope, oversees the program and reaches out to landlords in Durham to find those willing to rent to people with potential rental barriers, such as past evictions, criminal records or lower incomes.

“The majority of people we work with are people who have rental barriers – someone that landlords probably would hesitate to rent to,” Harris said. “I’m looking for landlords who are willing to give a second chance.”

To qualify for the program, people, who can not verify that they are homeless, must go to the Department of Social Services to take a Coordinated Intake Assessment to be referred to one of the area’s shelters. From there, the shelter determines if the individual should be referred to a housing program.

According to its 2017 Annual Report, Housing for New Hope served 1,729 individuals and families that year. Harris said the Rapid Re-Housing program houses about 65 households, approximately 200 people, per year.

In January 2019, Harris said the Rapid Re-Housing program was able to find housing for 10 households, a total of 29 people.

“Honest to God, I don’t know how we did this,” she said. “Every day you’ve got to get out there and hustle and find a place for them, and then you’ve got to call back, keep calling back the landlords and keeping the clients motivated to keep on going. But we were lucky.”

Robin and her family have been homeless for two years and living in a shelter for the last seven months. While it hasn’t been an easy process, Robin said that she’s trying to appreciate some of the opportunities for change the process has given her.

“When I first got homeless, the one thing that I did that was kind of crippling at first was to beat yourself up,” she said. “You think you’ve lost everything, but what actually happened was you were given an opportunity to start the life that you wanted to have.”

‘Anybody can be homeless’

Once a referral is made and someone is accepted into the Rapid Re-Housing program, Harris said they are typically able to move the client into permanent housing within 30 days. Once the client finds housing they like and are approved for, the program will offer rental assistance to help pay startup fees or double deposits.

Recently, Harris said she’s encountered cases of homelessness involving school teachers, a recent college graduate and even the phlebotomist at her doctor’s appointment.

“Anybody can be homeless,” she said. “Even when you’re looking at somebody who is homeless, you really don’t know their story.”

Robin was a young mom at the time she became homeless and said she didn’t know how to advocate for herself or ask questions about rental policies. She wishes more people were aware of the many factors that can lead to homelessness.

“Not everybody who’s in homelessness has a drug addiction or mental illness,” she said. “Homelessness is not something that you can catch, it’s not a disease.”

A lack of affordable housing is a growing issue in Durham. Harris said it is affecting the number of landlords willing to work with the program and the amount of young people and families in their caseload.

Sarah Meiners, executive board member of Housing for New Hope, said she hopes the organization will continue to expand opportunities to provide affordable housing to its clients.

“We are in Durham, as in much of the country, experiencing a housing crisis, as far as affordable and sustainable housing option for all of our people,” Meiners said. “So to me, Housing for New Hope provides that opportunity to people in Durham – whether they’re currently experiencing homelessness or they’re recently transitioning out of homelessness, being able to provide a stable shelter for these people is so critical to successful outcomes for people.”

Harris said she hopes to secure more flexible spending dollars for the program to buy clients things like furniture, groceries or uniforms.

“Our motto is, ‘preventing and ending homelessness one valuable person at a time,’ and that’s exactly what we do.” Harris said. “That’s the way I see (our) clients that I work with – I see them as valuable people, and we want to end this.”

Robin, who likes poetry, art and hanging out with her children, said she is ready to move into her house and get back to focusing on more than just where her family will live. She said it’s important for other people living in homelessness to not give up.

“A lot of times people have pity parties or they just give up, but you can’t give up when you’re fighting for your life,” Robin said. “You have to advocate for yourself, and you have to do it from a place of security, knowing that if this person can’t help me, help is out there. You just have to be willing to put the work in.”