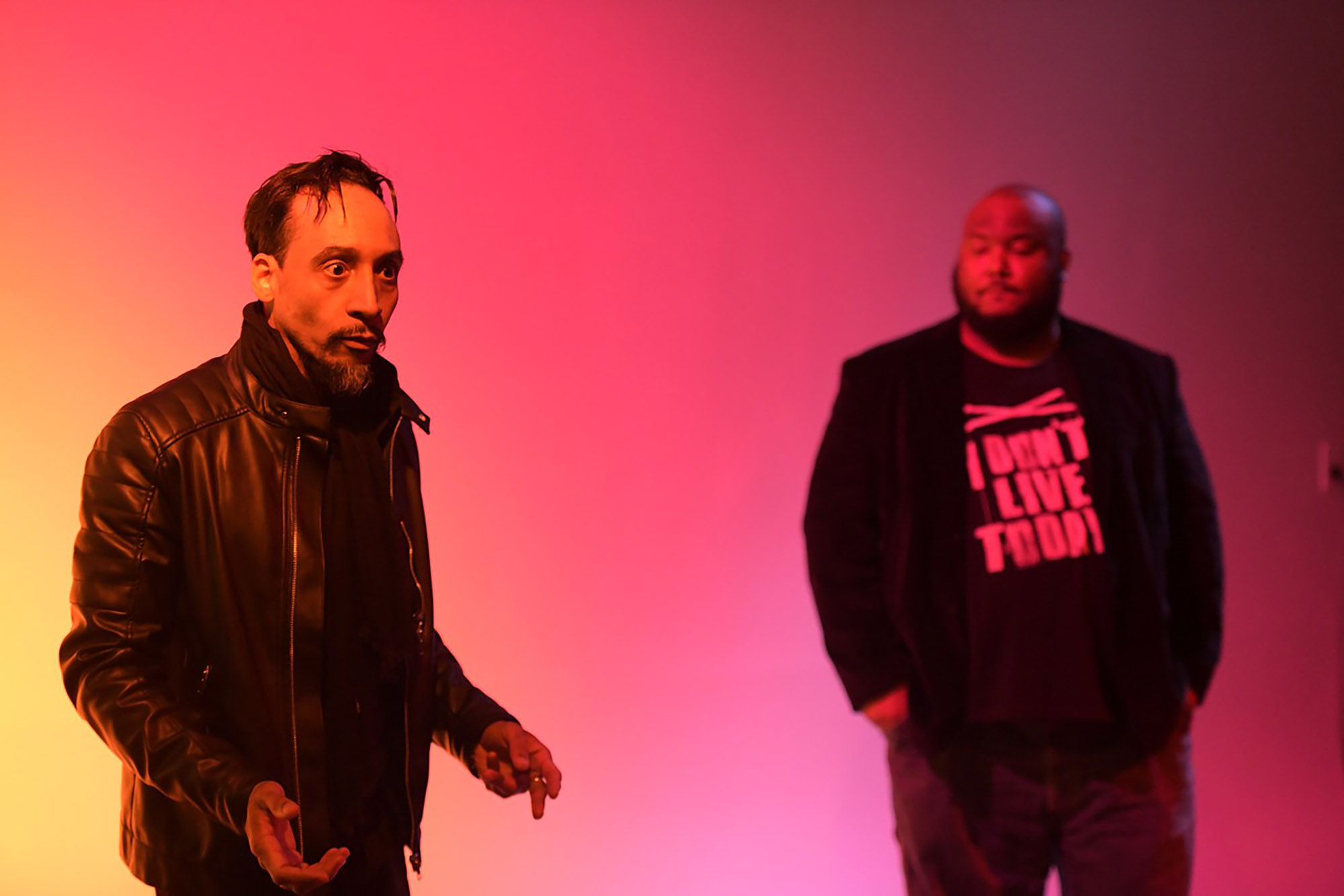 Filmmaker Dennis Leroy Kangalee and producer Chris Everett discuss their personal journey creating, and then destroying, "As an Act of Protest." (Photos by Denise Allen Photography)

Filmmaker Dennis Leroy Kangalee had set out to create a masterpiece. Less than one year after his debut film, “As an Act of Protest” was released, Kangalee sent that masterpiece flying off the balcony of a hotel in Germany.

Kangalee’s independent film is a 144-minute-long drama whose unedited, anti-Hollywood aesthetic and emotionally raw acting seek to mirror the journey of a black man internalizing the racism he witnesses throughout his country.

After an emotional journey of writing and shooting the film inspired by Kangalee’s personal experiences in New York City, “As an Act of Protest” was all set for release in 2001.

“Making the movie was rather intense and beautiful. But, when I edited the film and then after 9/11, I felt like a complete failure,” Kangalee said. “So, I went one day, and I threw the master footage off of a terrace. I was on the sixth floor of a small flat, and I just threw the footage out into the street. I don’t know. I was really depressed, and that was it.”

An audience member watches “As an Act of Protest,” an independent film about racism and police brutality. The film screened at Shadowbox Studio in Durham on Feb. 22. (Staff photo by Hannah Towey)

Eighteen years later, Kangalee’s film caught a second wind. He replaced the shattered tapes with a bootleg copy that had luckily been circulating at the time. He then connected with producer Chris Everett of Speller Street Films, known for his award-winning documentary, “Wilmington on Fire,” and they’ve worked together ever since.

While Kangalee and Everett redistributed the film, they hosted a public screening Feb. 22, at Durham’s Shadowbox Studio, a videography space at 2200 Dominion St.

At the show, Kangalee recalled the Amadou Diallo shooting in 1999, when an unarmed, 23-year-old immigrant from Guinea was shot and killed by four New York City Police Department officers in civilian clothing. After officers fired 41 shots at Diallo, anti-police demonstrations engulfed the city

“I felt like something had to be said,” Kangalee said. “I was going out of my mind, having to internalize and deal with the racism. In general, that’s a bit of a rite of passage for many people of color and particularly for young people.”

“It was not a Hollywood type of movie,” Kangalee said. “And, I don’t think films about racism should look pretty because racism is not pretty. And, it should be almost as exhaustive and as annoying as it actually is.”

Following the film’s disquieting conclusion, audience members were able to participate in a Q&A with producer Everett and director Kangalee. The story and message resonated with many in the audience, especially activist Kimberly Muktarian. 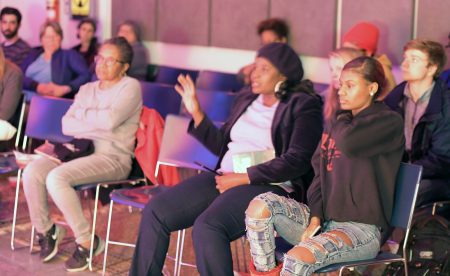 Kimberly Muktarian, an activist and journalist who works for “Save Our Sons” in Raleigh, talks about her personal connection with the frustration of the film’s main character.  (Photos by Denise Allen Photography)

“First of all, I wanted to say thank you so much for portraying this struggle so drastically because I am an activist,” Muktarian said. “My organization is Save Our Sons, and I do have two African American males of whom I dread every day once they go out the door, because you just don’t know what will be in store for them.”

Brenda, a woman from Burlington, who requested that her last name not be used, thanked Dennis for painting such a disturbingly accurate picture. “I’m so glad that young people are pushing this kind of image out because we need it,” she said. “I sat here, and I twisted and turned. But, it was very necessary. So, thank you.”

Everett and Kangalee are excited to continue showing “Protest” in Durham, the city Kangalee will soon call home as he begins his permanent move to Bull City. The writer said he was done with New York and that Durham is “the next big thing for independent artists.”

The pair emphasized that igniting conversations like the one held in Shadowbox Studio is the film’s most vital aim amid the 2019’s polarized political climate.

“Where we’re at now, we’re living in a nightmare frankly,” Kangalee said to the crowd. “And, that’s sort of what I tried to make the movie out to seem. It’s just one drawn-out nightmare.”

As the room fell quiet and the bloodred title blinked against the black screen, Kangalee closed the discussion.