The Hayti Heritage Center buzzed with nervous energy hours before the 4 p.m. showing of “Inside Studio Real: A choreopoetic sitcom” on Feb. 23.

The play, written by director Dasan Ahanu, involves poetry, movement and emotion. Ahanu, 44, is from Raleigh and has been an artist since the ‘90s, he said. He has performed original poetry for years and runs a poetry series at the Hayti Heritage Center.

“Inside Studio Real: A choreopoetic sitcom” has a sitcom format filled with musical transitions. Throughout the six episodes, characters read inspirational poems that deviate from the show but touch on social issues.

This was the third play this season that incorporates poetry and spoken-word performances for the Black Poetry Theatre group, where Ahanu serves as a co-founder. Ahanu describes his lightbulb moment as, “I just woke up one morning and had this idea, and I was just like, ‘I wonder if I could write a choreopoem and write a sitcom.’”

His creation became a play within a play about a group of radio show cast members. Set in an office environment, the dialogue touches on social issues such as masculinity in the workplace, navigating human relationships and struggling to reach aspirations, Ahanu said.

Ajani Kambon, who has lived in Raleigh for 16 years, plays the character of Drew. “Drew has a hard shell and is the type of person who likes to speak up,” Kambon said. “He’s the brave one.”

Kambon is no stranger to the stage, but he is new to the acting world.

He stood on stage four years ago for the first time at an open mic poetry event hosted by Ahanu. Kambon had always been interested in performing but could never overcome his stage fright. From a young age, he loved poetry, music and dance. He remembers watching movies and listening to songs over and over as a child, trying to recreate them in his own way. In college, he went to his roommate’s play rehearsals and became inspired to perform one day.

After his first poetry performance, he continued attending open mic events. He now writes children’s books and has recorded two CDs. But if he had to choose one career, it would be acting, he said.

Playing Drew in “Inside Studio Real” was his third theatrical performance.

Growing up as an only child, he said he never needed a room full of people to act, he could act all by himself. Now, acting in front of an audience is nerve-wracking because he’s passionate about theater, he said before the show.

This is her second production, but theater is something she has always wanted to do, she said.

While newer to theater than Kambon, she said she didn’t want to miss the opportunity to work with Ahanu when she heard that he was casting people for his latest work.

“Dasan is very big in the poetry community and just inspiring and such a positive and overall great person,” she said. “To just be in anything of his is something I wanted to be a part of.”

Her character, Renita, is outspoken and bold, she said. “She’s been in this workforce that’s male-dominated for quite some time, and she’s frustrated because she doesn’t see another counterpart like herself on the team.” 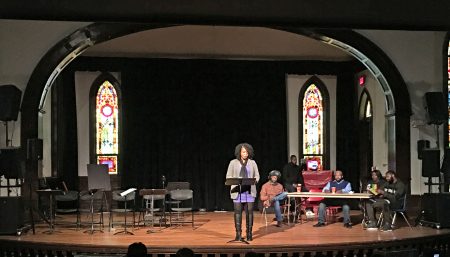 Patricia Asongwe performs a poem. “We didn’t know each other before this production, and we’ve blended well, and it’s almost like we’ve been friends forever,” she said of her castmates.  (Staff photo by Natasha Townsend)

Throughout the play, Renita advocates for a diverse environment where more females are welcome.

Asongwe said that she feels this relates to her personal life in many ways, where she works in the information technology field.

“Sometimes when you feel you are speaking to higher management and vocalizing your concern, you feel like you’re not being heard, and it’s falling on deaf ears,” she said. “The workforce is where you spend eight or nine hours of your day. You want it to be somewhere where you feel like you’re appreciated and not just tolerated.”

She hopes that audience members feel inspired to fight for what they want and realize that no one should apologize for following their ambitions.

“Don’t be afraid to step up to the plate, but at the same time understand that whatever you’re fighting for also influences and affects other people around you as well,” she said.

The Chicago native, who has lived in Morrisville for more than three years, is hopeful that acting can become a full-time occupation.

“I hope I deliver a good performance and don’t disappoint anyone,” she said before the show.

Her wishful thinking turned into reality as the Hayti Heritage Center resounded with applause at the end of the show.

“I came to the show because there’s not many black plays available for us to see and to see our culture reflected and our humor reflected,” said Lynda Bell. She also said she wanted to show her support for black artists and the Black Poetry Theatre group.

Ahanu created Black Poetry Theatre to raise cultural awareness and to reimagine traditional art forms, he said. The name comes from its initial production of staged poems, where the first half of the show was in the dark, and the second half was in the light.

“Once you paid attention to just the words, now you could see the identity of them,” Ahanu said.

Black Poetry Theatre takes on social issues both large and small in its productions.

“Our intent is to address community issues, so basically the theater is just another platform for figuring out how to tell stories and address social issues,” Ahanu said of Black Poetry Theatre. “In most of our productions, there’s going to be either really, really obvious and blatant, or subtle social issues.”

From this performance, he said he hopes audience members allowed themselves to be immersed in the experience and take away some of the underlying themes.