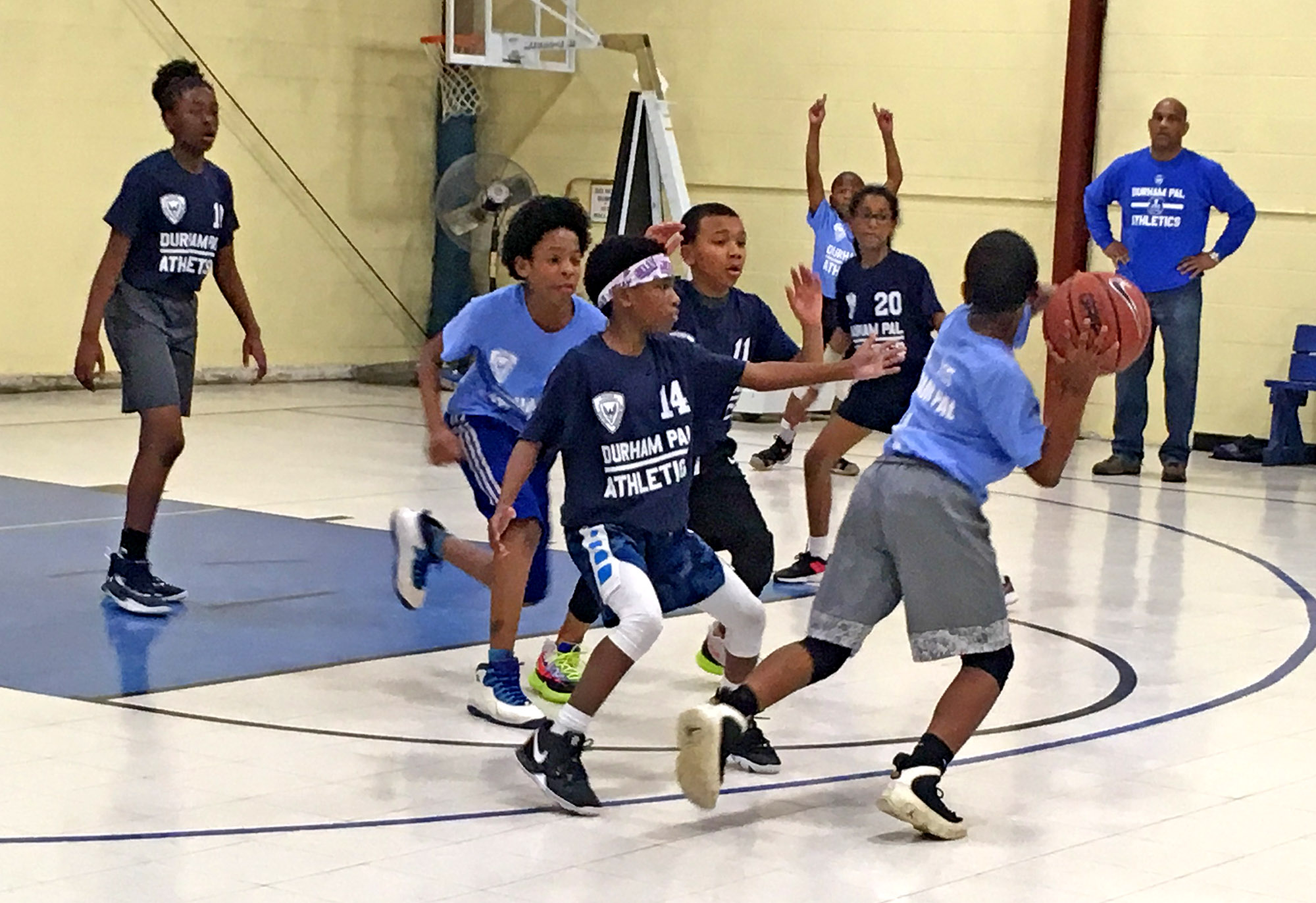 An Eastway Elementary School player looks to pass during during a Durham Police Athletic League game against Pearsontown Elementary at the Holt Athletic Assocation Gym on Feb. 23, 2019 (Staff photo by Jack Frederick).

As the Saturday morning rain pooled in the parking lot, a dozen Durham Police Department squad cars sat parked along the sidewalk leading up to the Holt Athletic Association Gymnasium.

To passersby, the outside view may have signaled something was wrong. But within the yellow walls of the gym, cheers and laughter bubbled over, disarming any thought of danger. After all, this wasn’t the makings of a serious crime; this was basketball.

Kamari said he wants to be a point guard and models his game after two of his favorite players, former Duke star Kyrie Irving and Charlotte native Stephen Curry. Since 2010, the Durham Police Athletic League has given kids like Kamari a chance to play sports at no cost.

“We’ve got teams from citywide,” said Officer John Suitt Jr., coordinator for the DPAL basketball league. “We go out from as far as Hope Valley Elementary, to Holloway Street to Pearsontown, so we’ve got the whole city involved in it.”

Nine years ago, the City of Durham brought the program in as a way to build trust and support between the Durham Police Department and the communities in the area. This year, more than 260 players from 20 different local elementary schools signed up for the six-week season, Suitt said.

During the second week of Saturday games on Feb. 23, fans packed both sides of the royal blue wooden bleachers. Out on the court, third, fourth and fifth-graders dribbled the ball semi-confidently, while their families belted out support from the stands. For some of the players, this season is their first exposure to the game.

In one way or another, every player in the league will interact with law enforcement officers through basketball. Officers coach some of the teams, while teachers at each respective school run others. Off the court, though, officers in uniform and off-duty have a presence, too.

Off-duty officers serve as scorekeepers, and many of the other volunteers at games are affiliated with the Durham Police Department. While the games go on, several police officers manned the concession stand, handing out Dunkin’ Donuts to small children who aren’t yet old enough to play. The presence of officers isn’t overbearing, but it’s meant to make all of their faces more familiar.

“I don’t know if they know the police is involved in it,” said Koketa Ruffin, Kamari’s mother. “All they know is they want to play.”

‘Not all police officers are bad’

People of color are much less likely than whites to express confidence in their local police. In a 2017 Pew Research study, just three in 10 black Americans expressed “warm attitudes” about law enforcement.

That data is relevant for the City of Durham, which reported that about 49 percent of county residents are non-white, as of July 2016. That means, like much of the country, a sizeable segment of Durham residents may not trust — or may even fear — their local police officers.

Through programs like the DPAL, the Durham Police Department fights against that national trend, gaining more confidence from its fellow residents. Sgt. Jessica Butler, supervisor of DPAL programs, said forming new bonds has proven to be beneficial for both parties, who meet each other on common ground for something fun.

“Sometimes in public service, we often see people at their worst over and over and over again,” Butler said. “This gives officers and the community an opportunity to engage with each other in a very positive way.”

In addition to basketball for children and teens, the DPAL offers leagues for soccer, baseball, golf and track, Butler said — with a variety of programs aimed to strengthen the relationship between law enforcement officers and the community. The organization is also looking to expand into non-athletic activities and recently began hosting pop-up events in conjunction with Triangle Ultimate.

Butler noted early on, because interactions between residents and officers often occur only when something goes wrong, some parents hesitated to participate in the league in its early days.

But since then, the program has garnered a reputation for being something worth trusting. Parents who sign their kids up understand the value of not only the sports, but also learning that police officers are people, too.

“I think being that there’s a lot of negativity in the media about police officers, it gives them a chance to get to know the police officers in Durham,” said Natasha Snell, whose son, Jared Snell, plays for Pearsontown Elementary School.

On the court, officers become familiar — not figures in dark uniforms patrolling through neighborhoods and arresting people who have committed crimes. Officer Suitt said when he showed up wearing Durham Police Department-issued gear before the first game, players were surprised to find out he is a cop. He didn’t fit their understanding of what a police officer is.

“That’s what we want,” Suitt said. “We want them to know this is not just us, this is our job.”

Through athletics, the league aims to normalize relationships between children and the police officers they’ll likely interact with for the rest of their lives.

“It’s good to catch the kids early and developing bonds and relationships with them because it’s their community, so they’re going to be around them,” said Adric Hudson, whose daughter plays for Pearsontown. “It’s good to have that relationship and that bond outside of seeing them in uniforms and everything.”

While local police officers can’t do anything to influence the national perception of their occupation, they can work toward making residents feel safe around them.

“Not all police officers are bad, even though sometimes there are unfortunate circumstances that are outside of our control outside of the city of Durham,” Butler said. “But here we’re trying to make a difference.”

‘Sports brought us together’

While the league has goals far beyond just basketball, players enjoy the game for far less serious reasons. Several parents believe their children might not even know the underlying reasons so many police officers are involved.

Out on the court, elementary schoolers get to imitate the game of their favorite NBA players. They shoot the ball and run the floor, all with a crowd of their family members on the sidelines cheering them on.

“I like playing and having fun,” said Jatavion Spears Bowman, a fourth-grader at Eastway. 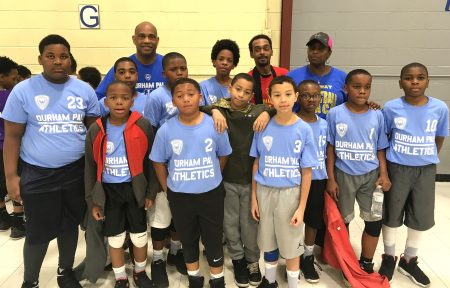 Players from the Eastway Elementary DPAL team posed after their game. The team is coached by Nisha Watson (back right), a physical education teach at the school (Staff photo by Jack Frederick).

Jatavion’s favorite player right now is Kyrie Irving, “because he can shoot.” Coincidentally, Jatavion also loves to shoot and considers it the best part of his game — something Irving does as well.

The game is meant to be a fun experience, something the up-and-coming elementary schoolers will remember later in life.

Officer Suitt grew up playing basketball in his neighborhood with other kids his age. Playing sports was where he met most of his friends and why he rushed home after school to complete his homework in time to play basketball in the backyard.

“I didn’t know a lot of people growing up until I met them on our basketball court,” Suitt said. “Sports brought us together.”

Now that he has grown up to be a police officer, he hopes to extend that same joy to kids in his community, in an attempt to bring other people together. He has a passion for his own involvement in the DPAL because of how much basketball changed his own life.

For him, the attendance every week has solidified that the DPAL is making a difference for all kinds of residents.

Even if the players don’t realize how much the games just might influence their lives later, those the most heavily involved see just how important it is for the next generation of Durham.

Jack Frederick, a UNC-CH senior majoring in journalism and American History, is from Lumberton. This semester he is serving as the sports editor of the Durham VOICE.