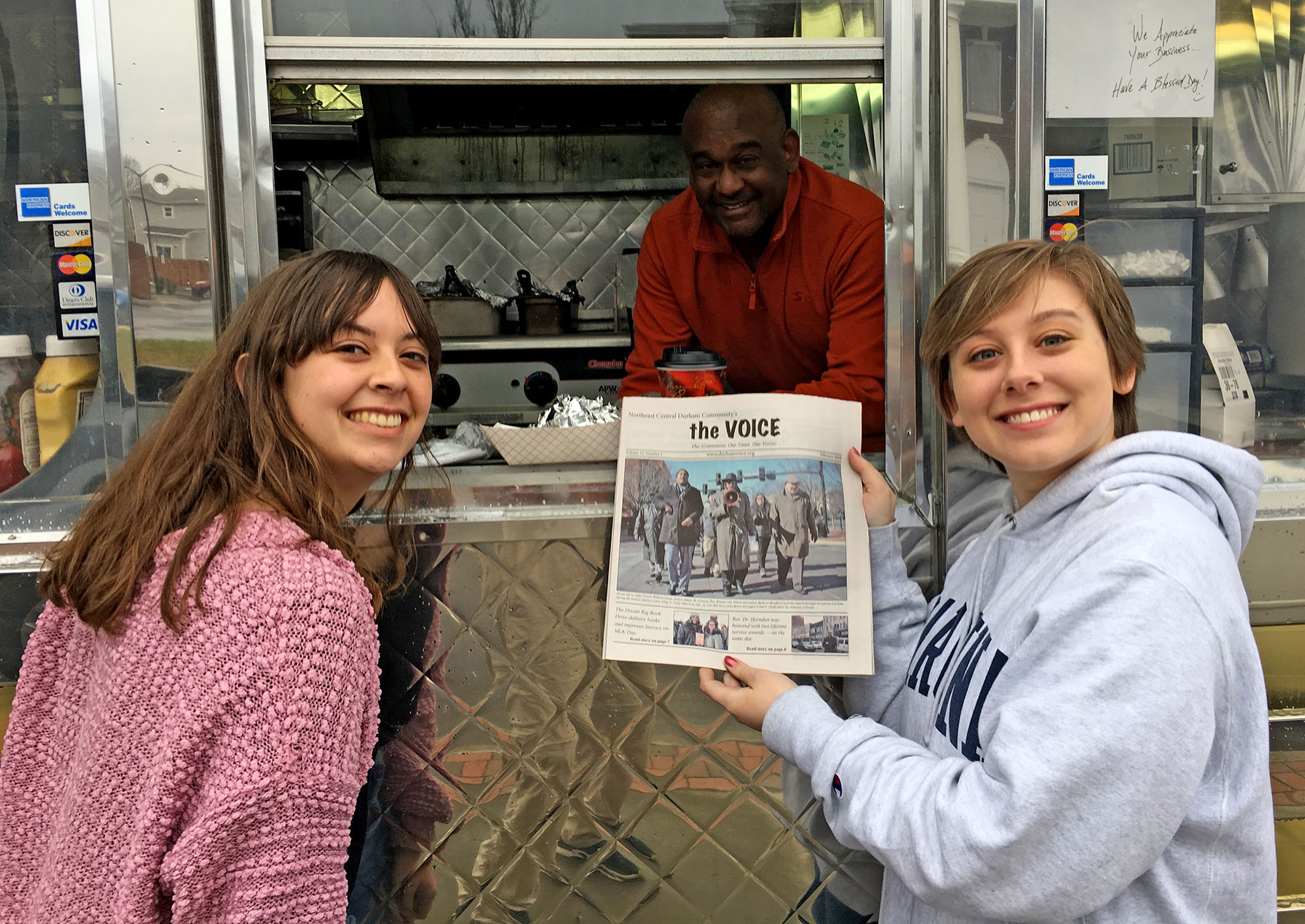 Staff writers, left to right, Hannah McClellan and Spencer Carney hand-deliver the latest print edition of the Durham VOICE to James “Bucky” Gardner, owner of Holy Smokes Rib Shack at his food trailer on Angier Avenue during delivery day, Friday, Feb. 22. All deliveries are done by VOICE staffers as a part of their curriculum. The VOICE has a circulation of 2,000 and is available at 60 drop-spots throughout central Durham. (Staff photo by Jock Lauterer)

Whenever my family and I visit my dad’s hometown, we always make sure to do what we call the “Old Homes” tour, where we drive around and see the houses that my dad and his siblings grew up in.

This tour also includes us driving his old paper delivery route. He points out the houses that would tip for delivery, houses that had dogs and houses where the owners weren’t very friendly and that he’d try to avoid beyond doing his job. We ride in our car down hills he used to fly down on his bicycle, and up hills that he complains about still whenever we get to them. After every tour, he holds up his hands, as if we look hard enough we can still see the ink that painted them black by the end of his route.

I had the honor of helping to deliver the first edition of the Durham VOICE newspaper recently. It was quite a bit different than the way my dad always describes it, which probably has to do that I didn’t have to bike up snowy hills or carry a bag with papers in it, and that I got to ride in a car and had someone else there to help.

Since I sat in the back seat, my primary job was to count out bundles of papers from the huge stack next to me. My professor, Jock Lauterer, drove, while my classmate Hannah McClellan helped by running the bundles into the delivery locations. If no one was home to accept the delivery, we tied them together with rubber bands and tucked them where they could be easily seen and reached but would be out of the rain. If someone was there, we introduced ourselves, told them what we were delivering, and left a stack wherever they said.

Being a reporter is fun. People want to be in the paper, to know that their voices are being heard, that someone is listening. I hadn’t expected newspaper delivering to be just as much fun.

While many of the drop locations hadn’t been covered in this version of the VOICE, most of the people were still thrilled to have copies of the paper for distribution. At one location, I went in to find someone to give the papers to, and one of the workers stopped me before I’d made it three steps past the door when he saw what I was carrying and told me right where to put it. Before I left, he’d already picked up a copy to take home.

When we stopped by JC’s Kitchen to drop off another stack, Hannah and I went in together. The lady who greeted us was already smiling, and when we gave her the papers she told us to remember she wanted them next time, too.

Another drop-off was at the Family Food Mart, which was covered for the first edition of the VOICE. We all went inside to give Steve Abuodeh, the owner, some papers, and when we showed him the article about him, he grinned and started showing another customer in the store.

I’ve been worrying lately that maybe I’m not actually cut out to be a reporter. There are so many people out there who deserve to tell their stories and have them be heard. After delivering papers, I’m not worried anymore. Why? Because it showed me that my work matters to people, even if I’m not the greatest reporter ever yet.

When we finally finished our deliveries, the sleeves of my hoodie were black, as were my hands, which smelled like newspaper. There were smudges of ink on my face, and the water was dark when I washed it all off later. Before I did, though, I made sure to send a picture to my dad. He called, and we laughed about it, then started comparing our delivery experiences. I can’t wait to sign up for the next delivery day. I wouldn’t miss it for the world.