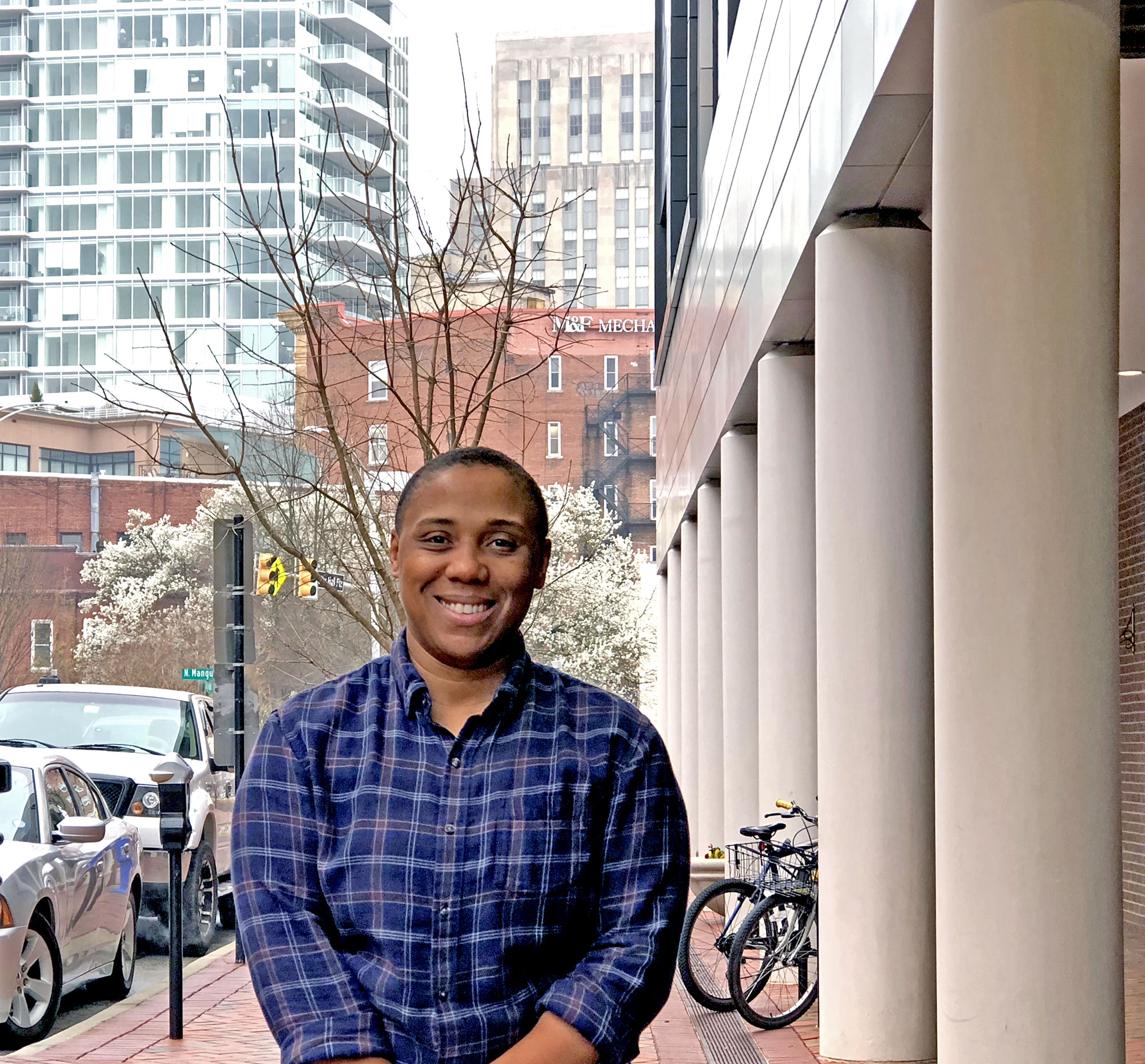 Durham City Councilwoman Vernetta Alston outside her office at City Hall. “It’s a job that comes with tremendous responsibility, and fortunately this is an organization that is full of talented people who are really to take up the challenges that this work comes with and I’ve been very excited and pleased and motivated to do this job,” she said. (Staff photo by Hannah McClellan)

Following the cancellation of classes and a Feb. 8 Black History Month event at which Durham City Councilwoman Vernetta Alston was invited to speak, Immaculata Catholic School reinvented Alston to speak in March.

Alston was one of six openly LGBTQ candidates in North Carolina elected to office in 2017. She is also an alumna of Immaculata, which serves students from pre-K through eighth grade.

“It was understandably disappointing, and I felt more disappointed for the students and folks at the school who had developed the programming for that morning and had it all cancelled,” she said. “It just felt like an extreme reaction to what I understood to be the disagreement or fears of a very small group of people.”

Alston spoke at Immaculate Conception Catholic Church on March 5 following a presentation of posters Immaculata students made about influential African-American women. Alston said the evening event was well-attended by students and community members, and that she was reminded how much the Durham community advocates for what it believes in.

Durham Mayor Steve Schewel said he was glad Alston was able to speak and that so many people at Immaculata advocated for her to be able to do so.

“It was really important to that community and those families that she be able to speak, and I was really glad that it worked out as it did,” he said. “I think we all could learn something from the generous and graceful way in which Vernetta approached the controversy. She was very firm in her stance that she should be able to speak as she was invited to do, but she was also very understanding of the various concerns and worked with the church to make sure she could speak.”

The February event’s cancellation garnered widespread media attention, with many people criticizing the school’s actions. While Alston still doesn’t know who specifically expressed concerns over her presence, she said she was disappointed Immaculata encountered such negative attention.

“I do feel, and I’ve said this all along, that the folks at that school and in that church embrace inclusivity and are caring people and loving people and welcoming people,” she said, “and who would, in their everyday lives, be supportive of not only myself, but all LGBTQ folks here in Durham.”

At the time of the cancellation, Immaculata’s African American Heritage Committee, which organized the Black History Month event, issued a statement criticizing the school’s decision.

“The public story has centered on the cancellation of all school classes and activities on Friday in light of protest threats made by outside religious extremists,” the statement read. “While the safety of our students is paramount, that focus is misplaced. The real issue here is a decision to cancel the speaking engagement of an accomplished, well-respected, local black female leader who also happens to be an alumna of our school … and how that decision does not reconcile with our community values.”

In a letter, Christopher VanHaight, pastor of Immaculate Conception, told parents the event and school day were being cancelled due to the threat of groups demonstrating against Alston coming to speak. He expressed regret over the situation, but maintained he must protect student safety. Immaculata did not respond with a comment regarding Alston’s recent visit at the time of publication.

Prior to being elected to the city council in 2017, Alston worked as an attorney at the Center for Death Penalty Litigation. As an elected official during the Trump administration, Alston said she and other council members recognize the importance of standing against some of the “really horrific policies” President Donald Trump has adopted.

“Being in this position, I think my representation as a LGBTQ person on council has mattered – I hope it’s mattered –  to folks in the community, and has also given me an opportunity to find ways within the city as an organization to advocate for more protections and more equal treatment of folks in the LGBTQ community,” she said.

Alston’s campaign prioritized issues surrounding immigrant communities, policing, economic development, affordable housing and LGBTQ equality. As a black, openly gay woman, Alston said issues around inclusion of people of color and the LGBTQ community strike home for her the most, but she ultimately just cares about doing good work.

“I’m passionate about just trying to do good work and trying to live every day with a real purpose, and kind of wanting to make a difference,” she said. “There’s no one issue that I feel most passionate about, I just want to do good work across the board and just feel confident that’s what I’m putting out to folks in Durham. My goal is to work hard at this job right now, in hopes that by 2021 folks say, ‘We appreciate the job you’ve done and want you to stay.’”

Schewel, who has appointed Alston to eight city council committees, applauded the way she handled the rescinding of her invitation to speak at Immaculata, as well as her work for all of Durham.

“She’s a person of tremendous integrity; she’s very wise,” he said. “She’s a person who listens well and reserves judgment until she’s really listened to everybody and been able to give a thoughtful response, and I really admire that.”

In response to the media attention surrounding the cancellation of the Black History Month event, Alston said she hopes students at Immaculata will ultimately learn from it.

“I hope the students learn the same thing – in that if you don’t agree with something, if you don’t like a decision someone’s made, if you feel it’s not consistent with your values, then you should stand up and say something,” she said.