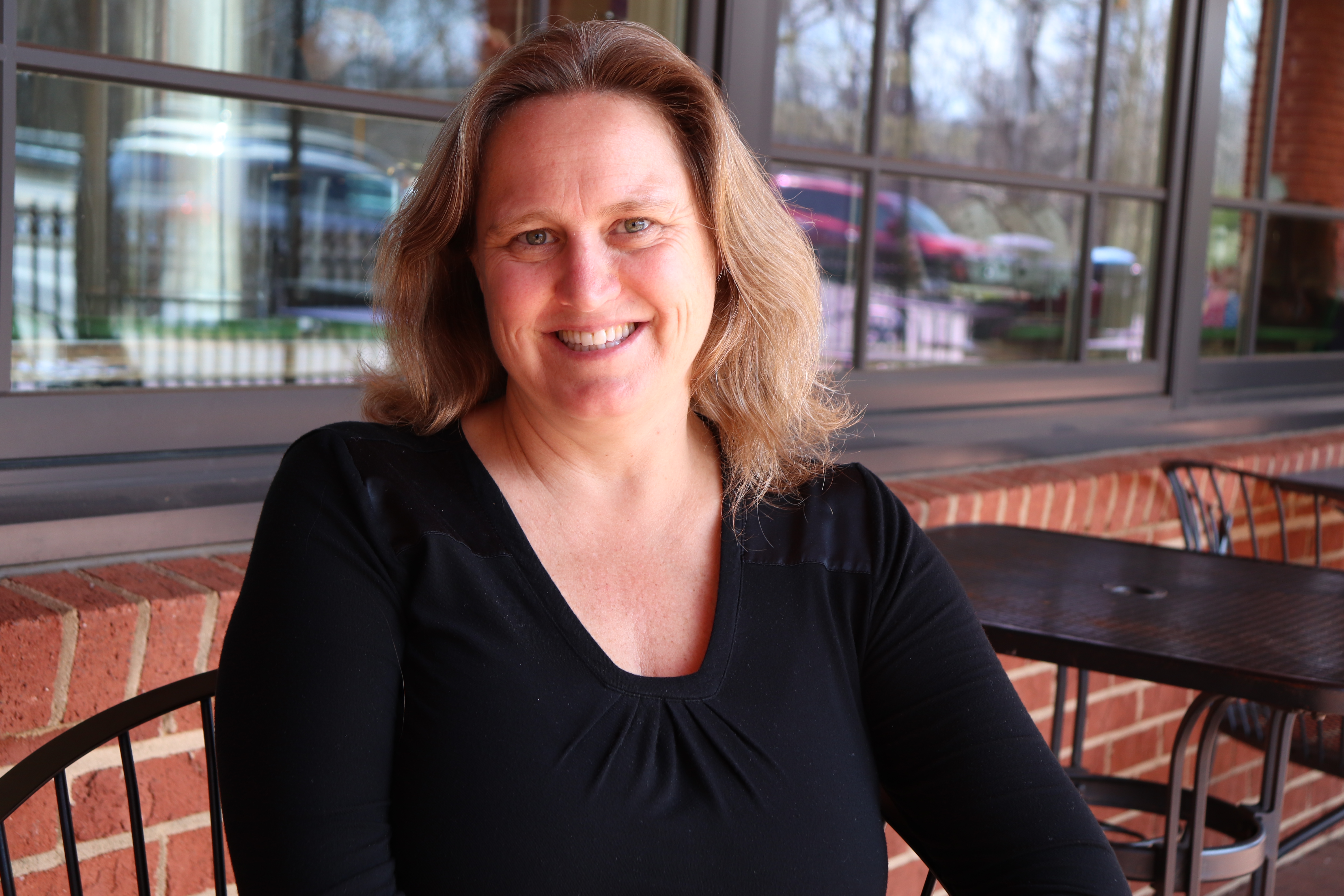 Grace Beeler is an ESL instructor at Durham Technical Community College. She draws inspiration from her students in her documentary film series about immigrants in the Triangle. (Photo by Samantha Perry)

When Grace Beeler began teaching English as a second language, she was shocked by the stories refugees had to share.

“If everyday Americans could hear the stories that I hear at work they would have a lot more compassion for refugees,” Beeler said. “They would understand why they need to come here, why we should be helping them, why they are productive members of society, why we want to have them here.”

Beeler and a local group of filmmakers hope to bring to light the challenges refugees face in the Triangle with their film “The Chance to Live.”

“The Chance to Live” was screened at Durham Technical Community College on March 19. The film highlights the ongoing Colombian conflicts, which displaces over 200,000 people each year.

The 11-minute film features a family living in the Triangle that sought asylum in the United States after facing threats of violence in Colombia. The father of the family, once a pastor, shares the story of how quickly he went from being a respected leader of a church to receiving death threats from a paramilitary group.

While the father narrates, the film shows a day in the life of the family, including cooking meals, attending church and practicing instruments with their children.

The film paints a picture of how refugee families rebuild their lives, despite internalizing emotional trauma and facing legislative obstacles.

The film, directed by Beeler as well as Kellen Smith and Lívia Campos de Menezes, is the first in a series of stories about refugees from a variety of countries and backgrounds. Different local filmmakers and musicians will be used for each documentary, allowing for artistic styles as diverse as the Triangle itself. 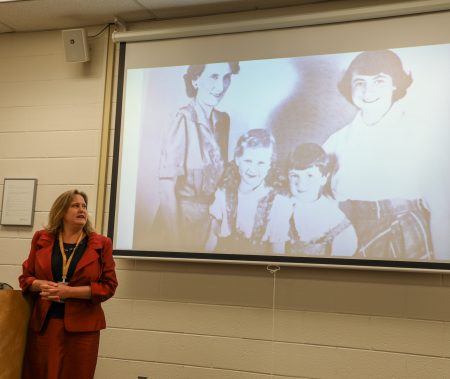 Beeler tells the story of her own families experience escaping from violence and living in a refugee camp. (Photo by Durham Tech)

Beeler credits her passion for working with refugees to her own family’s experience. Beeler’s mother was born in a refugee camp in Switzerland. Her grandparents, who lived in Vienna during World War II, escaped after Austria was taken over by Nazi Germany.

When Beeler’s grandfather was taken on a train to a concentration camp, her grandmother followed him and convinced a friend to open a door for them to jump from the moving train. Without passports, they had to be smuggled across Austria to try to cross into Switzerland.

“The Swiss weren’t allowing anyone into Switzerland,” Beeler said. “They were deporting everybody back to their deaths. My grandmother got shot by Swiss guards in the leg.”

After crossing a freezing cold river and surviving in the woods for eight days, they were eventually allowed to enter a refugee camp by Paul Grüninger, a commander of the St. Gallen police. Grüninger was later fired from his position and died in poverty, but is now considered a hero.

“I think it’s important to point out that what is right isn’t always what is legal,” Beeler said. “And that history looks at things differently.”

Beeler never thought she would become an amateur filmmaker. Prior to coming to North Carolina, she taught ESL courses in New York and Connecticut. She also worked in deportation defense for farmworkers in California.

While teaching English to students, she often asked them about their childhood to practice past tense. Students would often open up about escaping violence, losing family members and the hardships they faced on their way to the United States.

Beeler began attending North Carolina State University, where she studied International Studies with a focus on water and sanitation. Inspired by her research and a child who died drinking contaminated water at a refugee camp, Beeler made her first documentary about a simplified sewer system invented in Brazil.

She hoped to spread the knowledge about this technology into Latin America and around the world but faced difficulties because the film was in Portuguese. Recently, she hired a professional editor to help with subtitles, and the movie will be shortened and distributed to over 200 Brazilian TV stations.

As she finished her master’s degree, Beeler began interning at the immigration office of Church World Service (CWS), a faith-based humanitarian organization. The group gave her connections in the immigrant community and inspired her to continue volunteering after her internship.

THE FUTURE OF THE FILM SERIES

After graduation, Beeler began teaching ESL at Durham Technical Community College. It was around this time that she met Kellen Smith, another amateur filmmaker who had dreams of telling the stories of immigrants.

With Smith’s knowledge of the film industry and Beeler’s connection to the immigrant community, they set out to search for families that would be interested in telling their stories.

Beeler said finding the families was difficult because many work long hours to make ends meet.

“When you’re a refugee, you get three months of support, and then you’re on your own,” Beeler said.

In other states, such as New York, refugees get one year of support. 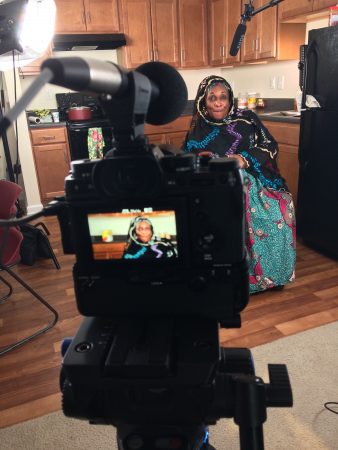 Miriam, one of the subjects of Beeler’s next documentary, prepares to share her story. (Photo by Grace Beeler)

The next film will feature two women from the Democratic Republic of the Congo who have been separated from their families.

One of the women, Mariam, was kidnapped by rebels with her family. Her husband and son were never seen again, and her daughter was taken as a wife. Mariam was stabbed with a bayonet and left bedridden until she was abandoned on the street. Luckily, she was found and brought to the hospital.

Mariam is now in the United States and recently found her daughter on Facebook. Sadly, they will be unable to visit each other due to the current laws.

“Almost everybody has family members that are still in danger, and they need them to be able to come, but right now they can’t because everything is stopped,” Beeler said.

Because Mariam now uses a wheelchair, she is supported by an 18-year-old family member, who wants to attend Durham Tech, but is unable due to the many hours she needs to work to pay their rent.

Mariam wants her daughter to come to the United States to work, but it is not an option under the current administration according to Beeler.

“Before Trump came to office and started slowing everything down, those channels existed,” Beeler said. “But they’re blocked.”

Beeler said that CWS hopes to use shortened versions of her films to show local and national politicians and to advocate for better legislation.

The film will be screened by the Jewish Federation of Durham-Chapel Hill at the Charlotte and Dick Levin Jewish Community Center on April 7 at 7 p.m. There will also be a fundraiser for future films at Flush Fest, a homemade music and film festival in Hillsborough on June 15.

Samantha Perry, a UNC-CH senior majoring in journalism, is from Dover-Foxcroft, Maine, and serving this semester as co-editor of the Durham VOICE.