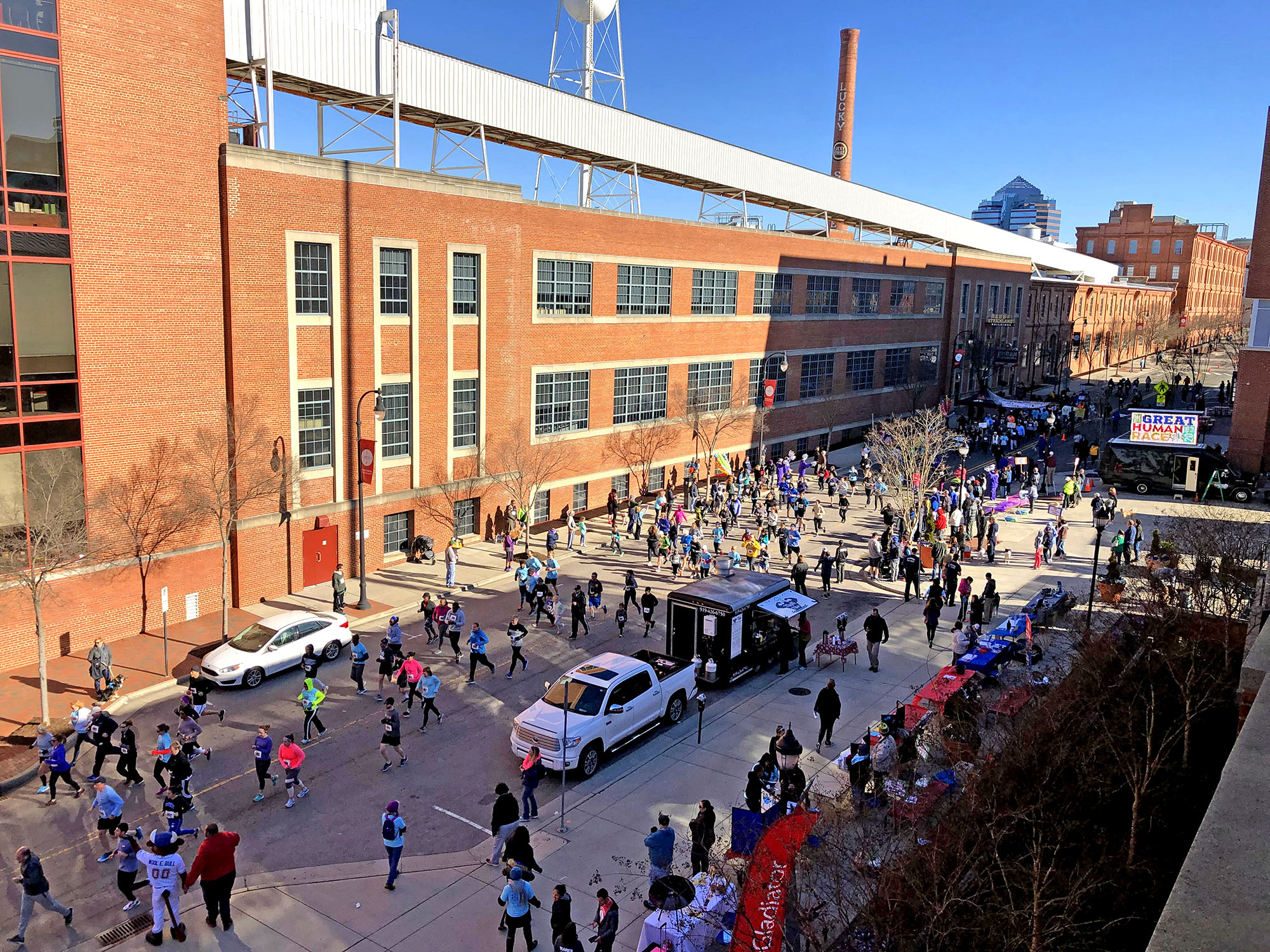 The Great Human Race is a 5K run hosted by the Triangle Nonprofit & Volunteer Leadership Center. It's raised nearly $3 million for Triangle nonprofits since 1996. (Staff photo by Johnny Sobczak)

It’s the crisp Saturday morning of March 23, and nonprofit groups are slowly setting up tables on the sidewalk outside of the Durham Bulls Athletic Park for the 24th annual Great Human Race, hosted by the Triangle Nonprofit & Volunteer Leadership Center (TNVLC).

Many of the tables are covered in posters, pamphlets and brochures to be handed out to members of the public. For most of these organizations, this fundraiser is the best opportunity they have all year to make their missions known. One of these tables has a secret weapon to lure in passersby: a pen full of puppies. 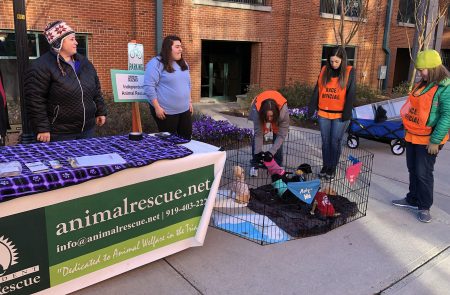 Rachel Simon (second from left) greets race officials that have stopped to see her foster puppies. She is representing Independent Animal Rescue, the most popular nonprofit at the event, raising over $16,000. (Staff photo by Johnny Sobczak)

Rachel Simon, the volunteer in charge of the table for Independent Animal Rescue, has been with the group for three years. She smiles and greets each person that comes up, answering questions about the four Labrador puppies that are sitting in the pen. Simon is fostering all of them until they are adopted.

Simon says she was inspired to get involved while living in Washington, D.C., where she adopted a foster dog from North Carolina. After moving to North Carolina, where (according to Psychology Today) animal shelters euthanize more animals than any other state, she felt inspired to do even more. In her first week of volunteering for the group, she fostered three dogs. Now that she is representing Independent Animal Rescue (IAR) at the Great Human Race, Simon says she realizes just how significant the event really is.

“I’ve learned a lot more than in previous years, where I would just show up. Not only am I learning that it brings in $20,000 for IAR, which is huge but the exposure it gets for our foster dogs,” Simon says. “I’ve already gotten three applications just from this event. And just putting our name out there is a really great opportunity for us.” 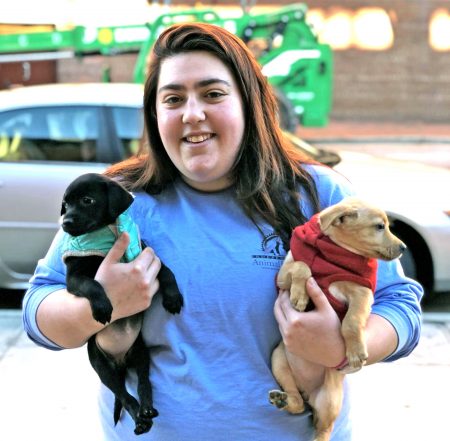 Rachel Simon of Independent Animal Rescue (IAR) with two of the Labrador puppies she is currently fostering. Simon has been volunteering with IAR for three years. (Staff photo by Johnny Sobczak)

IAR raises more funds than any other nonprofit at the annual event, including $22,000 in 2018, says Simon.

This type of nonprofit success and volunteerism is the entire mission of TNVLC. Created in 1972, the group works to assist and strengthen nonprofits in the area and also provides student opportunities. The Great Human Race alone has raised nearly $3 million since the inaugural run in 1996.

The race serves as the largest collaborative fundraising event in the Triangle and benefits hundreds of nonprofits, combining a fundraising platform with a 5K run and a community walk. TNVLC helps recruit runners, and it facilitates runner donations to the nonprofits. This year, nearly 60 nonprofits raised funds through the race.

The day of the 24th annual Great Human Race holds extra special meaning for Kim Shaw, executive director for TNVLC. It’s her ninth anniversary of working at the center. Shaw highlights the importance of the race for Triangle nonprofits.

“For some of them, it’s their largest fundraiser of the year, so it’s critical for them. For others, it’s an important fundraiser, but there are three things that are benefits for the agencies,” Shaw says. “They raise money, but they also raise awareness about their organization for the community. And they get their volunteers all galvanized. Money is part of it, but it’s not everything.” 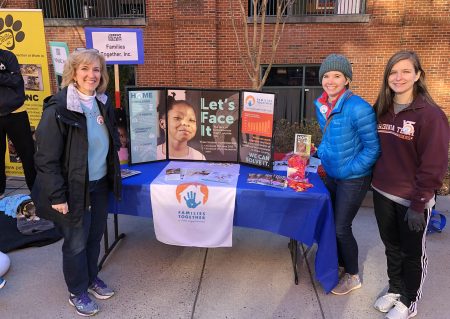 Catharine Staley (left), daughter Sarah Arthur (second from right) and friend Rachel Corvin (far right). Staley has served as a board member for Families Together for 15 years, but this is her first year participating at the Great Human Race. (Staff photo by Johnny Sobczak)

That sentiment was echoed by Catharine Staley, bundled up in a sweater and big coat trying to stay warm. Staley, her daughter, Sarah Arthur, and family friend Rachel Corvin, stood in front of the table for Families Together. The group works to move families from homelessness to homes through “mentoring, housing support and connection to community resources.”

Families Together has been operating for 39 years, and Staley joined as a board member in 2004. But this is the first time that the group has made an appearance at the Great Human Race. The decision was partly motivated by the dramatic increase in student homelessness, which has climbed 80 percent since 2010 in Wake County and 37 percent in the last two years. While Wake County is where the group focuses most of its efforts, they see the race as an opportunity to branch out and boost name recognition rather than focusing on raising funds, Staley says.

For many of the nonprofits, whether it be Families Together or Independent Animal Rescue, an event like the Great Human Race can be the extra push they need to make a very real difference in someone’s life.