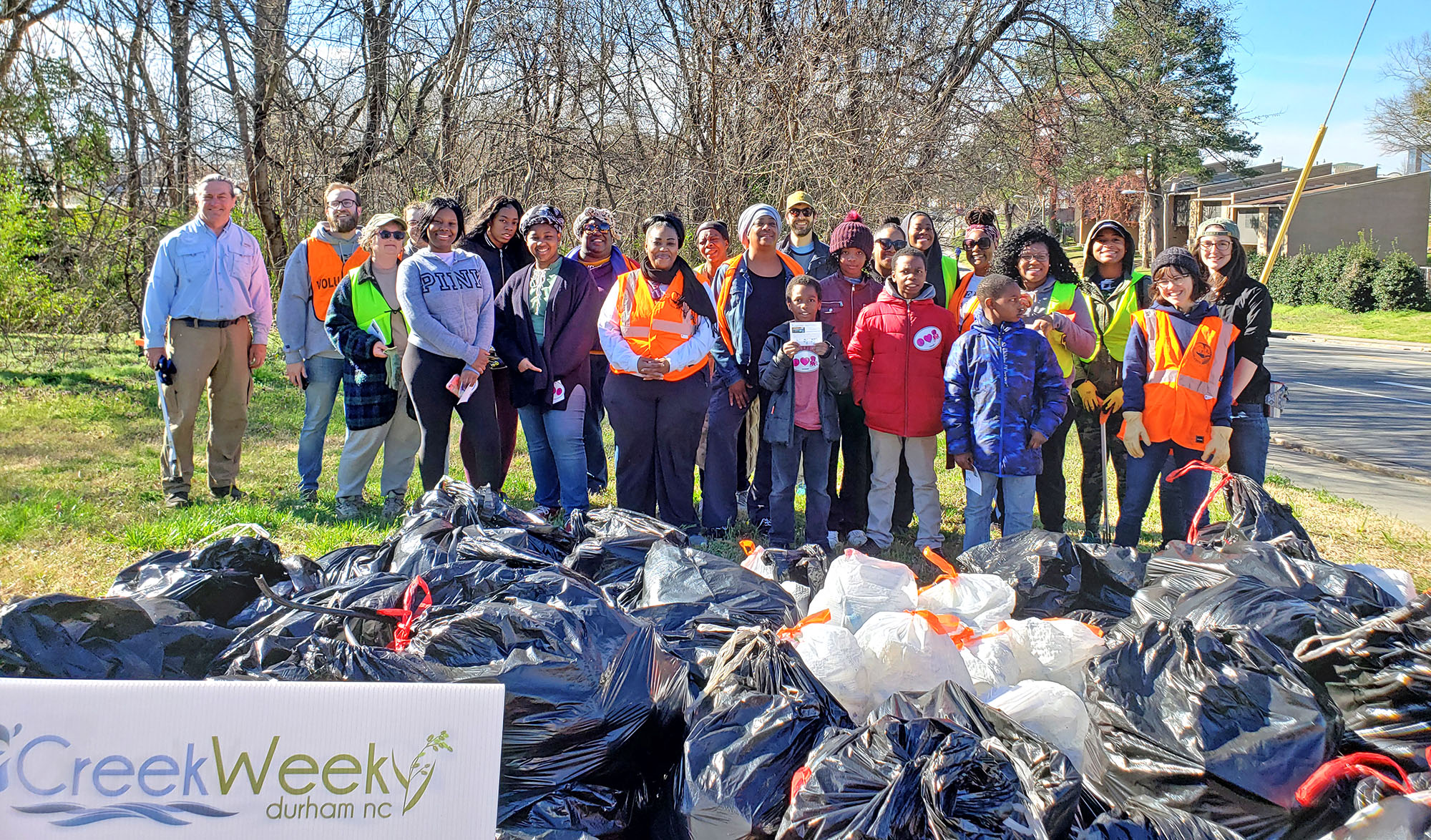 As a 9-year-old, Kriddie Whitmore took a field trip to Ellerbe Creek that sparked her interest in preserving and removing invasive plants.

She often relives this fond memory by preserving areas near her childhood home as a nature preserve steward with the Ellerbe Creek Watershed Association (ECWA).

“It’s a very volunteer-centered organization, and they always have these opportunities,” Whitmore said.

The ECWA is a participating site for the Parks with Purpose project, an initiative of The Conversation Fund. Its work in Durham seeks to revitalize urban core areas through land protection, water management, education and stewardship programs. The ECWA also hosts community engagement events, like workshops, nature hikes, cleanups and the Family Explorers Club.

“A big thing that we’ve realized by owning lands down by the creek is that in an urban area, they’re kind of forgotten and trashed,” said Chris Dreps, executive director of ECWA. “We realized that problem actually starts up here.”

The ECWA was founded in 1999 by a botanist and his wife, a professor at Duke University.

“He was walking down by this abandoned, trashed-out part of Ellerbe Creek that was down near the neighborhood in Watts Hospital-Hillandale,” Dreps said about the co-founder. “He started to see really cool stuff, started paying attention to it and wondered who owned the place.”

The co-founder formed a group of community members that started pulling weeds and picking up trash around the creek.

Because the creek was located near the hospital, it was not long before Dr. Barbara Newborg noticed the group. After learning that the group was not getting paid for its work, she offered to fund its efforts.

“Before you know it, there was a funder and a donor who was supporting, and the group decided it wanted to protect the land. And it needed to be a nonprofit to do it,” Dreps said.

Today, the ECWA has a full-time staff and multiple funders, including The Conservation Fund. The organization owns and maintains the Beaver Marsh trail and The Rocks, 17 Acre Wood, Pearl Mill and Glennstone nature preserves.

Some of the most densely developed areas of Durham have been built on top or along Ellerbe Creek’s headwaters. Consequently, the creek receives roughly half of the city’s stormwater runoff, making it one of the state’s most polluted creeks since 1998, according to the ECWA website.

“Ever since the beginning of Durham, the only way we’ve been managing water is to pave everything over, put big pipes in the street and run it all to the creek as fast as possible,” Dreps said.

“One of the things we have to do is turn back the clock 100-plus years of mismanaging water, which is a big goal that has to be done over a long period of time,” Dreps said. “We do this work called Creek Smart that we try to educate the community about how we can manage stormwater in our own yards.”

These stormwater management methods include rainwater harvesting, flushing toilets with stormwater and installing green infrastructure, such as rain gardens, parks and trails.

“We do believe that by having green infrastructures that we can reduce the amount of flooding happening in the area,” said Keshi Satterwhite, ECWA community engagement specialist. “We have the ability to reduce urban temperatures.”

Dreps said the ECWA also tries to get people excited about the creek. Every year, the ECWA participates in Creek Week, organized by the City of Durham and other nonprofit organizations. Creek Week includes a weeklong series of events that raise awareness about local urban waterways.

In honor of this year’s Creek Week, the ECWA hosted a community cleanup on Liberty Street on March 16 and a second cleanup for the 17 Acre Wood preserve on March 23.

The ECWA has a successful start to Creek Week with 25 volunteers participating in the Liberty Street Community Cleanup on March 16. (Photo courtesy of the ECWA)

“The Liberty Street cleanup had a very good turnout, and we had 25 people that participated in cleaning up that section of Durham,” Satterwhite said.

For Parker Klinck, 20, volunteering at the 17 Acre Wood community workday is experience for his future career.

“I’m looking to become a park ranger, and working with the ECWA is a great way to help preserve the nature preserves,” Klinck said. “This is my first time, but I know about the good things they do.”

“I started out volunteering and began working with them as a preserve steward,” Whitmore said. “It’s fun to volunteer with the organization because I get to be outside, preserve public spaces and give back to the community.”