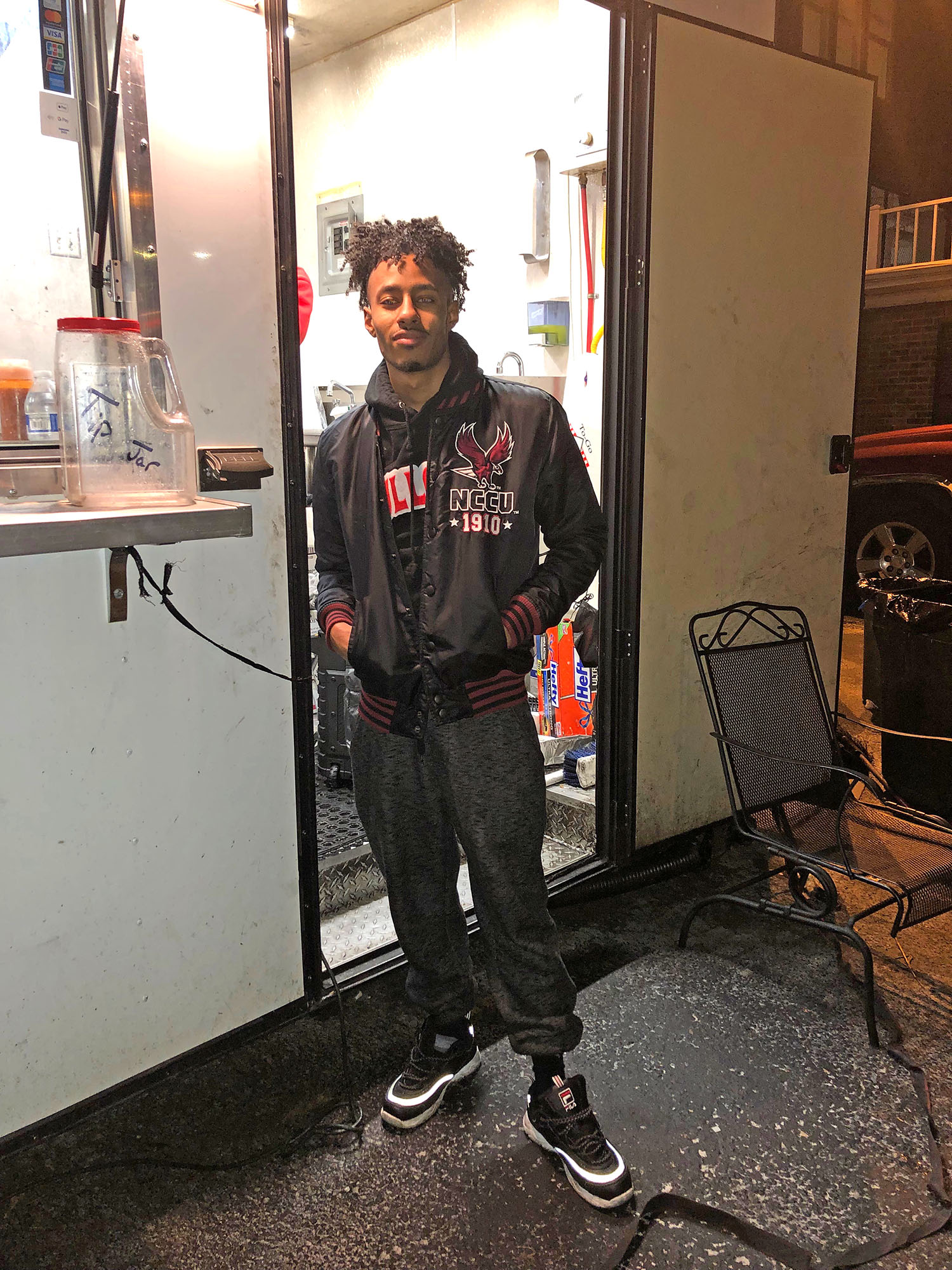 Ian Burris, 22, standing outside of his food truck. (Staff photo by Arianna Swain.

Ian Burris arrived at his food truck a few minutes after opening, ready to get the night started. He was wearing a N.C. Central jacket to stay warm in the cold air. He went over and talked to his staff and dropped off some needed items. Two of his staffers were already getting everything ready to begin their night which includes lots of visits from Duke and NCCU students and high schoolers from Durham and even Chapel Hill who all follow him on social media. 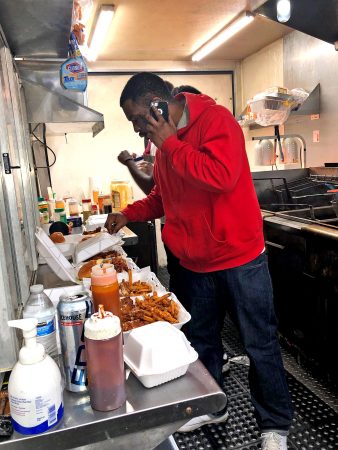 Employees in the truck preparing food for some customers. (Staff photo by Arianna Swain)

Burris graduated from Hillside High School and is a Durham native who grew up with a love of cooking. He started the business out of his parent’s garage in 2016. He only had two deep fryers from Bed Bath and Beyond. Burris cleaned out the garage and brought a new fridge to store the food. He was 19 when he started. He made food, five trays at a time and delivered it himself.

“I always had the idea since I was young,” said Burris. “In high school living here in Durham, food trucks in 2010 got big. The first one I saw was the “Only Burger” one and ever since then I’ve wanted one of my own.”

He hired his first employees a year ago.

“It felt good to hire my own people and I’ve been through a lot of people learning about hourly pay and finding reliable people,’’ said Burris. “It’s nice being a boss though. That’s what I always wanted to do when I was little. I didn’t even know how but I would picture me being the boss when I would just play with my little matchbox cars or build little villages out of Lego.”

Makeva Hedgepeth, 25, is one of Burris’s staff members as well as a chef at Sodexo. He noticed that there was a local job in the area, that Burris was hiring and decided to apply.

“This is a real cool environment. It’s downtown by the bars,” said Hedgepeth. “With it being in Durham, we get a lot of Durham traffic to come and we receive a lot of support from them.” Hedgepeth has been with the business for the last three months.

Allegra Wall, 22, a North Carolina Central University student, found out about the outdoor eatery on social media. She saw someone post a picture of their food and was immediately intrigued. 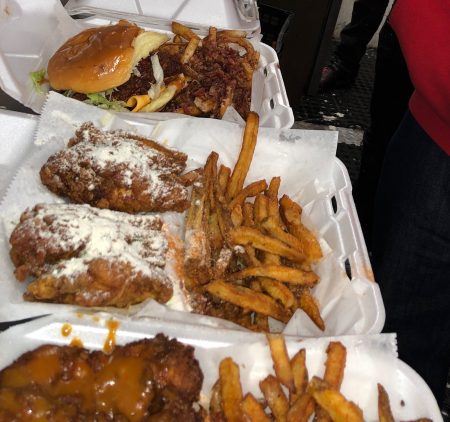 A sample of some the food that they serve. (Staff photo by Arianna Swain)

A year ago, in August was the first time Wall tried the food. To find it she had to follow his Instagram page on social media. Once Burris said he was open the consumers then had to place their order through social media or come to the food truck itself.

If the customer orders through social media they would have to direct message him and tell him their order. After that they have to say how they will pay. Burris or one of his drivers will then go and deliver the food to the address provided by the customer.     “The food is amazing,” said Wall. I would recommend the Hot Honey tray, that’s where you can get chicken tenders, fries, shrimp, burgers or vegan tenders dipped in a mixed sauce he makes. It’s so good.”

“I think it’s good that he’s my age and running his own business. He knows he can appeal to people our age through social media,” Wall said. “Who better to serve a millennial than a millennial.”

Burris plans to extend his business into something much bigger. He plans to open up a bar as well as a cooking camp that involves children in the high schools around Durham. He runs his business independently but, in the future,, he plans to get involved in more community events.

He supports all the colleges in the area and likes to represent his city.

The Dankery opens up every night from 8 p.m. to 3 a.m. at 1007 West Main Street downtown. The social media page for the food truck is Shrimpandpastasdankery on Instagram. The menu is on the page as well as a way for customers to dm their orders.

On March 7, Burris got national attention when NBA star Dwayne Wade stopped by for some wings and posted about it on social media, leaving many Dankery fans thinking that he might need to expand with more trucks and employees soon.

Arianna Swain of Durham is a senior journalism major at N.C. Central University. This fall she is serving as a writer-photographer for the Durham VOICE.