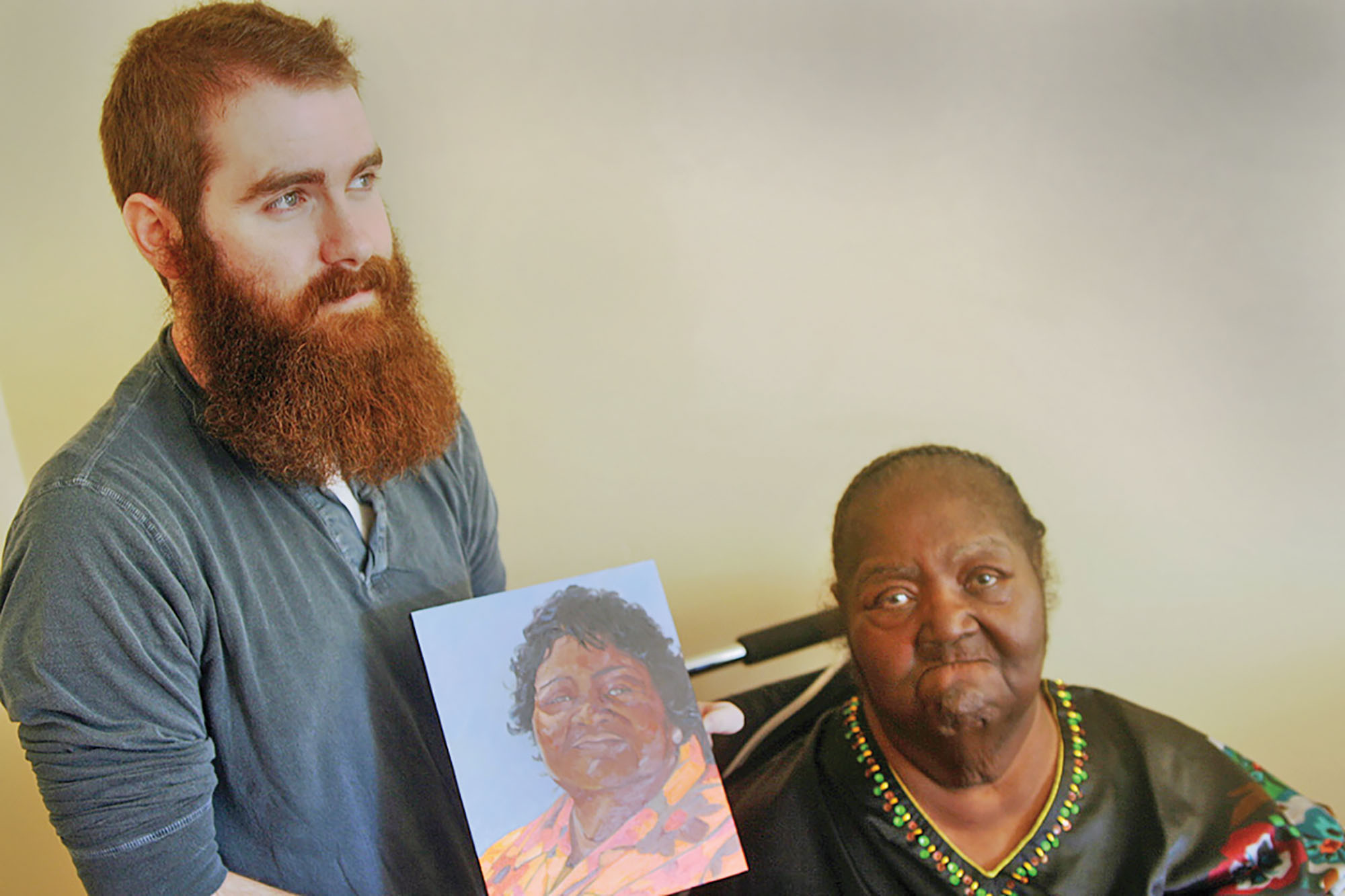 Reprinted from the Durham VOICE’s files from 2012: Ann Atwater, 76, (right) and caregiver Thad Cox discuss Atwater’s recovery and release from the rehabilitation center. Atwater was interviewed for this story by Partners for Youth Opportunity teen writer Sharif Ruebin, who also made this photograph. Atwater, who died at 80 in 2016, is being remembered and honored as the hero in the new motion picture, “The Best of Enemies.” (Photo by Grant Halverson, AP)

Editor’s note: Four years before Ann Atwater’s death in 2016, VOICE teen writer Sharif Ruebin interviewed Atwater at age 76, describing the legendary Durham civil rights activist as a “mama lion.” This story-photo package is reprinted from the May 2012 edition of the Durham VOICE.

Walking into Ann Atwater’s room at Pettigrew Rehabilitation and Health Care center, you might catch her watching Walker, Texas Ranger.

But when she is talking, she relays real life stories.

Atwater is a legend in Durham with a Wikipedia page. She has been described as the “mama lion” of Durham civil rights.

The legend’s life story, though, may not be as well known as her work.

She was born in Columbus County on July 1, 1935, the youngest of nine children. Her father was a sharecropper who taught survival by taking nothing and making something.

Atwater is now 76, and can recall every detail of her first day in Durham more than 60 years ago.

“After a shotgun wedding I was married at 14,” said Atwater. She added that is too young to get married today.

She arrived by bus to meet her husband. She carried half a plate of fried chicken, some water and her first-born child.

She experienced discrimination on her bus ride across the state.

“I wasn’t allowed to go into the ‘white only’ places to eat or sometimes use the bathroom,” said Atwater. “I just ate on the bus.”

Atwater said her dad stressed the Golden Rule ­­– “Do unto others as you would have them do unto you.”

Even though this was her upbringing, people in her life did not always follow this rule.

“My husband left me after I had his second child,” she said. “It was rough for us, but we made it.”

Atwater supported herself and her family by working as a domestic.  She rented her first house for six dollars a week. She would have to put out pots to catch rain from the holes in the roof, and stuffed rags in the wall cracks to keep the cold out.

She also made the tables, chairs and clothes for her children by hand.

“We did not eat balanced meals, but we ate every day,” said Atwater.

In her seven years with Operation Breakthrough, Atwater reached out to Durham residents to teach them to be self-reliant and make the system work for them.

She taught people how to battle landlords and recognize their rights.

Atwater credits this work to her father who taught giving back to community.

“You can’t do this sort of work unless it’s in your heart,” said Atwater.  “On your lips it doesn’t mean anything.”

After the training, Atwater did volunteer work and soon got a job as a social worker paying $8,000 a year.

“I didn’t go to school to know how to be a social worker,” she said. “But I knew how to take care of kids.”

Atwater would talk to parents and win them over by interacting with their children and bringing clothes and furniture.

Eventually she worked to help black Durham residents get food stamps and other government services that were often denied.

Atwater also fought for black equality in the work place.  One time she and others stood on the Pettigrew Street rail tracks to force a train to stop. They were protesting the restriction of blacks working on trains.

“We would set up neighborhood councils to address these community problems,” she said. “Then we pushed for voter registration and peaceful school integration.”

While Atwater protested for integration, she and other activists would be harassed and spat on.

“We were taught to respond with nonviolence,” she said. “I learned to keep my anger inside and burn my ruined dresses.”

Atwater is famous for pushing for integration in the Durham public school system.  She partnered up with Claiborne Paul Ellis, a former KKK member.

Together they fought to integrate Hillside High School.

The story of their relationship is portrayed in Osha Gray Davidson’s book The Best of Enemies.

Although Atwater didn’t favor white people during these times, she was willing to work with them for greater good.

Back then a civil rights activist working with a Klan member, even formerly, was controversial.

Even now Atwater says she doesn’t see color anymore – only problems and people.

“When he died the preacher asked me to do the eulogy,” said Atwater. “I was told I couldn’t sit with the family because it was ‘white only.’”

Atwater said she was told to get up, but the family wanted her to sit with them as family. It was she who told Ellis’ grandchildren what sort of person he was because they never got to know him.

“In the eulogy I talked about his life after he found Christ,” she said.

Atwater, a very religious woman, said she never thought she was changing the world.

“I didn’t think the work I did would amount to a hill of beans,” she said. “I was doing God’s work.”

To support herself these days she speaks to various groups about her adventures.

In January, Atwater broke her leg in two places and fractured her back. She is currently getting well. Unsure of when she’s being discharged, she thinks once she can put weight on her foot she could leave.

In her room full of flowers and sunlight, Atwater talks of missing her dog, Teddy, and going to church.

Thad Cox is Atwater’s “son.” He spends time with the “Mama Lion” and helps her in daily life.

Cox said looking back on the atmosphere Atwater rose from, “You can see how she was forged in those fires.”

He said she brought the movement to the forefront and made history.

“They call her ‘Rough House Annie,’” he said. “But I haven’t seen the rough house.”

Cox said Atwater had “mellowed” out but still has concern for neighbors, family and community. The VOICE asked him what he thinks of her life’s example.

He said, “When I think of salt of the earth, I think Ann.”