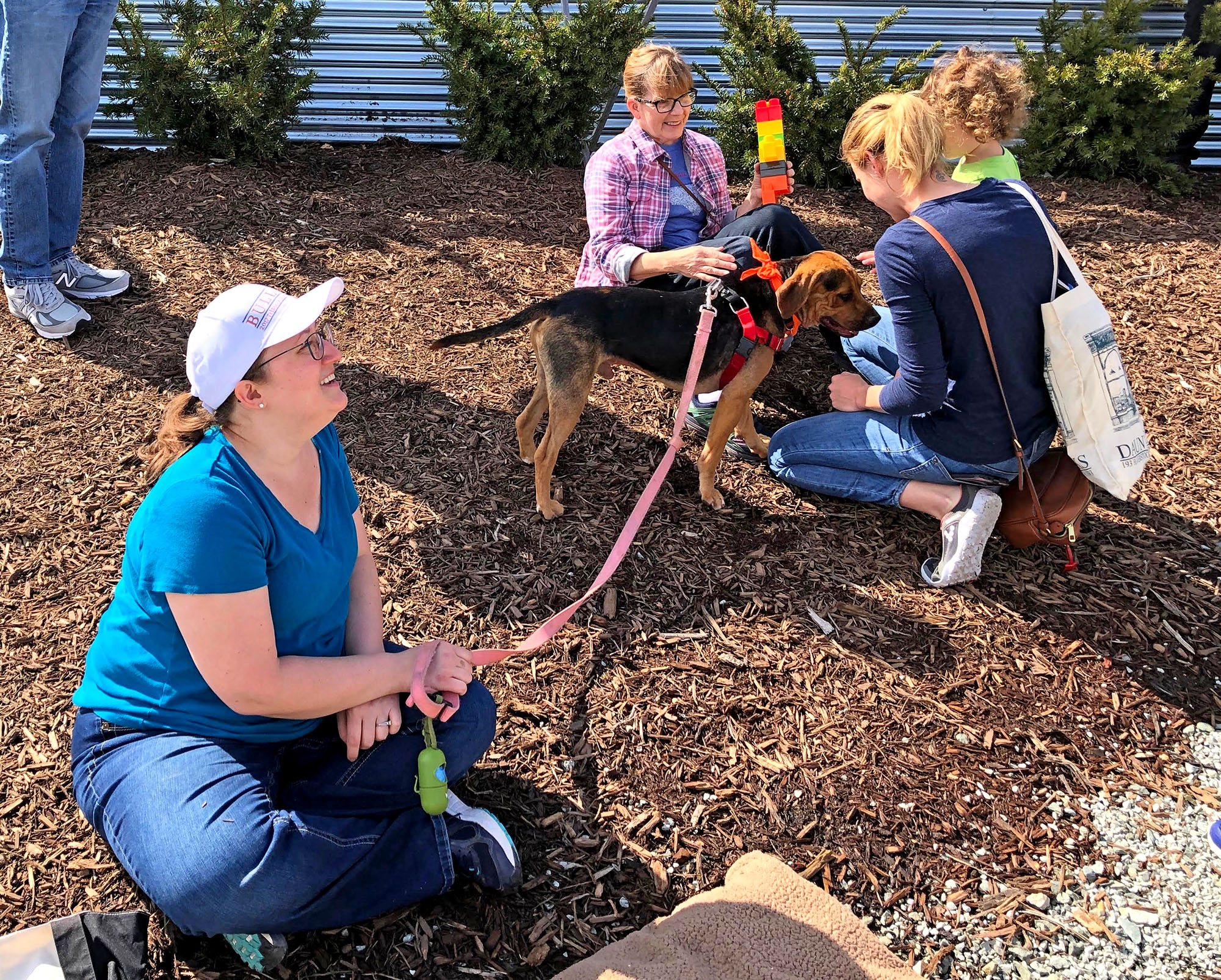 Hagrid the Happy got plenty of love and attention during the event, especially from children. Tamara Mueller (left) is only taking care of Hagrid for the day, but she and her partner have fostered five dogs of their own through Independent Animal Rescue. (Staff photo by Johnny Sobczak)

The sun shines down on the picturesque spring afternoon of April 6 at Durham’s Bull City Ciderworks, and Independent Animal Rescue (IAR) is gathering nine of its foster dogs for its latest adoption event. 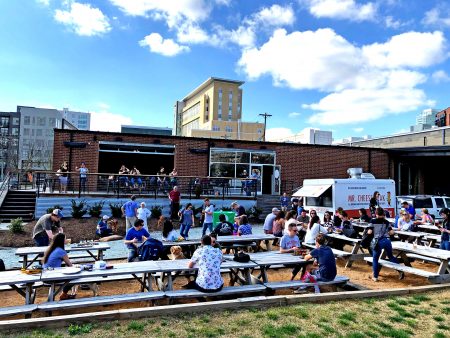 The outdoor space includes a deck and large grassy area. Dozens of Durham residents are spread out across picnic tables, donning sunglasses and sipping on cups of cider. Wes Schobel, the event coordinator and host for IAR, sets up a table with the organization’s banner, brochures and business cards.

IAR is a Durham-based nonprofit organization that was founded in 1994. With the support of over 100 unpaid volunteers, the group works to rescue and provide safe care for animals in the community.

A significant part of finding homes for these rescued animals is the adoption events that IAR hosts nearly every week. Ensuring that these events go off without a hitch is a big responsibility, but Schobel took it on as soon as he began volunteering in early 2014.

“I started out doing these events before there was a single person hosting them all. It was just random people, but I did a couple, and I really liked doing them. So about two years ago I decided to go ahead and take this over full time,” Schobel says. “I started actually planning the events, contacting the venues and scheduling the events.”

When Schobel first started, he was hosting one event a month. Once he took over, he increased the events to nearly one per week and has now hosted more than 200 in total.

What has surprised Schobel the most about hosting events in Durham thus far? “None of the venues that I have asked, in two years, have said no. Everyone has said yes.”

Schobel spends most of the event drifting around the outdoor space, stopping to visit with each of the foster dogs and their parents. Schobel says he is a big dog lover, but doesn’t have one of his own at the moment. For him, part of the joy in hosting is getting to spend time with IAR’s dogs.

One of these is Hagrid the Happy. The 8-month-old brown and tan pup sits next to a picnic table with Tamara Mueller and Jason Ast. Hagrid is not the couple’s own foster dog; they are taking over for the day while his foster owners are unavailable. This gesture is just one of many indicating the tight-knit nature of IAR’s foster group.

Mueller and Ast began working with IAR after rescuing a couple dogs on their own. “We just wanted to help out. We own a house, so no one can tell us not to,” Mueller says. “We had room in our life for another dog, so we figured we may as well give it a try. It is super gratifying and rewarding and happy when you’re able to find a home.”

Ast says there are plenty of ways to help IAR’s cause apart from taking on the responsibilities of fostering. Volunteers can take dogs to events or spend time with them outside during the day. “I’m going in on Tuesday to walk somebody else’s foster dog,” he says. 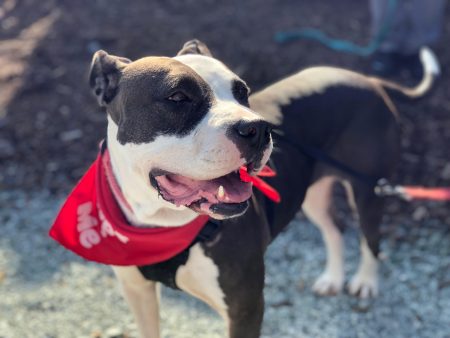 Esther Mack has been fostering Molly B, a three-year-old pit bull, since September. “I really wanted to have a dog, but I can’t afford it, and I don’t want that responsibility of 10, 12 or 14 years, so I looked into fostering,” she says. (Staff photo by Johnny Sobczak)

For Esther Mack, IAR has given her the chance to form a relationship that otherwise would not be possible. While Mack grew up with dogs and has been a dog person her entire life, she cannot currently afford to make the commitment required to owning one.

Mack joined IAR in September and fostered a puppy for a short time, but is now only fostering a pit bull named Molly B. As the two sit together in the shade, Mack has nothing but praise for the work IAR does.

“They are really supportive and have all sorts of supplies and food that is free to the foster parents, so there is no cost out-of-pocket for me,” Mack says. “You get assigned a mentor when you start, who is there to answer any questions, which is really helpful. They also have trainers that work with IAR who, also at no cost to the foster parents, will come and help if you have problems teaching your dog to behave.”

Almost all of the customers at Bull City Ciderworks stop to pet and greet the foster dogs at the event. For Schobel, having people meet the dogs and learning about what these foster parents do for IAR is the most important part of events like these.

“The biggest benefit is the exposure. A lot of it is just getting our name out there,” Schobel says. And the exposure for IAR benefits more than just the dogs that show up at an event.