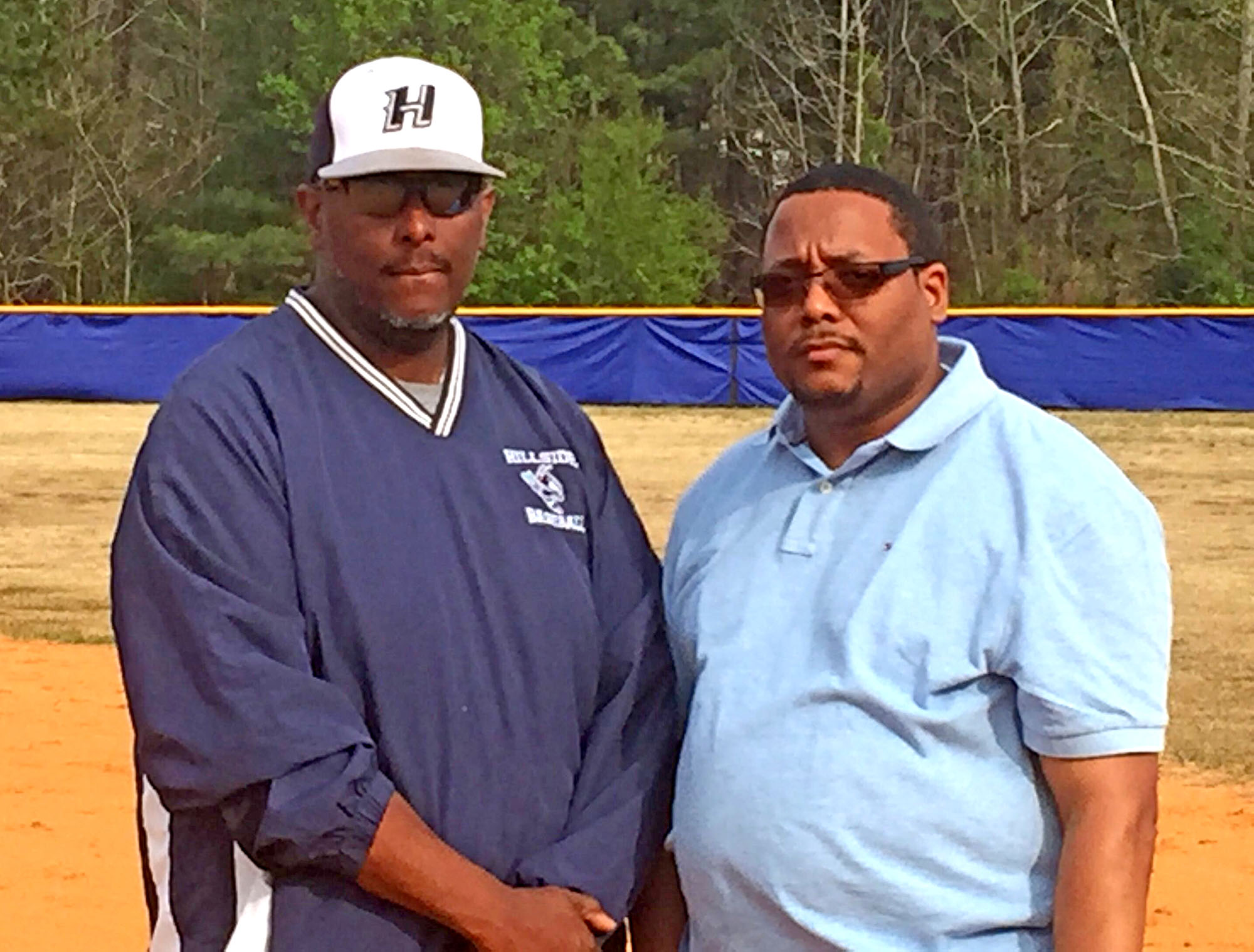 Malcoum Green (left) took over the role as head coach for Hillside baseball in 2015. During his time as head coach, he has taught his players that there is more to life than just wins and losses. He stands beside assistant coach Anthony Leak (right), who works alongside Green to help players improve both on and off the field (Staff photo by John Bauman).

In sports, the scoreboard often serves as the judge, jury and executioner — the measure of success or failure at the end of the game.

But the Hillside High School baseball program refuses to measure its success only in wins and losses on the baseball diamond. The players and coaches understand that success can mean more than just numbers on a scoreboard.

Senior Josephus Shabazz said that while the win-loss column is important, it’s not nearly as important as the impact that the game has on each player.

This mindset has been instilled by head coach Malcoum Green, who took over the program in 2015. The Hornets went 3-12-1 during Green’s first season and improved to 8-12 the next year. He is helped by veteran assistant coach Anthony Leak, who has been the head coach in the past.

Coach Malcoum and Coach Tony, as they are known by the team’s players, are helping the program take baby steps forward. Both coaches understand the unique challenges that come with coaching baseball at Hillside.

“We start with some guys who have never played baseball before, and we try to mold them,” Green said.

Green said that his team is composed of a lot of raw talent, and that the young men on his team are growing each day.

“If something is raw, it’s got to be disciplined,” Green said. “That’s the thing they are learning. Some of them are having to realize the stuff we did in middle school or wherever we were does not work at the high school level. That’s one of the biggest obstacles we have right now.”

Green said when little victories come, they are much appreciated. In the last few years, the Hillside baseball program has been able to update both its field and scoreboard. A windscreen was added to the outfield fence, and a brand new “turtle,” or a portable outdoor batting cage, was added for batting practice.

Green said he enjoys having the opportunity to help his players succeed both on and off the field. His biggest point of pride as a coach isn’t something that happens within the painted lines of a baseball diamond.

Green has spent four years with the seniors on the team. He said that it has been a blessing to see the players get to where they are today.

“Seeing them graduate, go on to the next level — whether it is the game of baseball or it’s just the game of life — is probably my biggest joy,” Green said.

The baseball program at Hillside is not only helping kids graduate, but also sending more and more kids to the next level as baseball prospects. This year’s team has at least three players who are generating interest from college programs. Senior Corey Mitchell Jr. has already signed with Mid-Atlantic Christian University in Elizabeth City.

Junior Amaree Leak, a shortstop, is another player getting looks from college programs. His stats, as of April 7, tell part of the story why. In his 46 career high school games, Leak has a .398 batting average, 21 RBIs and 13 walks in his 132 plate appearances. Leak is also one of three team captains this season.

Leak said the main lesson that he’s taken away from playing for Hillside baseball can be applied both on and off the field.

Leak said that Green instills this lesson into the team.

“It makes us practice hard, go harder,” Leak said. “And it shows on the field.”

That effort on the field is starting to pay off. The team got its first win of the 2019 season on March 23 against Bartlett Yancey. It was a 12-6 road win for the Hornets that raised the spirits of the whole team.

“It felt good,” Shabazz said. “It was good for team effort, good for team morale. Everybody came to practice the next day excited and knew that [winning] was something we were capable of.”

Green believes in his players and believes that the Hillside baseball program can accomplish a lot in the future.

“This is a program that can accomplish anything,” Green said. “The sky is the limit.”

Hillside plays in a tough conference – the Big Eight 3A Conference – with rival Durham schools like Southern Durham, Northern and Jordan. Orange and Chapel Hill high schools, two area baseball powers, are also conference foes after a recent restructuring of the conferences in the area.

It will take time and more baby steps until Hillside can consistently compete for a conference title. However, Green said his goal is to help make that happen.

“That’s my mindset,” Green said. “I want to see this team become a consistent team in the state playoffs.”

But even if wins on the field never come, the Hillside baseball program will continue to use the sport to help improve the lives of young men.

“Wins and losses will take care of itself,” Green said. “But being able to see them grow as young men is more important to me because eventually, this game is going to be over. And I still want them to be able to succeed at the game of life.”