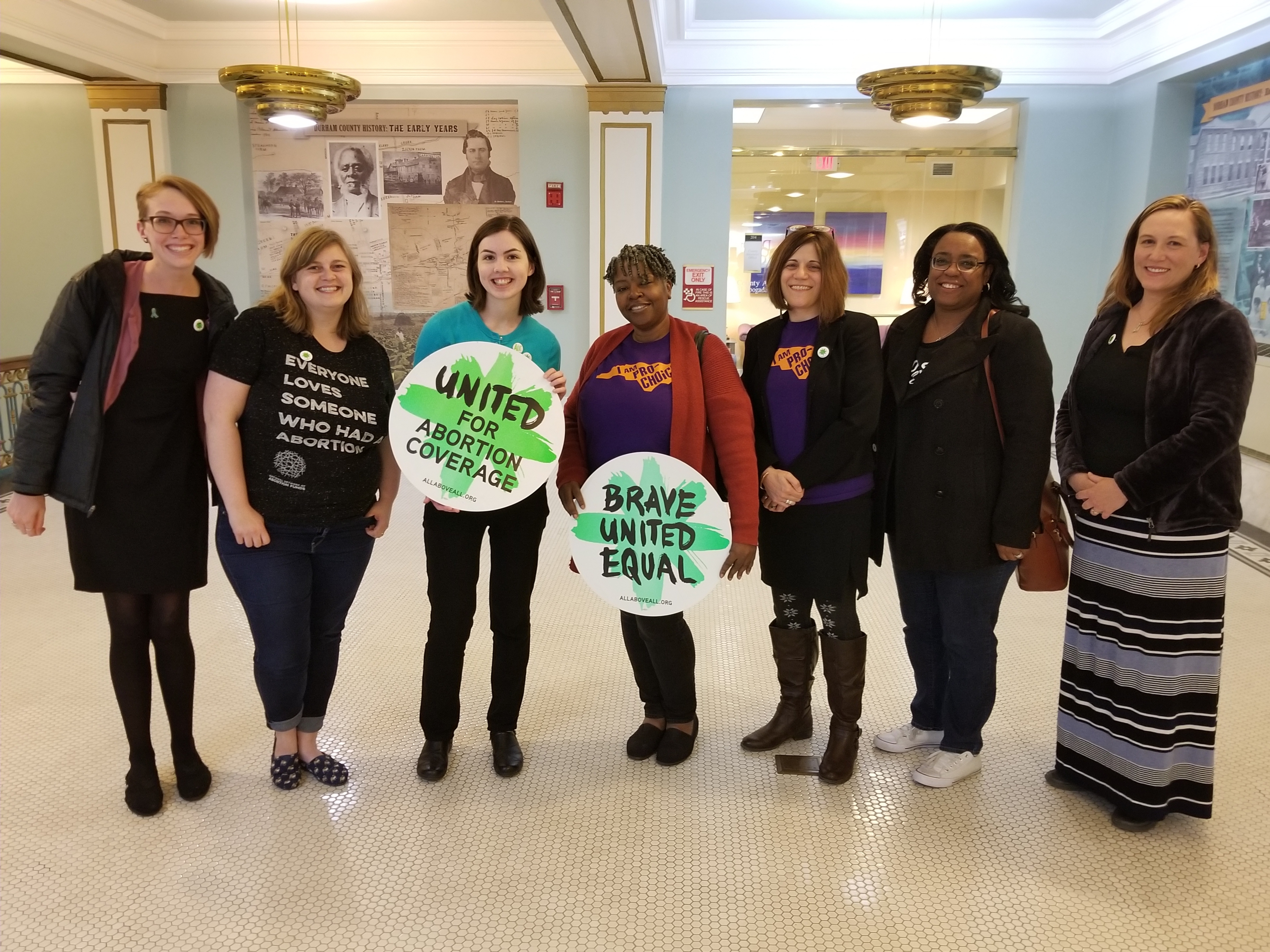 Members of NARAL NC Pro-Choice gather at the Durham County Board of Commissioners vote on the Hyde Amendment resolution last year.

Abortion, women’s reproductive rights, and gender equality will be on the ballot in the 2020 presidential election.  With that in mind, NARAL Pro-Choice North Carolina, located in Durham, has joined 10 other participating organizations in launching a petition to make affordable reproductive health care an important topic on the debate stage.

“The petition is asking for specific questions on abortion to be included at the November Democratic debate,” said NARAL Pro-Choice NC’s Director of Development Toni Curry. “And that’s what we hope will happen. We get the signatures then pass them along and then hard questions will be presented to presidential candidates at the debate and they will answer them, and citizens will be able to make better informed decisions about who they want to vote for.”

The nonprofit organization doesn’t just advocate for abortions to remain legal in the U.S. NARAL aims to address pregnancy discrimination, access to birth control options, and paid family leave for all women, regardless of their zip code, according to a statement on its website.

“What we want to do in the city of Durham is similar to what we want to do around the state as well,” Executive Director Tara Romano said. “We believe people should be able to make decisions that are best for their lives, their families, and based on their experiences. That kind of reproductive freedom is usually an essential part of gender equity. So, statewide, we do take unity and gender equity lenses, as well as racial equity lenses. But we’re looking at policies that are passed at the state level, by how they impact people’s reproductive freedoms.”

Romano added that NARAL NC is working with other coalition partners to help “expand Medicaid” in the state, which would provide low-income citizens with access to healthcare.

“They have not expanded Medicaid in North Carolina,” Romano noted.

“Right now in the private insurance system, women are charged more for being women because we have to see doctors more.”

“Right now in the private insurance system, women are charged more for being women because we have to see doctors more,” Romano said.

Pregnant women on federal Medicaid health insurance are unable to have an abortion covered due to the Hyde Amendment, a provision originally passed by Congress in 1976, and revised several times since.

Last April, Durham County became the first local government in North Carolina to call for the federal repeal of the Hyde Amendment, thanks to NARAL NC Pro-Choice and other coalition partners. The organization worked with the City Council and County Commissioners to help amend the law. And there was support from outside the state.

“All the non-profits in this country are connected,” Curry said.

But she acknowledged they face a tough fight against entrenched forces.

Curry added that “extremists are paving a road where abortions could no longer be available — just as it was in the past.”

According to the Pew Research Center, women make up about half of the U.S. labor force . Women are often discriminated against in the workplace once they become pregnant.

Expecting mothers are faced with the obstacle of not being able to carry a water bottle on the job and unable to take frequent bathroom breaks, and even refused a work position if applying for a job, according to a statement on the NARAL NC Pro-Choice website.

Throughout the U.S., women are still not compensated while taking a leave of absence from work after giving birth.

Even though the federal anti-discrimination law protects workers, states can create their own laws. North Carolina is one out of five states that did not have “any protections for pregnant women beyond federal law” according to a statement on the website.

In September, N.C. Gov. Roy Cooper passed Executive Order 95, permitting paid parental leave after a partner or woman gives birth, or in the case of adoption or foster care.

“I think that is fair and helpful,” Curry said, “and I think it is necessary.”

This year, members of NARAL NC Pro-Choice have focused on exposing the truth about crisis pregnancy centers.

“When you look at their website, they tell you they offer all of these services,” Curry said. “But when you get inside, it’s about prayer. It’s about shame. It’s about coercion and fear, and having a person considering an abortion change their mind.”

Curry said there are over 100 “fake clinics” and only 15 comprehensive Women’s healthcare clinics in North Carolina. She added that one of those “fake clinics” in Raleigh has received generous funding from the state.

“If we don’t accomplish anything else, what we want to do is break that stigma around reproductive health and abortion,” Curry said.

Aaliyah Bowden is a junior mass communication major at N.C. Central University. This fall she is serving as a writer for the Durham VOICE.