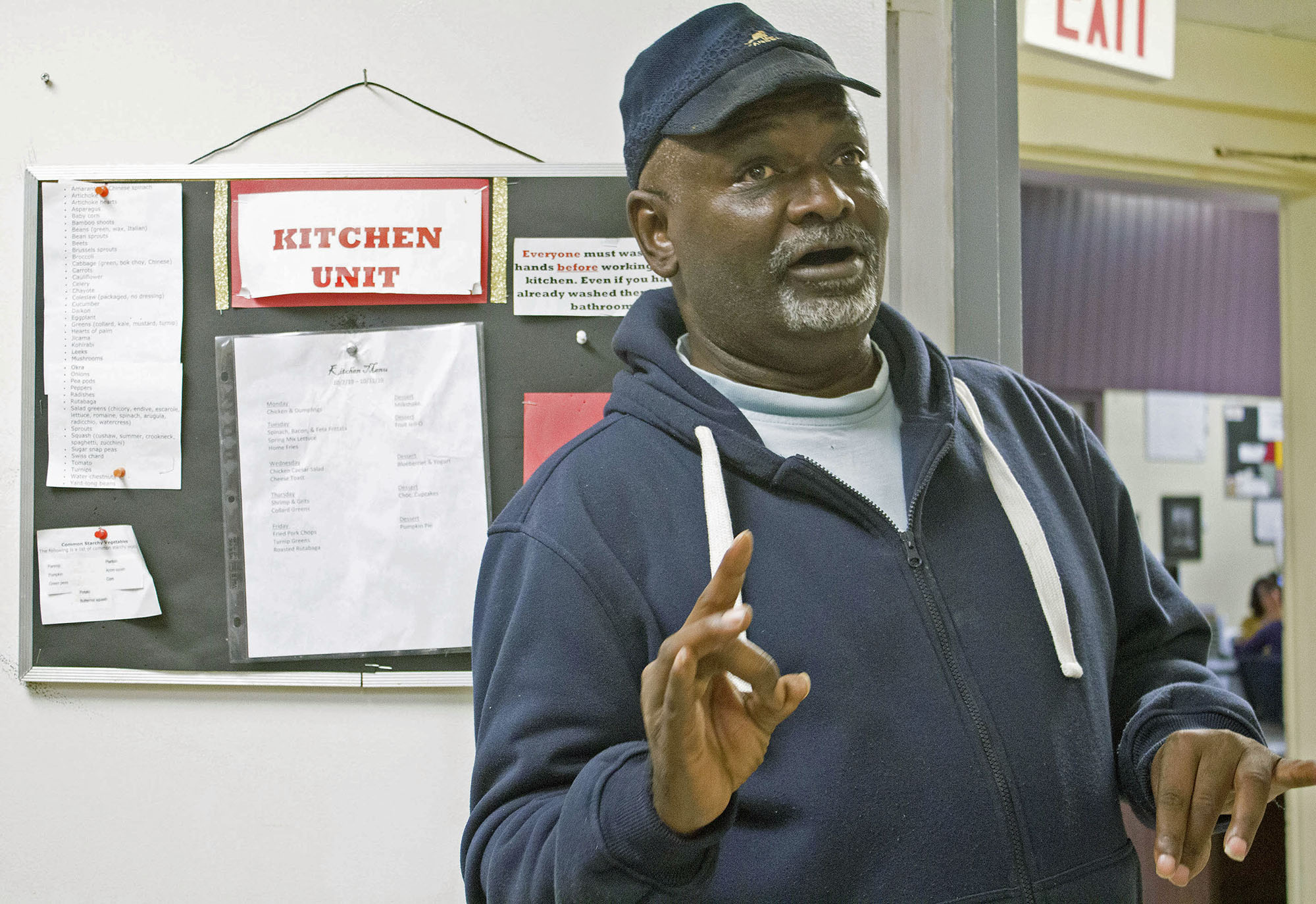 A.J. explains that when entering or leaving Threshold, members and visitors have to sign in and out with the front desk. Club leaders said that there used to be as many as a dozen other similar clubs in the state, with the closest being Club Nova in Carrboro, but budget cuts have cut the services down to only five. (Staff photo by Khadijah McFadden)

At first glance, the one-story brick building located in Wellons Village, just off of Gary Street, doesn’t seem too extraordinary.

But on the inside, there are hundreds of stories ready to be told.

Threshold Clubhouse Durham (TC) is a place dedicated to serving adults with severe mental illness — such as schizophrenia, bipolar disorder and major depression — with support needed to help them land jobs, improve education and achieve personal goals while staying out of hospitals.

“We instill that this, mental illness, is not all it is,” said Elizabeth Barber, executive director at Threshold. “Create your own destiny.”

Threshold wants members to feel safe and like a part of the family where they can be themselves. Founded in 1985 by a core steering group of about 25 to 30 people, the clubhouse is a work-oriented program.

“We’re for the community and those recovering from mental illness,” Barber said. “Mental health is a lifelong experience, and we’re here for the whole journey.”

At Threshold, club members help the clubhouse function efficiently— from front desk reception to to cooking meals in the kitchen to deciding what staff gets hired — club members are involved with every decision affecting Threshold.

It’s a place where members learn responsibility and adaptability; while understanding stress and what healthy things can make them feel better.

As our tour guide, Anthony Williams, also known simply as “A.J.,” told the VOICE, “It’s somewhere we can go with a home environment where we’re not looked down on, judged or approached in a wrong manner.”

A.J.’s story is just like many of the others at Threshold. He first heard about TC from his therapist.

A club member for the past decade and Durham “born and bred,” A.J. says he used to hang around in the beginning. He wanted to be a part of the club but said he wasn’t ready to give up the “street life.”

“I was involved in those streets,” he said. “Drugs, alcohol, hustling. I got tired of looking for the police and running.”

A.J. said he became a productive citizen when he gave up street life and became a member at the club. Now he’s “all in” and acts as a tour guide for visitors wanting to learn more about the club for family or community members.

Ali Swiller, the associate director at TC for more than 20 years, sums it up well.

“We don’t shun diabetes,” she explained, concluding, “So don’t do it to someone with mental illness?”