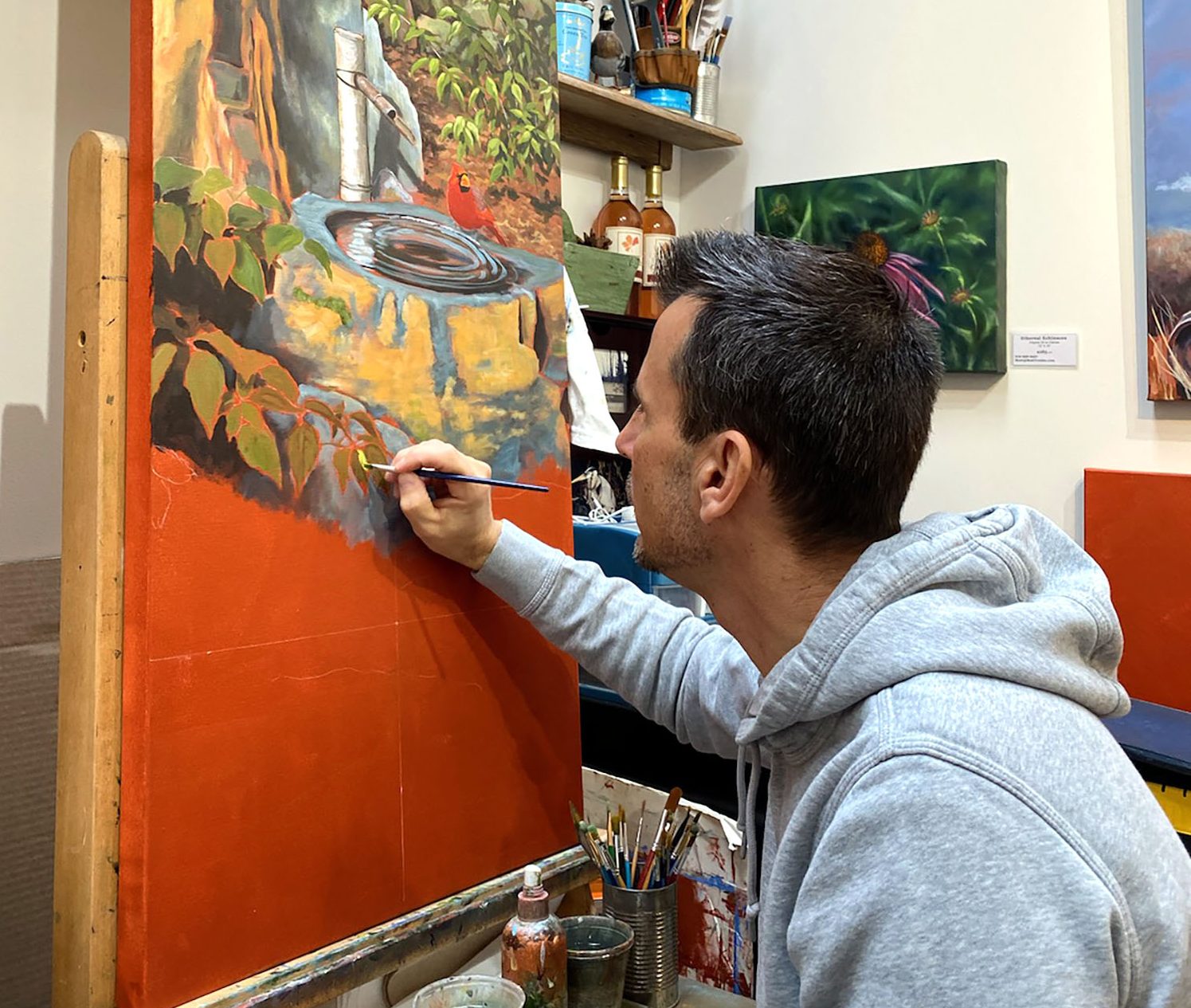 Artist Matt Tomko works on one of five paintings he’s been commissioned to do by Duke University’s Student Wellness Center in his studio on the Golden Belt campus in East Durham. Tomko, who has been heavily influenced by his love for nature, earns half of his business from creating pet portraits. (Staff photo by Victor Hensley)

The love most people have for their pets is an unbreakable bond. And many of us choose to express the strength of that bond in unconventional ways.

Some choose to get the face of their furry feline etched on their skin forever in tattoo form. Others opt to dress their personable pooch in outfits to match their own.

“At first, I was worried that whatever I painted, they wouldn’t see it as their pet,” Tomko said. “Pets are like people’s babies. They’re part of the family. It was just too much pressure.”

From a small chair in the corner of his studio on the Golden Belt campus in East Durham, Tomko worked on a painting of a tranquil scene at Sarah P. Duke Gardens, featuring detailed renderings of different plants, elaborate stonework and a cardinal sitting by a small fountain.

The piece is one of five paintings he’s been commissioned to create for Duke University’s Student Wellness Center. He expects the piece to take around 60 hours to complete.

Tomko, a Pennsylvania native, has been drawn to nature since he was a child. When he was a toddler, he began drawing wildlife using crayons. His early drawings may not have been masterpieces, but they were a start.

“There was an attraction there,” Tomko said. “There was an excitement about seeing wildlife and drawing them was a way to keep them with me, because I obviously couldn’t be looking at them all the time.”

As a teenager, Tomko continued to develop his skills through art lessons. But, like many artists, Tomko’s parents told him he couldn’t go to college for art, citing the lack of opportunities for making money in the field.

In 1989, he earned a degree in mathematics at King’s College in Pennsylvania. In 2004, after decades of working in industrial engineering and process improvement, he realized he needed a change. Despite always being a pencil artist, he decided to try his hand at oil painting. He never looked back.

“The work that I was doing was very taxing, and I was looking for something to get me back some stress relief and calmness,” Tomko said. “Painting, especially the things I chose to paint, did that.”

In 2009, he came to Durham and eventually got his studio at Golden Belt. For many years, he refused to paint portraits of pets, worried that he couldn’t depict them realistically. It took a special request for that to change.

A friend from Pennsylvania reached out to Tomko in 2010 after the death of her brother, who had “adopted” a cow, Sophia, at a local dairy farm as part of a fundraiser. She requested that he paint a portrait of the cow as a tribute to her brother. He accepted the challenge.

“It turned out fantastic,” Tomko said. “Not only was she thrilled with it, but I felt like I had done this particular cow – and her brother’s memory interacting with the cow – justice. From then on, it was like, ‘OK, I can do this.’”

Now, pet portraits make up approximately 50% of his business.

If someone local requests a portrait of their pet – which comes in a minimum size of 11 inches by 18 inches and costs $350 – Tomko will ask to meet and take photos of the pet to get a sense of their personality and distinguishing characteristics. He says he wants to get everything just right, up to the minutest detail.

In his studio, Tomko displays one of his paintings of a mockingbird sitting on a branch. If you just glanced at it, you’d miss the two egrets lurking in the background. It requires a second look to see the whole picture.

“I think nature is like that,” Tomko said. “Until you be still in nature and take the time to actually be there, you’ll miss so much.”’