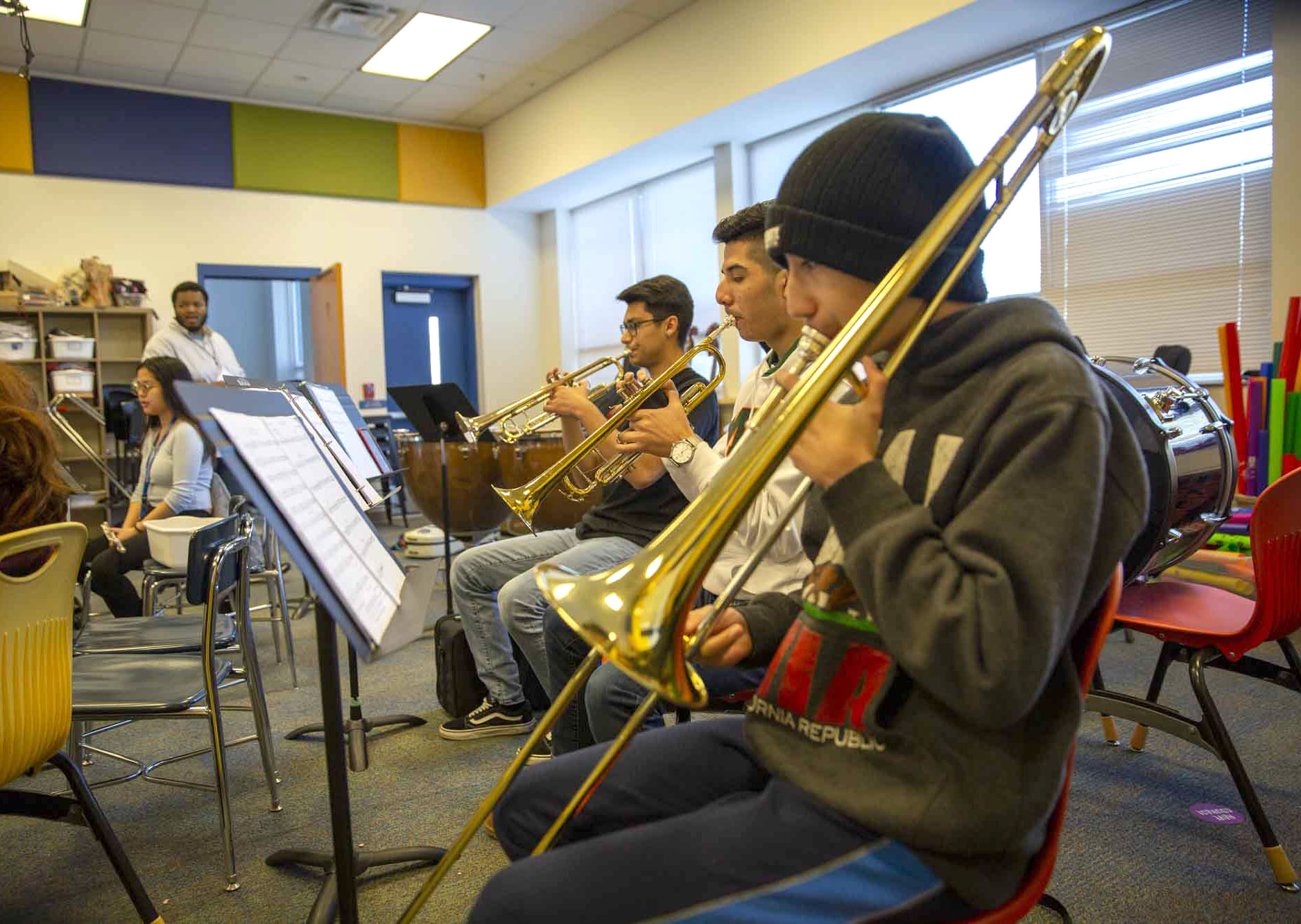 Out of cars ambled K-12 students from Durham and Raleigh, some shouldering black instrument cases nearly half their height.

As the sunlight warmed the January nip in the classrooms, young musicians in the Kidznotes program warmed up for a full afternoon of practice.

Nearly 300 students come to the Durham Kidznotes program, which offers out-of-school musical instruction for eight to 10 hours a week. The program partners with seven Durham schools, offering music and instruments free of charge.

For students who can’t afford private lessons or don’t benefit from a well-funded music program in their school, Kidznotes works to bridge an accessibility gap. According to its 2016 report, 71% of the Durham Kidznotes students qualified for free or reduced lunch at school.

“We are finding that bridge between the gap,” Rashad Hayward, assistant artistic director, said. “[Students] have the experience of making music together.”

Nick Malinowski, executive director, said that the program purchases most of its instruments, but donations and other outreach projects help supply instruments and other resources.

The Durham Performing Arts Center will host one major fundraiser on Feb. 7. The Loud Lemon Foundation presents Nashville Songwriters, a concert that will benefit three local organizations, Kidznotes being one.

Jeff Outlaw, songwriter and founder of the Loud Lemon Foundation, said all of the proceeds from the show get split up between the three organizations, though Kidznotes is the primary beneficiary.

Kidznotes’ advanced group of musicians will also get backstage access to perform at the concert.

“It’s a whole experience that most people do not get to see if they’re not taking music privately on their own,” Hayward said. “This is one of the events that we definitely look forward to giving them that experience.”

Sabinne Charles, a long-term Kidznotes musician and senior at Durham School of the Arts, will be participating in the DPAC concert for her second year and Kidznotes’ third year.

“Backstage, the little moments that me and my friends had, we were taking pictures in the mirrors, and we all have one of those Polaroid pictures,” Charles said. “It’s going to make me cry when I graduate. It was such an amazing experience.”

Malinowski credited Outlaw, who met Kidznotes three years ago, with the opportunity to perform at DPAC and showcase Kidznotes’ musicians.

“He’s given us a lot,” Malinowski said.

As the students filed in to practice on Saturday, some with the thought of the upcoming DPAC performance in mind, instructors brought out batons or led vocal warmups.

In another room of older students, Ruth Johnsen peppered her instruction with phrases in Spanish.

Kidznotes’ guiding value of learning together is based on the Venezuelan instructional model called El Sistema. Developed by Jose Abreu, El Sistema launched as a free program to offer music education to low-income students.

Still a success in Venezuela today, El Sistema found roots in Durham, where it has become a community-building tool. Besides cultivating an outside support network, involvement in Kidznotes also suggests some level of academic success.

Kidznotes students were found to attend school more regularly and become consistent A or B students, according to data collected by the organization in 2011.

Charles said the program helped her build a connection with peers and instructors who were passionate about music.

“It’s not common that you find people, especially in my age group, that are really, seriously into music,” Charles said. “We bond and grow this connection together. We always build each other up.”

To support Kidznotes at the Nashville Songwriters concert, visit dpacnc.com. Tickets can also be purchased on ticketmaster.com or at the ticket center on 123 Vivian St in Durham.