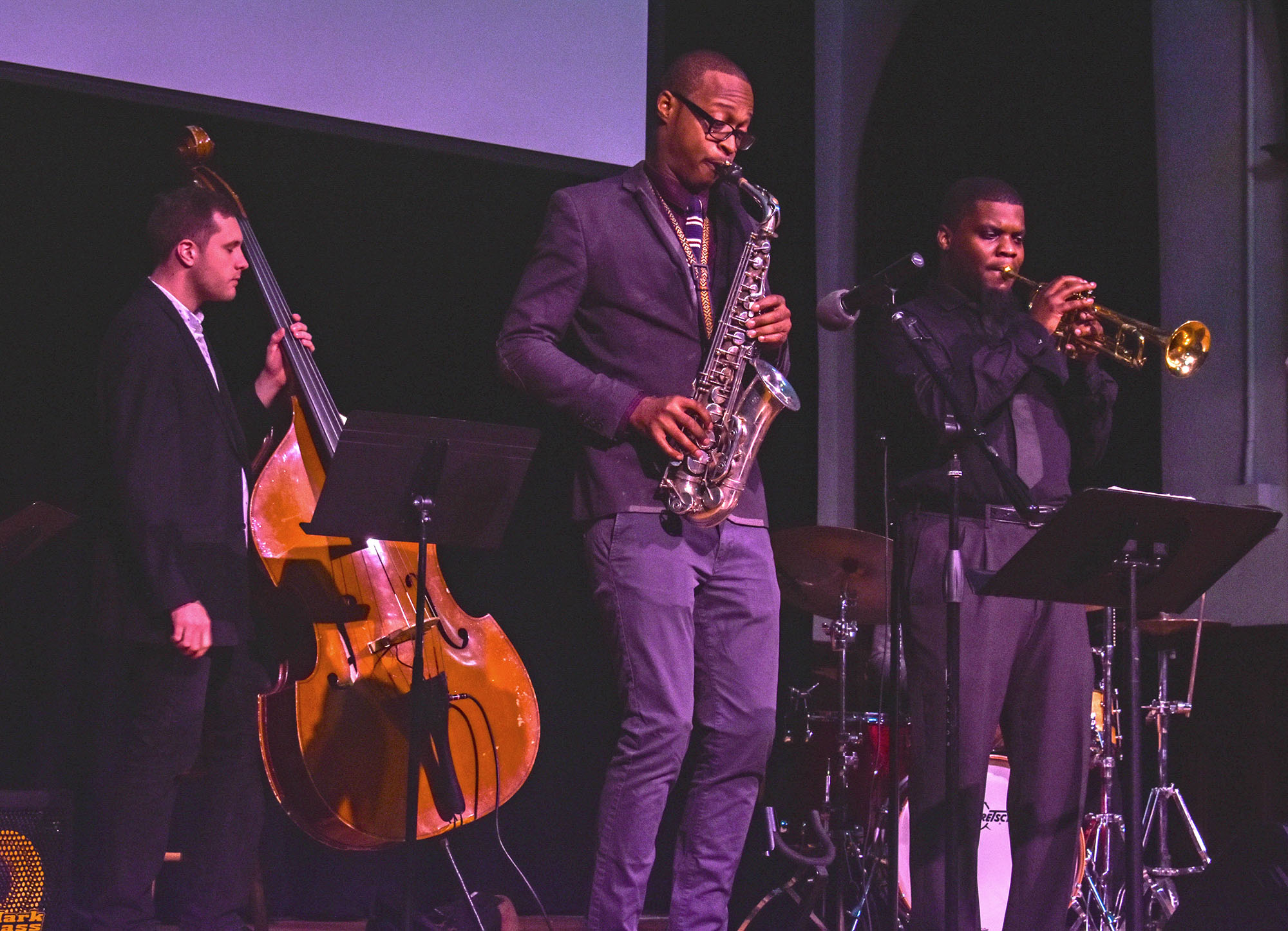 Chris Mills (right) plays bass while saxophonist Sam King and trumpet player Lynn Grisset play in front of him. This is the first time all five members have played these songs together. (Staff photo by Victoria Johnson)

The concert, called “Freedom Day: A Tribute to Max Roach,” celebrated one of the most important drummers in modern jazz history, the Hayti musicians said. A North Carolina native born in Newland, Roach pioneered bebop, a style of jazz known for its fast tempo, instrumental inventiveness and improvisation.

“He was one of the only drummers that could put on a full concert with just drums,” said Dwayne Jordan, who stepped into Roach’s shoes as the tribute ensemble’s drummer.

But the tribute is not just about recognizing Roach’s contributions to jazz. It fits into a larger effort to promote and revitalize Durham’s jazz community.

“This is the original music of this country, but it’s not celebrated as much as hip-hop or rock ’n’ roll,” Jordan said. “If there wasn’t jazz or black American music, then none of that other music would have happened.”

The tribute is the third concert in the Black American Music series hosted every other month by the Hayti Heritage Center and the Durham Jazz Renaissance Foundation, a nonprofit committed to promoting jazz music. The series began last September with a tribute to saxophonist John Coltrane. The Hayti Heritage Center also plans to host two more tributes later this year for singer Nina Simone and drummer Art Blakey.

Quentin Talley, program director at the Hayti Heritage Center, co-curated the series with Jordan, who is also the Durham Jazz Renaissance Foundation’s newest and youngest board member.

“Jazz kind of gets put in this pocket of things, this stereotype of finger-snapping and smoky clubs,” Talley said. “It gets put in this box sometimes, and that’s one of the reasons we decided to focus on black American music because that’s what jazz is at the end of the day.”

Part of the concerts’ proceeds will help fund jazz scholarships for area high schoolers and college students. Recipients of the scholarship, which the Durham Jazz Renaissance Foundation has been offering for years, have included Hillside High School and N.C. Central students.

Sam King, who played alto saxophone in Saturday’s concert, received one such scholarship in 2019. Originally from Baltimore, King graduated from N.C. Central’s jazz program last December and is a first-semester graduate student in the university’s jazz program.

“Jazz gives me the freedom, the liberty and the power to express myself without confrontation or without being judged,” King said. “It allows me to be free. It allows me to tap into my inner self and say what I need to say to the listener.”

King said he became a jazz musician because it is his people’s music and he grew up with it.

“My mom was a piano player, and my grandfather used to sit me on his lap and listen to jazz records at a young age, so the sound was in me,” King said. “When I got old enough to trial for band in middle school, I went for the saxophone and I just fell in love with music.”

Like Jordan and Talley, he too wants to preserve and expand the legacy of jazz music.

“Jazz is not dead,” King said. “As long as Sam King is here and I have my comrades and my bandmates, we’re going to make sure that we keep the music going.”