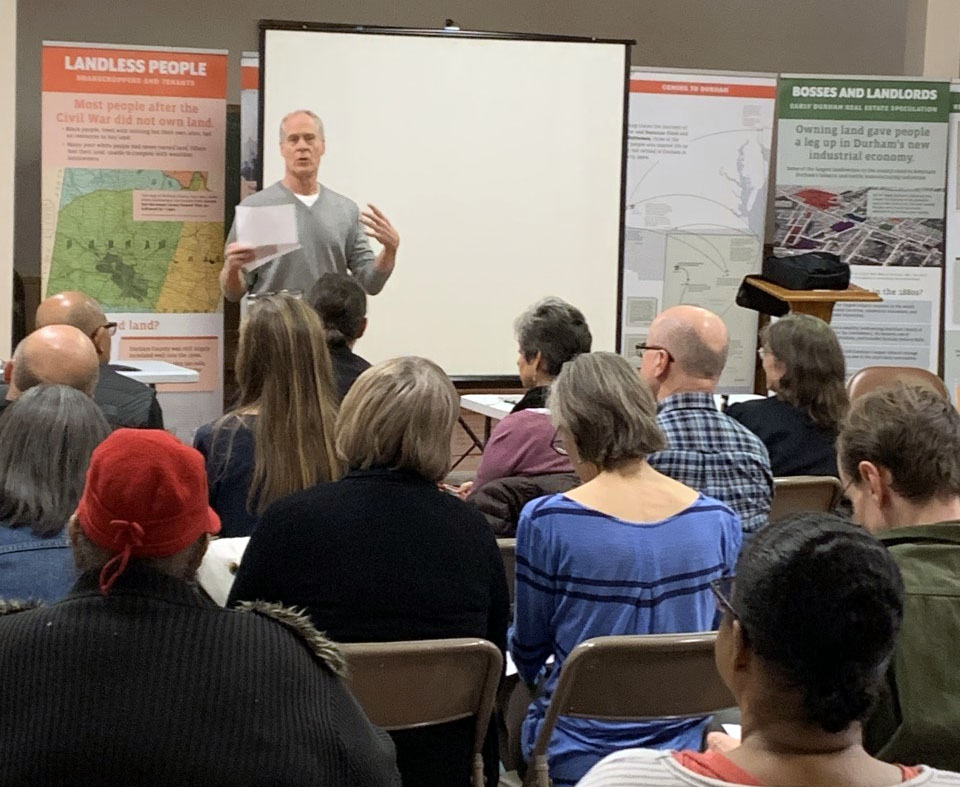 An exhibit created through a joint effort by First Presbyterian Church and Duke University Chapel entitled “Uneven Ground” opened on Jan. 3 to highlight the history of housing inequality and racial segregation in downtown Durham.

Originally commissioned in 2019 for the 150th anniversary of Durham’s founding, the exhibit now serves as a tool for reflection, learning and dialogue, according to First Presbyterian Church’s website.

Local community groups see the exhibit as a space for reflection and have adopted one of the church’s halls as a meeting place. On Monday, Jan. 27, the Coalition for Affordable Housing and Transit held its monthly meeting at the site of the Uneven Ground exhibit.

The significance of meeting in this space was certainly not lost on the coalition members and its leaders. They discussed issues of housing inequality among the banners displaying history of what they were fighting for.

“In learning about all of these things we get to be responsible about how we think about and plan for the future,” Breana van Velzen, coalition member and community minister at Duke University Chapel, said. “We’re surrounded by all of this history of land theft, segregation and policies that were seemingly harmless but weren’t—or were actually intending harm. So we have to think about that when we’re advocating for certain types of affordable housing.” ”

Van Velzen and other coalition members are concerned about the recent influx of gentrified neighborhoods in the area, which they attribute to a snowball effect caused by the 1987 construction of N.C. Highway 147, commonly known as the Durham Freeway.

Following the highway’s construction, the once thriving black businesses on Pettigrew Street closed and were replaced by luxury apartments—a luxury that many now simply can’t afford.

Van Velzen said this caused a “reverse white flight.” With more upper-middle class white people are moving to the area, African-Americans are being pushed away from downtown Durham and the perks it has to offer.

“You can’t end poverty or help people break cycles of generational poverty without having resources like transit, jobs and things like local community,” van Velzen said.

The coalition leaders know breaking these destructive cycles and finding concrete solutions to Durham’s racial inequity is no easy task, but they continue to work for progress.

Gulley and the coalition have been fighting to even the playing field of housing for years. While it seems Durham is trending in the wrong direction with increased gentrification, Gulley said they continue working to combat this.

“We’ve been active in a lot of things, from pushing the county and city government to set their first targets and goals for affordable housing to things as recently as pushing to have 80 plus units at the old police site and the 82 units that are being built right now at the Durham station,” Gulley said. “And on East Main Street we’ve been pushing to have about 300 units of affordable housing built there. That’s sort of who we are.”

As a long-time community member and politician in the Durham community, Gulley said he’s fully aware of the city’s history of racial inequity. Having the coalition’s meeting at the site of the exhibit put everything it stands for into perspective.

“This is what tells part of the story of affordable housing, racial segregation and lack of racial equity in Durham as well as the people who started to come together to push back on it,” Gulley said.

The exhibit will be on display through Sunday, Feb. 16, at First Presbyterian Church’s Watts-Hill Hall on 305 E. Main St. in Durham.

Matthew Audilet is a UNC-Chapel Hill senior reporting major from Greensboro. This spring he is serving as a staff writer/photographer with the Durham VOICE.