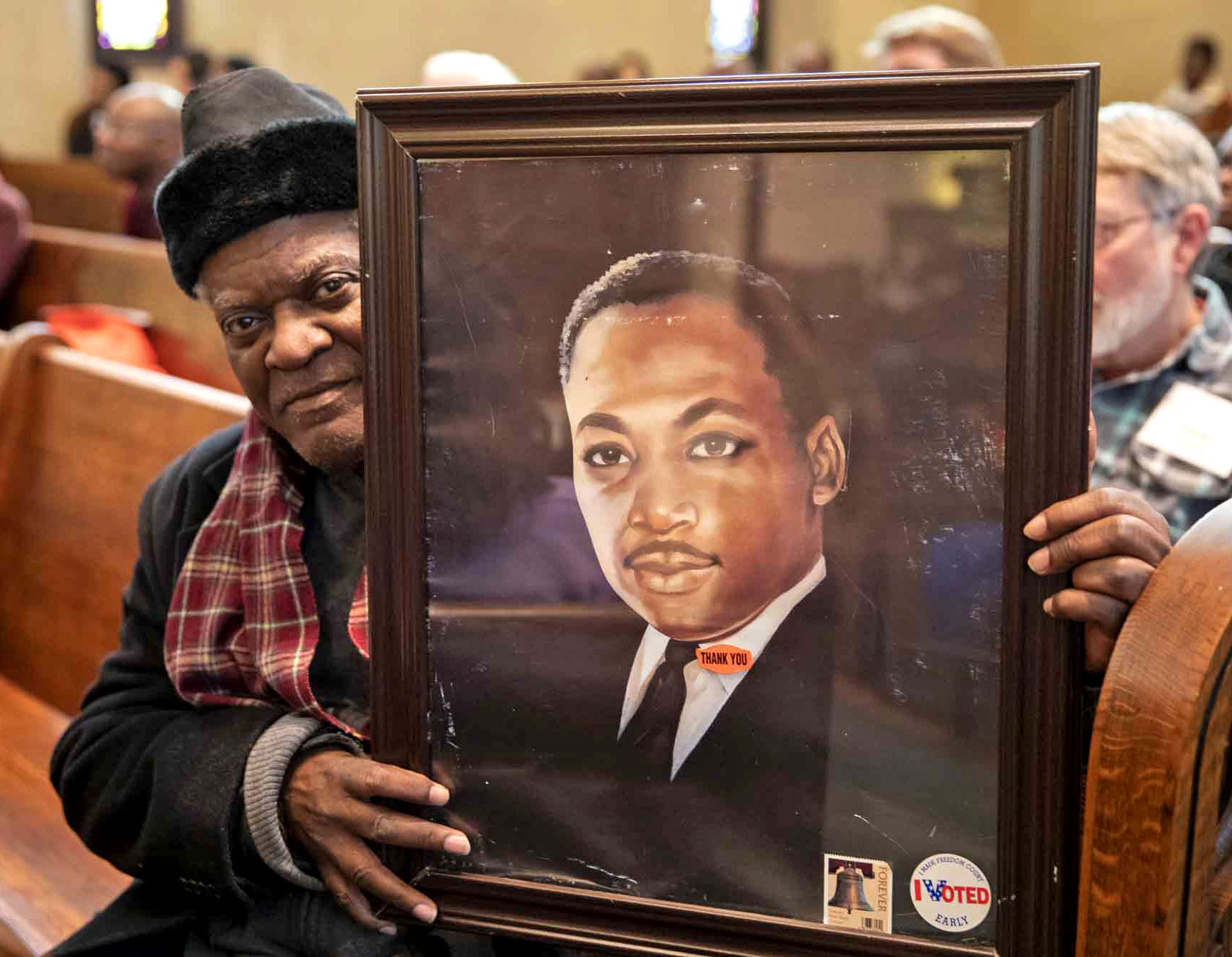 Monday morning, Jan. 20, about 250 marchers gathered in front of the NC Mutual Life building for Durham’s annual Martin Luther King Jr. Day Unity March and Rally. The group gathered for a short opening, then marched to First Presbyterian Church on East Main Street where speakers addressed the crowd from the pulpit.

Every year, this event provides an opportunity for local activists, city leaders and concerned citizens to come together and reflect on the challenges facing the community, as well as the progress being made.

“I’ve been coming for more than 30 years, since my kids were young, because this is a great place for Durham to come together, not only to celebrate the legacy of Dr. King but to look forward toward what we need to do as a community to improve our community,” Durham Mayor Steve Schewel said.

To newcomers, this year’s march seemed to have an electric buzz, as the December deaths at McDougald Terrace amplified the existing outrage over living conditions in units maintained by the Durham Housing Authority. Over 300 residents were evacuated to hotels in early January due to carbon monoxide levels, roach infestations, lead paint, gas leaks and hazardous conditions.

To many seasoned veterans, however, this year’s march felt very familiar.

In his opening remarks, Carl Webb, one such veteran and urban developer, reflected on the challenges Durham has overcome in the past, particularly the 1957 Royal Ice Cream sit-in where a group of African Americans requested to be served and were arrested for trespassing.

“Every year, I wonder, ‘Another march, is that enough?’” Webb said to the crowd.

Even as Schewel faced intense criticism throughout the day for his administration’s handling of the public housing crisis, he noted how this year’s march felt similar to marches from years past.

“It almost seems like almost every year there’s an issue of critical importance to deal with,” Schewel said.

As marchers followed the same well-worn path through the city, there was no feeling that this year’s march mattered less.

“There is no year this march means more than it means this year,” Schewel said in his opening remarks.

Schewel started the day by apologizing to residents of McDougald Terrace. He promised to make the situation right in the short term and to focus on expanding affordable housing in the long term.

While some in the crowd appreciated Schewel’s attempt to take responsibility for the situation, some of the McDougald Terrace residents felt it was too little too late.

Ashley Canady, McDougald Terrace resident council president, was one of them.

“It’s really hurtful because I’ve been calling out for help for the last 10 years for my community,” Canady said. “It shouldn’t take children dying or children being transferred to the hospital for cardiac arrest for Durham to wake up. Durham should have been woke a long time ago.”

Canady’s frustration is not unique. Throughout the day, marchers consistently kept the focus on actions rather than words.

“Today we march, but what about tomorrow?” said state Rep. Zack Hawkins, D-District 31. “We must act.”

While public housing took much of the focus in this year’s march, these concerns are part of the broader struggle to improve support systems for vulnerable citizens and break down the cycles of poverty in Durham.

The Rev. Dr. Warren L. Herndon, founder of Social Justice Ministries, said there is a disconnect between the local government and residents.

“We’re living in a very divisive society, a divisive community,” he said. “Locally, government is not supporting people the way they should, and the resources in this country [are] not being shared with the individuals that live in the margin.”

As speakers and marchers drew attention to the many challenges facing the community, they also spread messages of hope. Quoting Dr. King, one marcher carried a sign that read, “We must accept the finite disappointment, but never lose infinite hope.”

As the day progressed, it became all the more clear that Durham’s “infinite hope” lies with its people. Durham faces many challenges, but also boasts many superheroes. Many of those marching shared stories of how they were working to improve the community at the local level.

Frederick Farrington, founder of the nonprofit organization Bridging the Generational Gap for Hope, said he came to “represent the justice system” and equal rights for ex-felons.

“Well, it’s equal opportunity; it’s equality,” Farrington said. You know, MLK always pushed for equality and human rights, and I think a lot of times ex-felons don’t have a fair shot. You know, they’re looked at as, ‘Okay, you’re criminal. You’re going to continue to be a criminal, and we’ll put you on probation even after coming out of prison to monitor you, and some of those systems are designed for people to fail.”

No matter what the issue is, there’s somebody trying to help. Several speakers recognized these bright spots in the community and shared hope that together they can make meaningful progress toward a brighter future.

Wendy Jacobs, the chair of the Durham Board of County Commissioners, said there is a lot to be done, but Durham knows how to do it.

“It’s going to take every single person in this room, our city and government, our schools, our community, our nonprofits, our churches,” Jacobs said. “We are Durham. We can make it happen. We know the pathway up to the mountaintop.”

Herndon echoed her faith in the community, but said how important it is to get all of these people aligned around common goals by having community meetings about three times a year.

Canady won’t easily forget the promises of support she heard from speakers throughout the day.

“I just really hope that everybody sticks to their word and actually continues to stand with our community,” she said. “Not just speak[ing] it because you’re in front of people, but put some action behind those words.”

*For more information about how to help those impacted by Durham’s Public Housing Crisis, visit https://www.newsobserver.com/living/article239030683.html*

Anthony DeHart is a junior journalism major at UNC-CH from Hickory. This spring he is serving as a staff writer/photographer with the Durham VOICE.

Brandon Callender is a senior reporting major at UNC-CH from Durham. This spring he is serving as co-editor of the Durham VOICE.