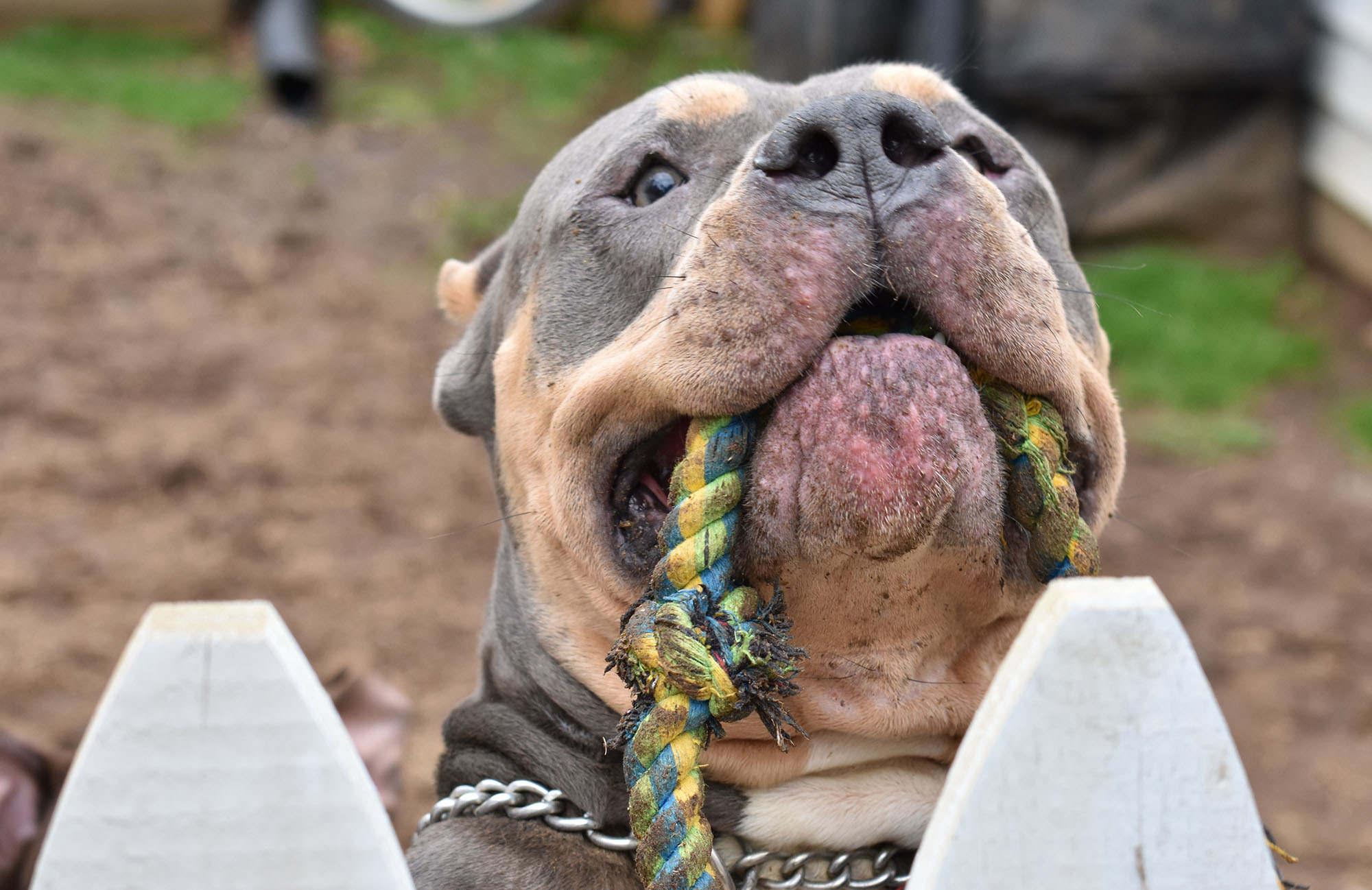 Petey, 2, plays with toys in Clark’s backyard in Durham Friday. Candace Taylor, Clark’s fiancée, said he’s their goofiest dog. “He acts like he’s about six months,” she said. “That’s how he likes to play.” (Staff photo by Victoria Johnson)

Six years ago, his fiancee, Candace Taylor, asked him to buy a dog to keep her company while Clark was deployed with the U.S. Navy. In 2016, Clark decided to breed a litter of seven puppies, hoping to recoup the money he’d spent on her dog, Hazel.

But then he stumbled upon another idea: emotional support dogs for troubled youth.

After leaving active duty in 2016, Clark brought his puppies to his shared house with Taylor on Marne avenue in Durham. He taught children’s football that summer, and the neighborhood kids he coached often came down to his house every day to play with his puppies.

“I saw they had a positive impact on the kids, so I thought, ‘This could probably go somewhere,’” he said.

In November 2016, he first came up with the idea for Direct Affect Bully Kennel, which he registered with the state in 2018. Besides breeding and selling puppies, his kennel provides services like boarding, daycare, grooming and puppy vaccinations.

Since then, he’s bred five generations of puppies and usually sells a litter of puppies once or twice a year. He’s caring for five dogs right now: Hazel, Chicago, Petey, Lola and a puppy named Ace. All are American bullies, a 29-year-old breed that came from mixing American pit bulls and Staffordshire terriers.

Taylor said the kennel offers many kids something else to do in the neighborhood “other than trouble.”

“They can come down here over the summer instead of getting into something else,” she said. “The parents knew that they were back here playing with the dogs.”

They’d often teach training tips to the kids who came, like how to make the dogs sit or come.

“For some kids, it seems like trouble kind of meets them, and for them to have this outlet here in our backyard is kind of rewarding,” she said.

Besides working with youth, Clark’s kennel has another mission: educating people about the American bully dog breed.

Because American bullies share bloodlines with pit bulls, Clark said that many people confuse the two breeds and assume that bullies are aggressive.

“People just look at it like, ‘Oh, that’s a pit bull. It’s going to attack. We shouldn’t get pit bulls. We should get something else,’” Clark said. “They’re not as aggressive as people think they are.”

While pit bulls are taller, slimmer and more athletic-looking, Clark said American bullies are shorter and stockier with bigger heads, thighs and chests.

Clark said that bullies can and have transformed lives – which is why he named his business Direct Affect Bully Kennel.

Taylor said her American bully, Hazel, is the sweetest, kindest dog she’s ever had. In fact, she said she thinks of Hazel as her own daughter.

“She will make you fall in love with her,” Taylor said. “That’s how precious she is.”

“Will she protect me by any means necessary? Absolutely, because that’s what any family dog would do for their owner,” she said. “But is she outright aggressive? No, and anybody who has met her can tell you that she doesn’t deserve to be labeled as aggressive.”

Antione Davis, 45, lives in northeast Durham near the Kipp Durham College Prep School. He bought a 6-month-old bully puppy, named Reign, from Clark last year for his 5-year-old daughter, who adores her.

“They’re great together,” he said. “They’re like two kids when they’re together.”

He said Reign rides everywhere with them, even to church or when he’s changing the oil in his car.

“She’s not aggressive at all,” he said.

Clark said he’s looking for a larger building in Durham to house the kennel. The business has expanded more than they expected, and Taylor said they’d like to reach a larger community.

“Our vision is large, so we definitely have a long way to go,” Taylor said. “But I think we’re off to a great start in impacting the Durham community.”