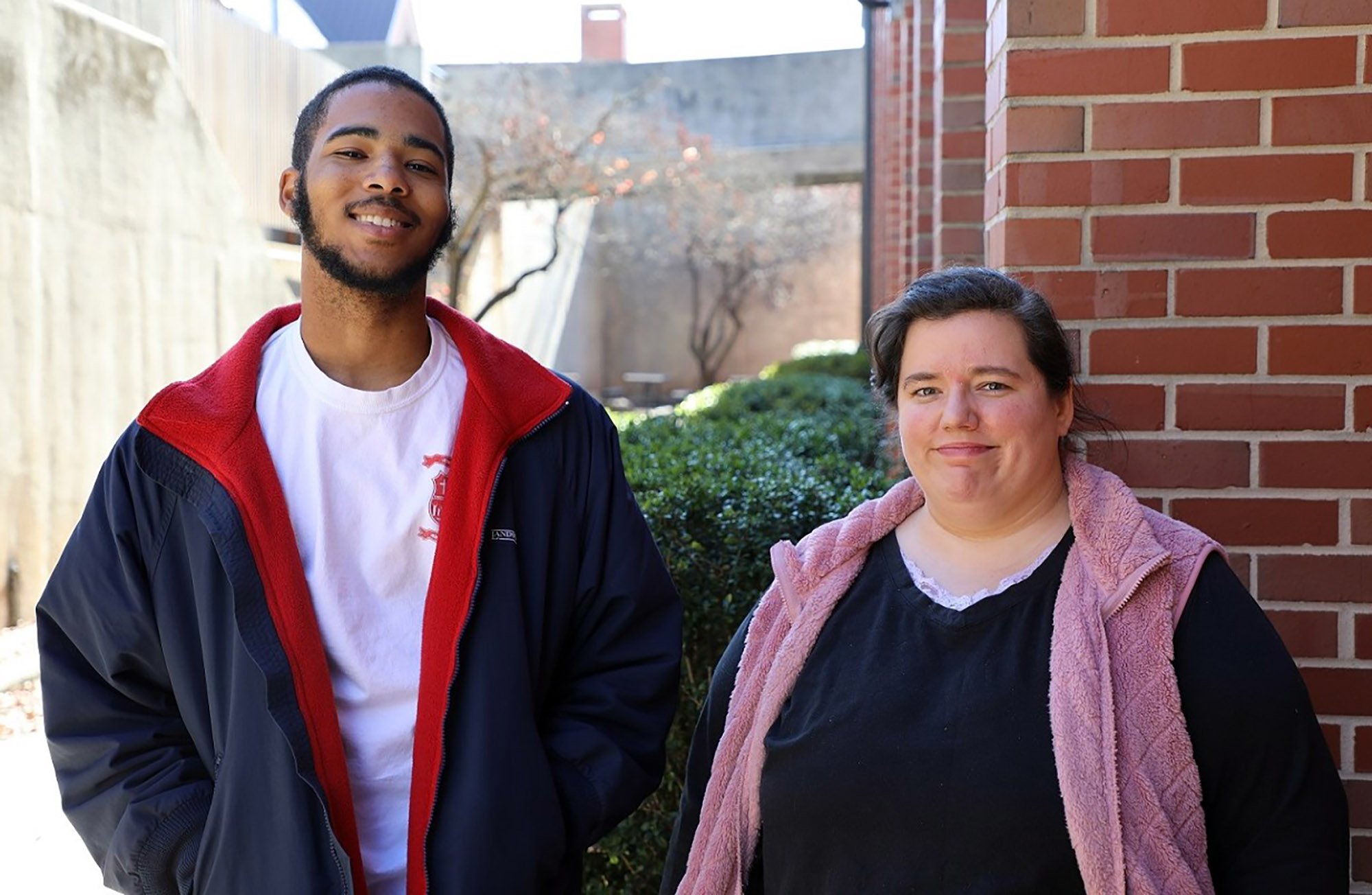 Durham Tech students Nathan Jenkins (left) and Felicia Sierra (right) were awarded a $1,500 grant in December to host voter engagement events on campus for the 2020 primary election. Their first event is set for Thursday on Durham Tech’s main campus. (Photo by Durham Tech)

Early voting for primary elections starts Thursday, Feb. 13, in Durham, and thanks to two students, Durham Technical Community College students will be able to engage in the political process in an exciting way.

The school’s Center for College and Community Service hosted “Coffee, Cupcakes and Counts” Thursday from 11:30 a.m.-2 p.m. at the school’s main campus on East Lawson Street.

The event included free specialty coffee drinks and cupcakes from Caffé Bellezza, a Durham-based mobile coffee bar. Students were also able to take a shuttle from the event to the early voting site at North Carolina Central University, which is the closest polling place to Durham Tech.

The event was planned by Durham Tech students Nathan Jenkins, 17, a Campus Vote Project Democracy Fellow, and Felicia Sierra, 31, a voter engagement work study student. Both students are passionate about voter engagement and encouraging their peers to vote.

The event was funded by a “Run With It” grant from Rise Inc., a 501(c)(4) student advocacy organization. The grants, each worth $1,500, provide funding to student groups to help their classmates overcome obstacles to voting.

Jenkins and Sierra applied for a grant in the fall semester with the help of Erin Riney, Durham Tech’s director of student engagement, and were awarded the funding in December.

Riney said that the grant writing process was a collaborative effort.

“Everybody played to their strengths,” Riney said. “Nathan’s got experience doing this and he’s very good at reflecting and analyzing, and they’re both good at brainstorming ideas about what would be the most effective use of the money. Then Felicia’s writing skills and organization skills really came into play, so it was very well rounded.”

The group’s original plan was to inform students about the state voter ID law, which was passed by a statewide referendum in the 2018 midterm elections. The law would have required voters to show a state-approved form of ID in order to cast their ballot, beginning with this year’s primary election.

But when a federal judge in late December blocked the voter ID law from taking effect, the plans changed.

Instead, the group is now focusing their efforts on informing students about where and how to vote, voter registration and the 2020 census.

Since many students rely on public transportation to get to and from Durham Tech, the group hopes that providing a shuttle directly to the polling place will make voting more convenient.

“If you have a car, that’s a quick in and out,” Riney said. “But a lot of students take the bus and it could add an extra hour to their day.”

Jenkins, who is a Middle College High School student taking classes at Durham Tech, is representative of Durham Tech’s youngest students. Since he will turn 18 before the November general election, he is eligible to vote for the first time during the primaries.

“I’ve been encouraging people to vote for a while now,” Jenkins said. “So now I get to set an example.”

Sierra said that it’s important to engage young voters because they are typically the voting demographic with the lowest turnout.

“Voter turnout for younger people and students tends to be lower than that for older people,” Sierra said. “I think that probably causes a political view that doesn’t represent students and what they’re going through and their needs.”

However, the group is aware that many students at the community college level are older and can share their wisdom with younger voters.

The group is planning to host another voter engagement event on campus before the early voting period ends on Feb. 29.

Overall, the group aims to have the events they host this election cycle encourage students of all ages and backgrounds to become informed, active citizens.

“It’s not just about engaging people,” Jenkins said. “It’s about being a member of your society and just making sure you understand people who are struggling.”

Korie Dean is a junior journalism major at UNC-CH from Efland. This spring she is serving as a staff writer/photographer for the Durham VOICE.