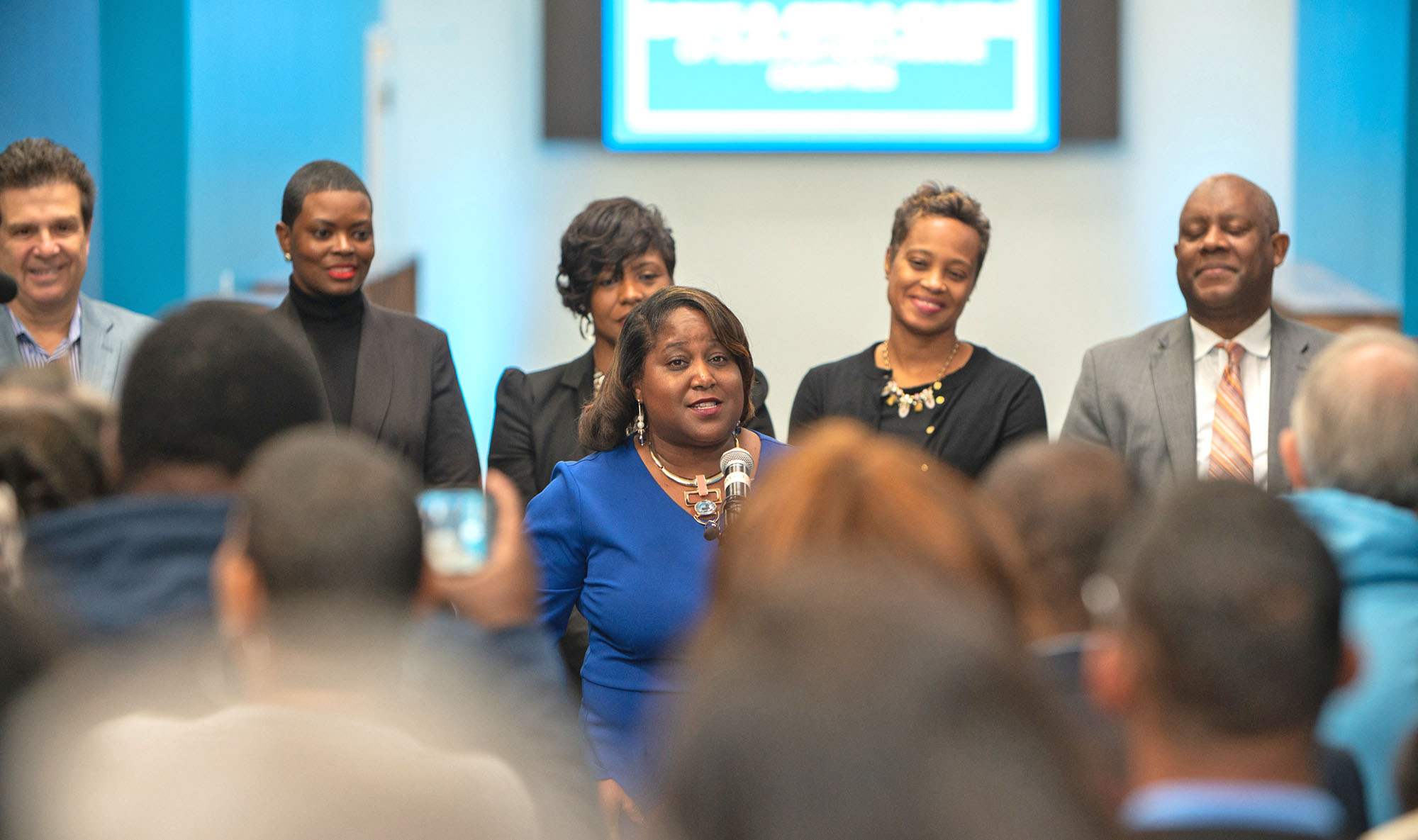 Cheryl Parquet, the director of community and diversity engagement for Blue Cross and Blue Shield of North Carolina, addressed the crowd at the opening of the new Boys & Girls Clubs of Durham and Orange Counties facility in South Durham on Jan. 6, 2020. “The goal of the Club was to be able to serve as a hub for the community,” Parquet said in a phone interview. Behind her, from left to right, are Sam DiFranco, Kimberly Williams, Montressa Sneed, Pam Hester and Travis Rouse. (Photo courtesy of Victoria Drake and the Boys & Girls Clubs of Durham and Orange Counties)

After outgrowing one of their previous locations, the Boys & Girls Clubs of Durham and Orange Counties were ready for a change of scenery.

The nonprofit organization rang in the new year with the opening of a new site on Jan. 6 at 1010 Martin Luther King Jr. Parkway in South Durham.

“I expect it will be a catalyst for bridging community resources,” Jerome Levisy, CEO of the clubs, said of the location in a phone interview.

The previous building was about 50 years old, Levisy said. An investment from Blue Cross and Blue Shield of North Carolina made it possible for the Durham Club to add a new basketball court, teen room and computer lab.

Levisy said the new club was able to keep all of the previous location’s attendees, and add new members at the same time. The investment will allow for the average daily membership to double to 220 children by the end of the year.

Former members have fond memories of the old Durham Club.

“It impacted me in a good way,” Miracle Harris, a 20-year-old from Durham who attended the Club in 2013 and 2014, said in a message. “It was a place where kids could get away and relax and calm their minds.”

Levisy plans to continue offering this experience for children in the new location.

The Durham Club charges $10 annually for membership, which allows children to participate in activities like yoga, dance, art and team building. They also get access to the club’s computer lab.

According to Victoria Drake, account coordinator at Ketchum, the clubs serve 400 children through after-school and summer camp programs each year. Without these programs, 88% of children in Durham and Orange counties would not get sufficient exercise after school and 68% would have their last meal of the day at school.

The organization identifies its core values as inclusion and opportunity, respect and belonging, empowerment, collaboration and advocacy.

“We do a comprehensive approach to youth development,” Levisy said.

Cheryl Parquet, the director of community and diversity engagement for Blue Cross NC, said the clubs have been a part of her life for many years. Through her work, she has helped find funding and support for the clubs.

Parquet said that the city of Durham buses students to the club after school, which will allow both students and parents to have better access to the resources that are available.

“I think it’s going to give them the opportunity just to grow,” Parquet said.

Not only will more students and parents have access to the club, community members of all ages will benefit from the space. During the day, before children arrive for after-school activities, the club will be open for other programs including senior fitness classes and workforce development programs.

“The goal of the club was to be able to serve as a hub for the community,” Parquet said.

Despite the successful opening, there is still work to be done.

“There are still things that need to be done in the club,” Parquet said. “I think people should continue to invest in the Boys & Girls Club if they have the opportunity to.”

“Don’t abandon us now,” he said. “We need you now more than ever to keep the doors open.”