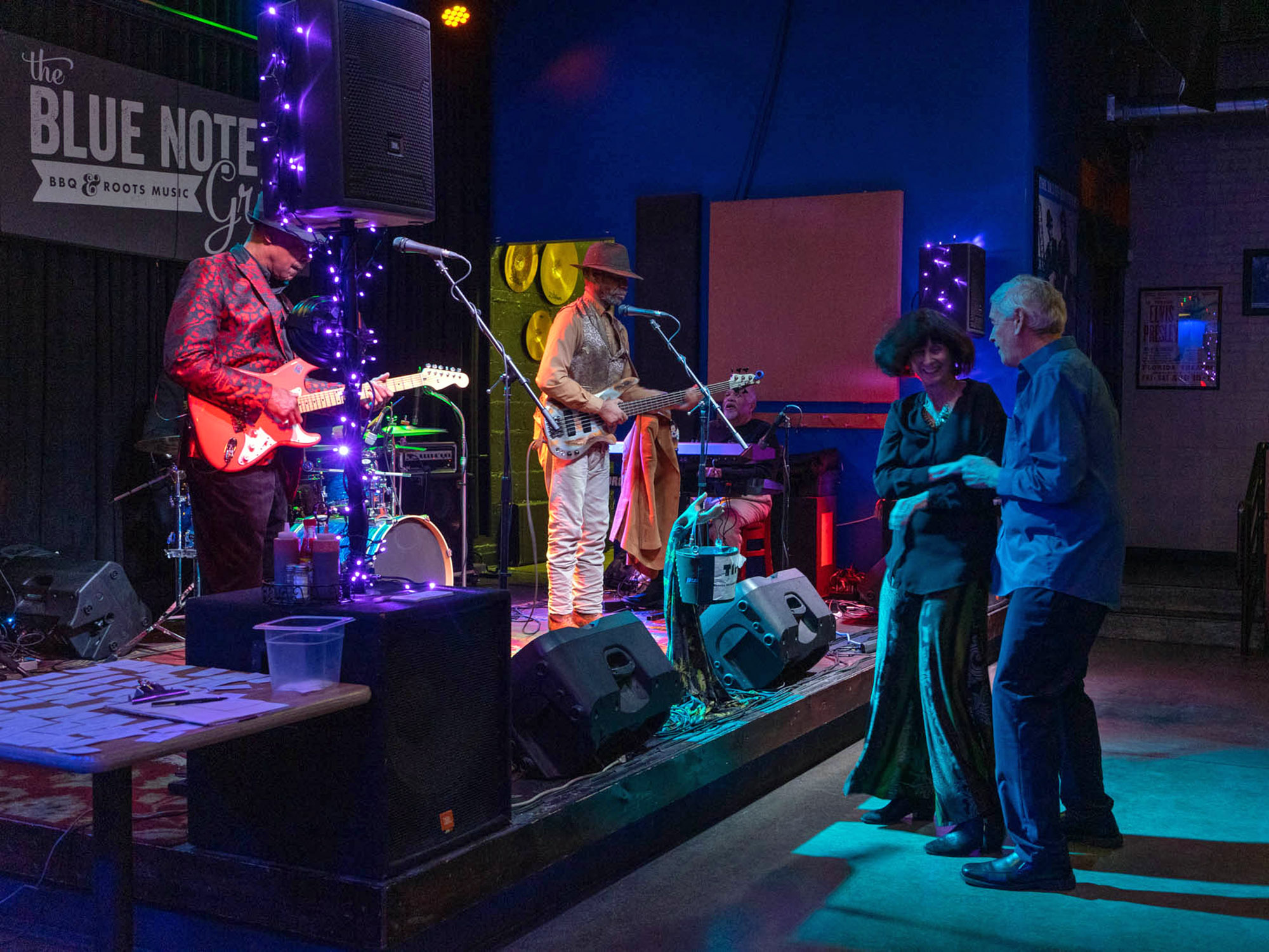 “Our first rule is…?” Brett Chambers called over packed tables painted in dim lights from the stage.

“Have fun!” the crowd shouted in unison.

And fun they had. Laughter and conversation filled The Blue Note Grill, 709 Washington St, for over an hour before any performance. When the music did start, people grooved in their seats, sang along and danced in front of the stage.

Most people who attended come out every Wednesday for Brett’s Open Mic.

“Where [else] can you go to get good food and music on Wednesday?” said Clare Bathé.

Mary Dilliner said she’s been attending the open mic for about a year because, “You come and have a good time and know everyone is here for the same reason.”

Alongside house band Brett and the Usual Suspects, normal folk joined in and performed. People like Dion Brown, custodial services supervisor for the city, who sang “Love T.K.O.” by Teddy Pendergrass.

Whoever you are, no matter what you do, you can sign up, throw your name in a bucket and perform at Chambers’ show.

Constance Prince, a singer from Durham, said the open mic gives a platform to performers who are not going professional.

“It gives me an opportunity to sing more,” Prince said.

“If you want to get out, try yourself, see how you are in front of people, this is the place to do it,” Whittington said.

But there are other rules at Brett’s Open Mic.

Brett and the Usual Suspects provide backline for the open mic. Alphonza Kee plays the bass, Delany McQuaig is on guitar and vocals, James ‘Coffee’ Yourse is at the piano and Chambers plays drums and trumpet.

Yourse has been with the open mic since day one, “or maybe day two,” he recalled with a grin.

The open mic started over 23 years ago in downtown Durham, Chambers said, and it’s survived rough times. Attendance was at its lowest after Hurricane Katrina when gas prices rose. The open mic even made it through the economic recession.

Over those years, Brett’s Open Mic found a home in many different venues, but it all started at downtown Durham’s Talk of the Town.

Chambers approached the owner at the time, Sam Sellers, and pitched his idea for an open mic.

Sellers agreed and told Chambers to come by Wednesday evening while he and his friends played cards.

“The first night we had 12 people,” Chambers said. “Six of them were the people in there playing cards: three musicians and three of my friends. At the end of the night, I was a little dejected.”

But Sellers said, “Hey, this is cool. Come back next week?”

“Yeah. That was your first night,” Sellers replied.

Chambers and his friends returned the next week to a larger crowd. By the third week, they filled the place.

After that, “It just became, ‘See you next week,’” Chambers said.

From there, they celebrated a one-year, a five-year and a 10-year anniversary, which eventually became the 23-year tradition they honor today.

“I’m just grateful that I still get to do this,” Chambers said. “It’s a privilege. It’s an honor.”

He asks that no one touch another person without permission.

The audience members appreciated this aspect of the open mic. Many commented on what a safe place it felt like Wednesday night.

Andrew Dundas is a junior journalism major at UNC-CH from Fairview. This spring he is serving as a staff writer/photographer with the Durham VOICE.