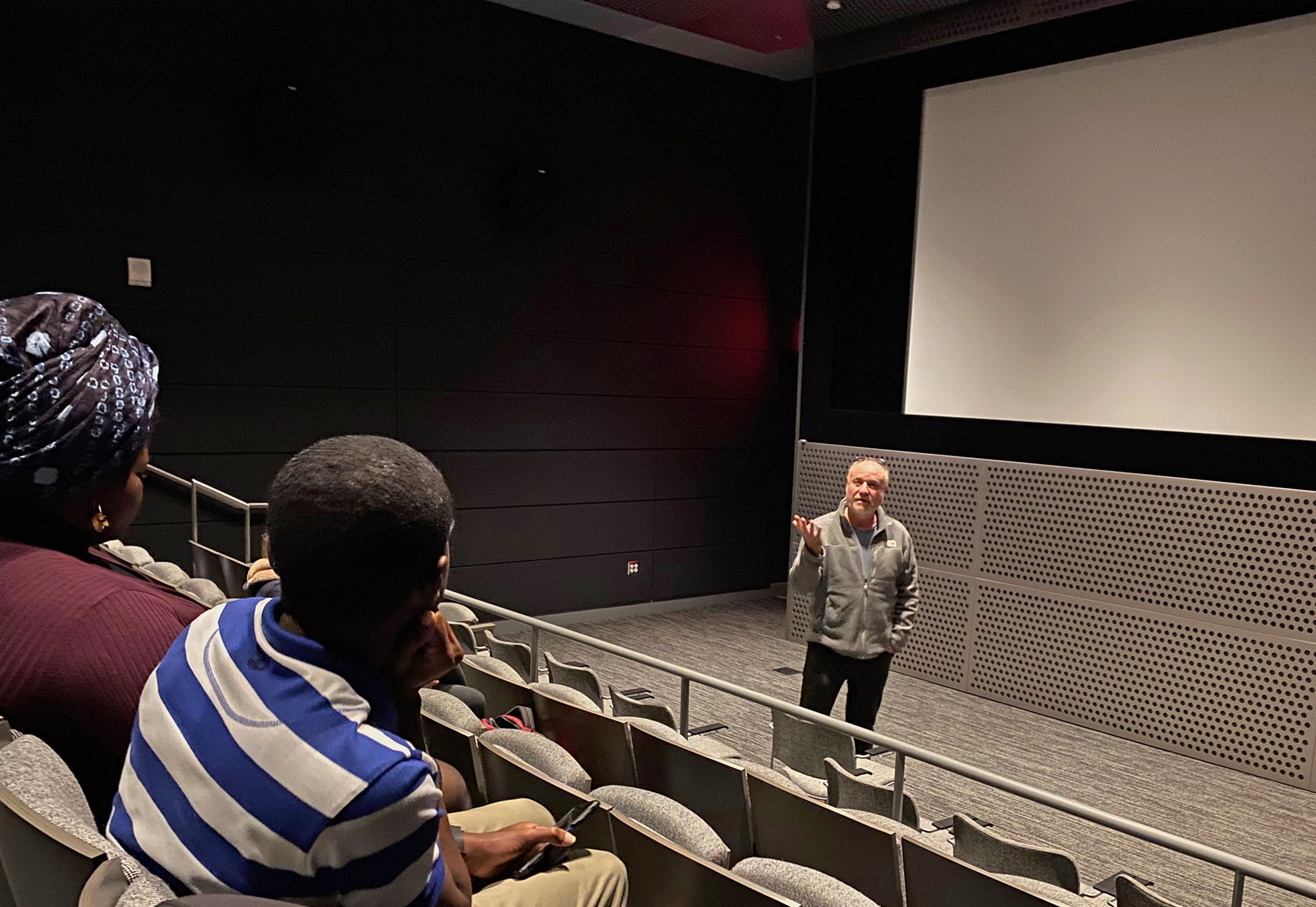 Charlie Piot (right), co-director of Duke University’s Africa Initiative, leads a discussion after the screening of Amina Weira’s “Anger in the Wind” during the university’s fifth-annual African Film Festival. The festival will hold different screenings every Wednesday in February from 6:30-8:30 p.m. at Rubenstein Arts Center. (Staff photo by Victor Hensley)

Mainland Africa is approximately 4,030 miles away from Durham, but Duke University is working to narrow the gap by bringing African stories to the campus community through film.

This month Duke is hosting its fifth-annual African Film Festival, featuring stories from around the continent. The four-week festival, organized by the university’s Africa Initiative, will hold free film screenings throughout February. A film will be shown every Wednesday from 6:30-8:30 p.m. in Rubenstein Arts Center.

“February is Black History Month, and we thought it’d be nice to stage it then, even though we’re not an African American group, per se,” Charlie Piot, co-director of the Africa Initiative, said. “People seem to be really engaged by it.”

The festival’s first screening on Feb. 5 showed filmmaker Amina Weira’s “Anger in the Wind.” The documentary centered on Weira’s hometown of Arlit located in northern Niger, and the devastating effects that uranium mining had on the community. Her documentary is a tale of resource extraction, a problem that continues to plague the people of Arlit today, even 45 years after the mining began.

This year, the stories hail from Niger (“Anger in the Wind”), Kenya (“Supa Modo”), Morocco (“Razzia”) and Mali (“Namballa Keita”). The genres of the selected films range from documentaries on extracted economies to dramas on “tales of lost loves and forbidden desires.”

The selection of films – and the origin of the festival itself – can be traced back to a visiting scholar at Duke, Amadou Fofana, from Senegal, who was eager to help the African Initiative with the festival during his time in Durham in 2016.

Despite the fact that Fofana is nearly 3,000 miles away working at Willamette University in Salem, Oregon, Piot continues to ask him for film recommendations every year.

Fofana said that while he cannot watch every film produced in Africa, he keeps an eye on ones shown at other film festivals that could appeal to students. However, Fofana noted the festival also appeals to individuals outside of the university.

While Duke hosts the festival, students and faculty are only a fraction of the people who generally attend the screenings. Some films attract as many as 40-50 attendees, and people with ties to the country the film is based on are often particularly interested in attending.

“Last year, for our Ethiopian film, a lot of Ethiopian folks in the area came, and they had nice insights into the film and could give local commentary with it,” Piot said. “We’ve often done pretty good outreach into the local community. There are a lot of Africans, folks from the continent, living in the Triangle.”

Durham has a fairly large African population outside of its universities, said Piot. It’s only grown as the number of refugees in the area has increased.

Since 2002, a total of 1,233 refugees have relocated to Durham from the African continent, according to the Refugee Processing Center. Due to this trend, the events organized by the Africa Initiative are of particular interest and importance to the community.

The Initiative’s 40 events each year – film screenings, discussions, concerts, conferences and more – work to bridge the gap between the campus and the African community. The programming can even impact individuals with no connection to the continent.

“This event is really important for (non-Africans) to come and see because the idea of Africa being some desolate, faraway place, far removed from the rest of the world, is really harming the continent,” said Afi Bello, a Durham resident and Togo native. “It’s good to have these spaces where people come and learn about this stuff.”

After each screening a discussion about the film is held, which is typically led by a graduate student at Duke. Filmmaker Cherif Keita will be in attendance to lead the discussion on his film “Namballa Keita” on Feb. 26.

For many, these films could be one of their first glimpses into the lives and art produced by Africans, giving the continent exposure it doesn’t typically receive.

“These films are underrepresented and they tell stories that I think need to be put out there about the experiences of people from the African continent and not just narratives that are told from the Eurocentric perspective,” Bello said. “I really appreciate the festival for bringing out actual Africa.”