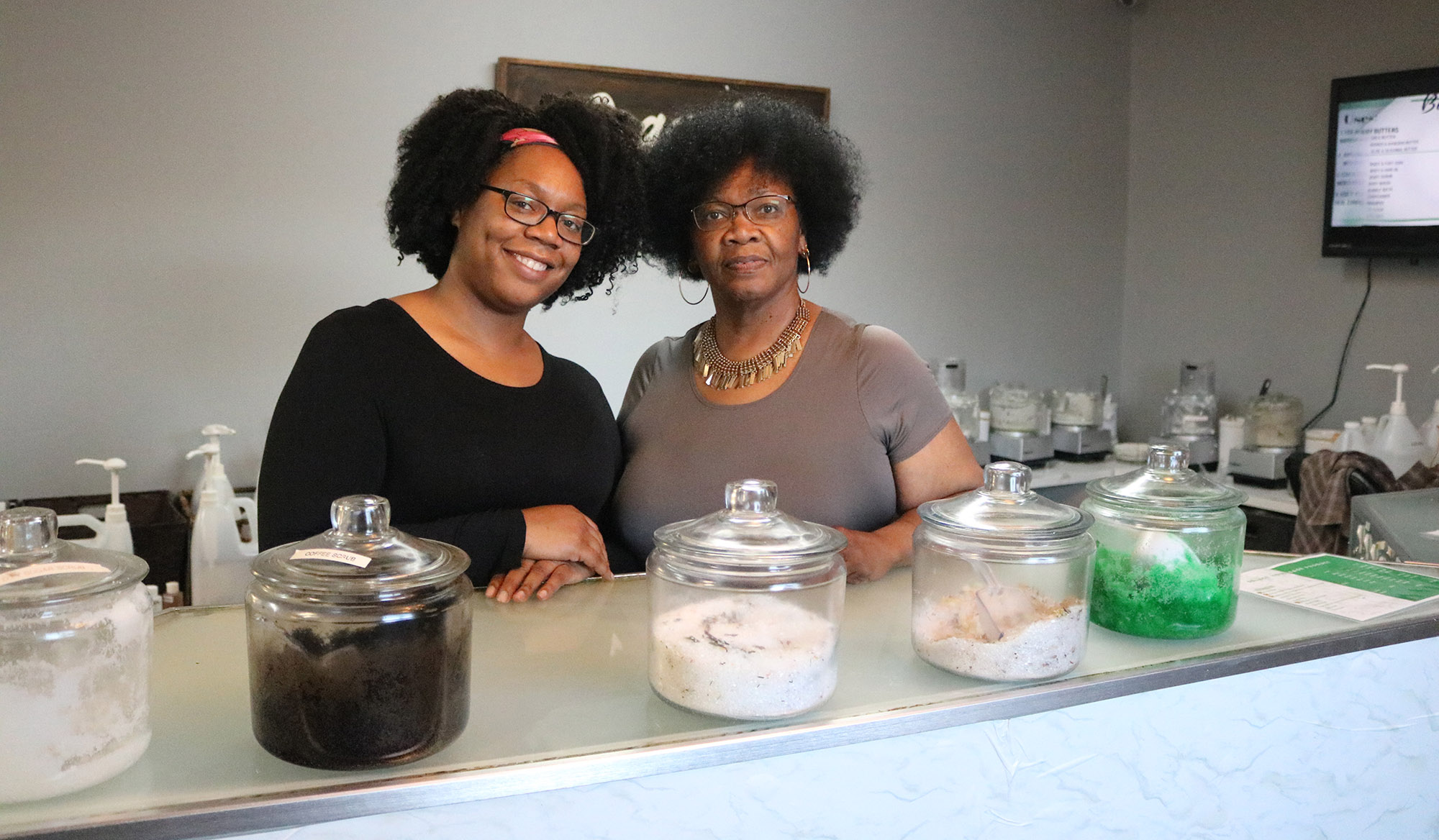 Mother and daughter Val and Joi Jackson at the “beauty bar” of their co-owned beauty store, Hairizon. The beauty bar is where Val and Joi customize products for their customers. (Staff photo by Celia Farmer)

Mother-daughter duo Val and Joi Jackson started their business with just $500 and a dream of affordable natural hair care.

Val Jackson, 63, a clinical data specialist from Durham, and her daughter, Joi Jackson, 38, from Durham, co-own Hairizon, a beauty store located on 3119 Guess Rd. in Durham, North Carolina. Hairizon has been in business going on 10 years now, and they intend to grow, although Durham will be their flagship location.

“We love it here, and we want Durham to love us,” said Val Jackson.

Hairizon works to be active in the Durham community. “Every Friday we send out a community letter. If there is a cause, or another event within Durham, we shoot that to all of our customers. There’s about 5,000 people on that list,” said Joi Jackson. Hairizon also advocated on their social media in response to the McDougald Terrace incident. In advocacy outside of the Durham community, Hairizon also functioned as a drop-off site for water for Flint, Michigan.

La’Keisha Butts (who goes by BlackBird), 41, who recently relocated to Durham from the Baltimore Metropolitan area, is a retired U.S. Federal Government systems administrator, creative intuitive and Reiki master teacher who collaborates on events with Hairizon. Butts said of Hairizon, “[It] exemplifies the principle of Ujamaa. Hairizon allows usage of their space for local business owners to promote and foster relationships with the community. Hairizon serves the city of Durham by hosting informative and interactive workshops, pop-ups and community events.” Recently, Hairizon donated children’s dashiki’s to a local church.

Hairizon’s community focus echoes in its business. Brittney Carter, 27, an entrepreneur, sales associate at Hairizon and full-time preschool teacher from Columbia, South Carolina, said, “The best part of working here is how family-oriented it is. I feel like Miss Joi is my sister and Miss Val is my mom.” Joi Jackson is helping Carter with grant writing for her entrepreneurship within her non-profit, Think Positive, Live Life Happy. “It’s not just about working here. [Joi Jackson] also looks into what you’re doing to see how she can help you because she wants young folks to grow and to also be entrepreneurs just like herself.”

Joi Jackson began envisioning a store for affordable natural hair care while in college at UNC-Charlotte. Jackson and her roommate decided to go natural because of the difficulty of scheduling hair appointments around schoolwork. “Once they were transitioning into getting natural without any type of chemical in their hair, they found that they couldn’t find good products, and their hair started to dry and break. When they would find good products, it was always on the internet, and then it would cost an arm and a leg,” said Val Jackson. “She was calling me every week, ‘Mama, I need $25 shipping and handling costs.’ That was the birth of Hairizon—The dawn of natural hair care.”

“The big boxes aren’t going to make one shampoo for one person, but we as a small business can definitely do that. If you have itchy scalp, or you want growth, or you color, we will make a shampoo just for you,” said Joi Jackson.

Customization is important to Hairizon’s customers.

Val Jackson shared a story about a father and mother trying to uplift their pre-teen daughter who struggled with self-confidence due to acne. “We were able to whip up a moisturizing facial cream for her, and we made a body mist for her and she was able to customize the scent, and you could see the confidence coming up in her because she knew it smelled good and she was thinking, ‘This is mine; it’s custom for me and nobody else is going to have this.”

Joi Jackson shared a similar story: “What stands out for me is when customers come in and have hair loss issues like alopecia. I remember this one gentleman was so excited, he came in the door and was just glowing. He was like, ‘I haven’t had to have a hair cut in three years!” and he ripped his hat off and he had a little bit of hair that was growing, and he was so happy.”

“Those kinds of stories make it worth it,” said Joi Jackson.

Brooklyn Brown is a senior graphic design and English major at UNC-CH from Cherokee. This spring she is serving as a staff writer/photographer for the Durham VOICE.